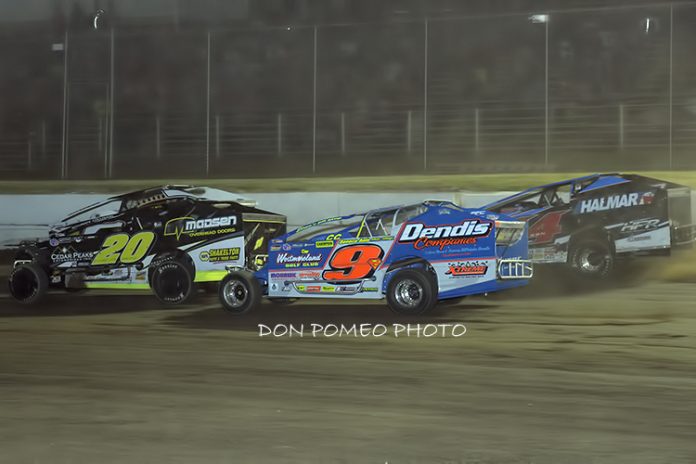 Who would think that 67 laps on a quarter mile track would be that exhausting?

Matt Sheppard, Brett Hearn and Jimmy Phelps really had their work cut out for them in the latest Super Dirt Series stop at Five Mile Point on Sunday night.

The eventual winner Sheppard started sixth, Hearn was on the pole and Phelps was way back in 16th when the field took the green.

Early on the wheel to wheel racing up front included the likes of Tyler Siri, Stewart Friesen, Billy Decker and Larry Wight, but in the end it was the 9s, 20 and 98H posing for the post race photos.

He would take the lead and try to get into a rhythm only to have the yellow flag fly. Matt noted, “The yellows kept us out of traffic, but I still had my concerns as a bald tire here will kill your chances. I thought several times that we had crossed the line when the yellow came out, but we stayed in that lap.”

Matt noted the car was easy to drive and he “just had to keep it straight.”

Meanwhile, Hearn settled for second and he wasn’t disappointed.

Brett said, “It’s not bad at all. This is only my second time racing at Five Mile Point in the past 20 years.”

He was challenging in traffic and appeared to be moving well late in the race as the gap between first and second closed a bit.

Hearn explained, “The right front was shaking badly. I didn’t know if it was a tire or something was breaking. I decided just to keep a steady pace. It was a good run, but there was not any way I was going to pass him so we’ll take second.”

Phelps put on the top run for the podium finish after starting a disappointing 16th.

After climbing from his car Phelps said, “I just needed track position. We struggled with qualifying tonight and had a tough time in our heat race.”

Strategy was basically the determining factor for the final finish as Jimmy explained, “It was good for a while and we got up toward the front, but I really wasn’t able to go too much further as I did not want to beat up the tires. I needed to keep the right rear tire on and could only push so far.’

However he felt it was a good run and “good to be back” on the podium.

He started back outside of the eighth row, but by the 21st lap was sitting in seventh and then started to click them off as he moved into the top five on the 24th lap passing Tyler Siri. By lap 47 he was fourth and on the 54th third place Billy Decker sustained a flat and Phelps got to third just where he finished.

It was bullring racing at Five Mile Point on Sunday night, but the drivers on the podium were pretty content that they were able to survive on what has been known as a tire eating race track.