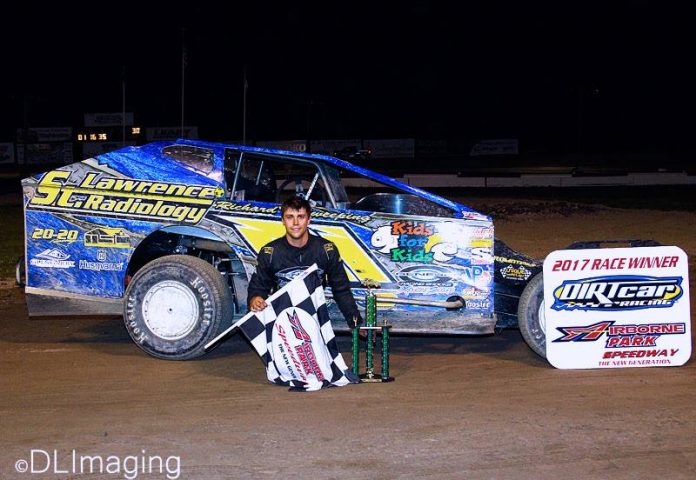 Chris Raabe couldn’t be happier with the start to the season that he’s had at the newly revamped Airborne Park Speedway. Coming into action on Saturday night, the Alexandria, Ont., pilot had won two of the first three events at the Plattsburg, N.Y., track with Mike Perrotte the only other driver to reach Victory Lane. Needless to say after this week’s 30-lap feature, he’s now three for four.

“We’ve definitely had a great start,” commented Raabe afterwards. “We’ve had a little bit of good luck. Coming to a new race track, no really knows where to start for a baseline setup. We’ve been fairly close right off the get go.”

Raabe’s win Saturday came after a late caution and an impressive battle with Gage Morin and Perrotte. Perrotte had checked out but the caution brought him back to the field. Raabe went to the outside to take the lead as Perrotte protected the bottom of the racing surface with only a handful of laps to go.

“That caution was a deal breaker in the race,” stated Raabe. “I wouldn’t have caught Mike (Perrotte). I got a bad start but was able to recover and chase him down. I was just trying to carry as much speed as I could. Sometimes the bottom is there and you got to use it, but tonight we were able to roll the top.”

Like everyone else, it continues to be a learning process at Airborne after it was decided over the off-season to lay down dirt. Raabe had nothing but compliments for the entire staff at the track for what they’ve done so far.

“This place has done a terrific job,” mentioned Raabe. “It goes to show it with the number of people here. It’s a neat facility. Denis Moquin is on the one-way, they are real professional. The whole team is doing a great job here at Airborne.”

MORIN MUSCLES HIS WAY TO SECOND

It was a tight four car battle at the front of the field late in the feature with Raabe, Perrotte, Gage Morin and George Foley all vying for the victory. Morin ended up out dueling everyone but Raabe to come across the line in the runner-up position.

“That was a good race,” he said. “Congrats to Raabe. He’s real good when it’s a little tackier and rough like that. I was hoping that it was going to slicken off a little more for us. That’s where we’ve been running good. We’re happy. There is a tough group of guys here. Tonight we were quick for a while. I thought we had a shot, but it just didn’t blow off as much as I hoped.”

Like Raabe, Morin is off a decent start at Airborne. He’s got all podium finishes except for one. He finished outside the top five after having a tire go down. Other than that it’s been a great experience since the Cornwall, Ont., driver moved his weekly campaign to Airborne on Saturday’s after calling Brockville Ontario Speedway home last season.

“I just like to change things up,” said the 24-year-old. “You run the same place so long I find you don’t learn as much. We figured we’d change it up. They have a great facility here. The pits are all paved, it’s clean. The racing has been good. More or less we just wanted to change it up. It’s a just a nice place to race. We are going to stick with it a bit and see how it treats for the rest of the year I think.”

Perrotte earned his first win in any motorsports competitions in several years back on June 3 at Airborne. It was his first victory since 2014 in which he won an asphalt race in Canada. The Plattsburg, N.Y., pilot nearly pulled off another upset victory Saturday night.  The team struggled the first two weeks as they blew an engine in week one and broke the power steering in week two. Saturday, Perrotte wrestled the lead away from Foley during the 30 lapper only to have Raabe get by him on a late restart.

“They were just better than I was,” commented Perrotte afterwards. “I couldn’t get through the holes as good as they could. Those guys were really good. Last week it was great to win, but tonight was fun. I really forgot how much fun it is to race close to him. I haven’t been able to do that since ’89. I live two miles from here so it’s been really good.”

Perrotte was able to take the lead on the high-side of the speedway before he migrated back to the bottom. He was questioning himself afterwards if he made the right decision to go down low.

“I don’t know,” he said about changing lanes. “George was hanging with me pretty good on bottom. The top is further around. Once I saw Raabe get to second, he’s been pretty tough on the bottom so I figured I’d stay down there. The top was good too, there wasn’t much I could do to hold him off.”

Perrotte indicated he won’t be able to compete weekly. His main focus remains his position with World Racing Group as Head of Series and Sanctioning for DIRTcar Northeast.

Saturday night 15 358-Modifieds signed in for competition with John Lutes Jr., and Travis Billington each making their first starts of the season at the track…

The average car count has hovered in the mid to upper teens since returning to the dirt. The Sportsman count was exceptional with 26 cars in the pits…

Based on conversations with several of the drivers, the surface has continued to improve each week as Bruce Richards, former Albany-Saratoga and Devils Bowl Speedway promoter, works his magic…