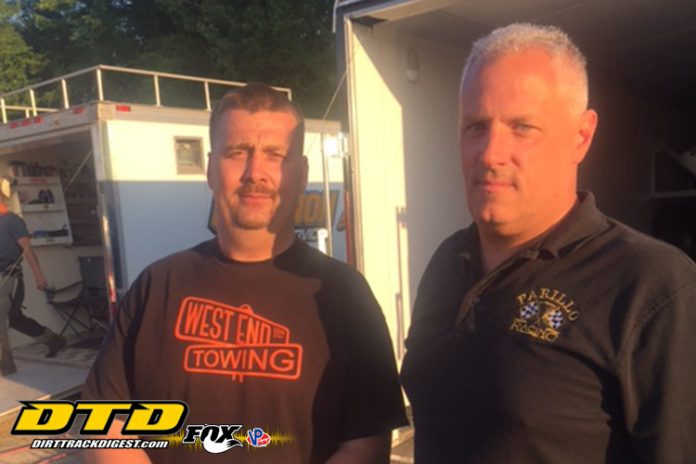 Once again there is a new era coming to Glen Ridge Motorsports Park, the locally popular 1/4 mile dirt oval on the hill in Glen, N.Y. only a few miles from the historic Fonda Speedway.

On Wednesday evening we were invited to a meeting in Amsterdam that would lay out the changes scheduled to take place at The Ridge. After many rumors and stories this past few weeks we finally had a chance to sit down with the faces that would be taking the reigns of this great little oval. Mike Parillo and Ray Sefrin are the two who will take on this challenging project, as co-promoters. The project to bring back the cars and the fans to The Ridge. These two that have been part of the racing community in many capacities will be joined by Rob Hazer as Race Director and PR. Joe Kriss will continue as head starter and Jim King will continue his announcing duties.

Any and all questions were answered in a friendly manner, a copy of the payoff was passed out and explained. First and foremost the racing night will change to Sunday nights with warmups at 5:30 pm and racing starting at 6:00 pm with a plan for things to conclude by 9:00 pm. Highlighting the racing action on Sunday nights each week will be the Crate Modifieds that will run under the DIRTcar Sportsman Modified rules. This will be the headline division going forward and with 20 cars will pay $750 to win and $75 to start. With 19 cars or less the purse will be $600 to win and $50 to start. The payoff will be posted on the website as soon as the new site is up a running.

Along with the Crate Modified the weekly card will include Limited Sportsman, and 4-Cylinders and currently the track is looking for feedback from Street Stock drivers about the possibility of becoming part of the program should a minimum of 10 drivers be committed to running weekly. There is also a possible special for the division in the works. Alternating divisions to run will be the POWRi Midget Sprints, Sling Shots, and Vintage Mods with the IMCA a possibility if there are 10 cars committed to run.

Grandstand admissions are going down under the new team; $8 for adults, $6 for seniors, and $2 for children 11 and under. Food prices are also going to come down per Ray Sefrin and Mike Parillo has plans to upgrade the facility. With all the changes we wish them success and look forward to racing at The Ridge.

On Friday at Albany-Saratoga we stopped by the Tim Hartman, Jr. pit area to ask how his season was going so far. Tim said he has had more issues than he has ever had this year; lost two motors and a transmission. That’s very unusual for an always well prepared team. We also asked Tim whether he might change his racing schedule to race at Glen Ridge on Sundays and he quickly responded that with his car owner taking over at Glen Ridge the team feels it is only right they support Mike Parillo and his new endeavor.

“Mike has always treated us very well,” said the Hartmans. Tim and his dad both said that Mike left the decision up to them. Our next stop was at the Sportsman pit of Andrew Buff, driver of the No. 98 at the Malta oval each week. Andrew raced in go karts for nine years before moving up to the open wheel division nearly three years ago. A few weeks ago Andrew took a wild ride and had his bell rung and was taken to the hospital by the ambulance. Andrew said he was glad to have the great safety service at the track. Andrew is 19-years-old and works at Capital City Produce to support his racing efforts. He is a second generation driver, his father Kevin drove in the IMCA division when we first met the Buff family. Andrew’s dad stopped racing when he began. In the night’s Sportsman feature he took advantage of his front row starting spot to lead the feature for the first 21 laps.. On the restart after a late race caution, Connor Cleveland was able to get by the young driver for the win. Andrew had to settle for second but a win is certainly coming. As we headed to the tower for the features we spotted a No. 116 Pro Stock near the pit entry gate with the driver moving around seeming to get his equipment in order. The car was not one we were familiar with and we found out why. It was Ron Delease, Jr.’s first night at the track. Ron raced some 20 years ago but stopped and decided that he would return when he could do so without using household money. Most of his racing was done at Devil’s Bowl on Friday he was at the Great Race Place to shake down his car. He said he was thankful for all the help he had received from fellow drivers. Whenever we head to Albany Saratoga we do not have to stop and eat on the way. We’ve had people ask in the past, do you go there to eat? In this case the answer is yes. We know we can get a variety of good food that makes the evening much more enjoyable and for Ed it’s sometimes the small stuff and on Friday it was the fact that when he went to get coffee they asked if he wanted regular or decaf. It’s rare to find decaf coffee at a track and on Friday it was served by, Brittany, another of the friendly people working the concession stands at the Great Race Place.

Until next week please send all new and/or comments to biittig@yahoo.com