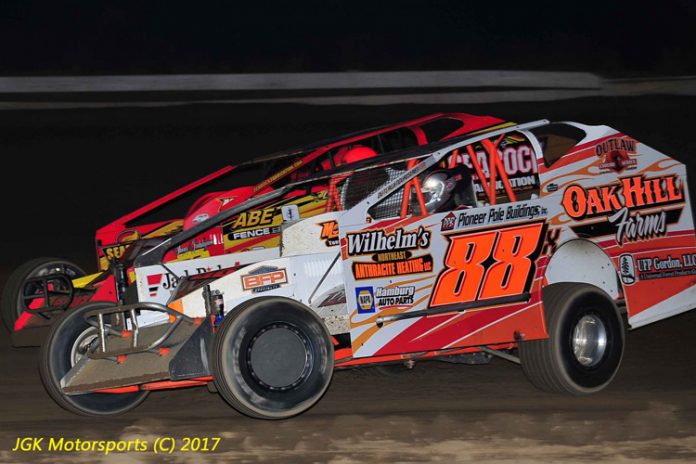 For the second weekend in a row the weather decided to cooperate with our local Modified scene allowing everyone to get their shows in. As the weather starts to heat up so has the action on the track. There were several close and hard battles this weekend in the modified features. On Saturday night it was quite a contrast of winners. At Grandview Speedway you had the grizzled veteran Frank Cozze outworking the balance of the field to earn the victory and on the opposite end at New Egypt Speedway it was youngster Andrew Bohn earning his first ever career 358 victory after a hard fought battle with PJ Oliver who was also looking for that elusive first career win. At Big Diamond there were double features on the card for the night. Craig Von Dohren used a lapped car to his advantage to get Ryan Godown and go onto win the makeup feature. The regularly scheduled feature found Ryan Godown muscling his way by Brett Kressley on the last lap to take the hard fought victory.

Big Diamond Speedway 6/09/17 – Twin features for the Modifieds were on the card last Friday night on a beautiful evening at the track nestled up in “God’s Country.”

In the makeup 25-lap feature run before the regularly scheduled night’s show, it was Craig Von Dohren who came from his 12th starting spot to take the checkered flag. Von Dohren driving the Dave Dissinger #88X Bicknell used some early moves in traffic to get by a few of the top runners in the main-event. Once the field started to separate, Von Dohren was on the move and was able to get to the early leader Godown’s back bumper on lap 13. Using a lapped car to his advantage, Von Dohren was able to get by Godown going down the backstretch on the same lap and was never headed after that point. The win for Von Dohren was his 85th career 358-Modified victory at the speedway.

In the regularly scheduled 25-lap feature, it looked liked Brett Kressley was finally going to shake off the bad luck that has plagued his family owned racing team in 2017. Kressley has been fast all year but has a multitude of engine and mechanical woes derail the season.

One of the rewards, if you can call it that is when you have such bad luck, you usually end up with a really good starting spot in the feature event at some point or another. Kressley looked like he was going to take advantage of that when he jumped out and led the feature event early and it surely looked like this was going to be his night to shine.

Unfortunately for Kressley, Godown had other plans. Godown who also has had his share of bad luck and mechanical gremlins this season at Big Diamond was on the move early looking to improve on his runner-up finish in the night’s earlier run makeup feature event.

Kressley looked like he had the race in hand with Godown looking like he was going to have to settle for yet another runner-up finish. But as happens often at Big Diamond Speedway is that lapped traffic always seems to play a part in the final outcome and this night was no different. With Kressley approaching the last two turns on his way to the win a lapped car refusing to hold it’s line was in his way making the young driver have to decide what line to take to protect his lead. While all this was going on, Godown like any good drive would, saw an opportunity to strike like a snake going after his prey and immediately took advantage of the situation. Using a little muscle along the way, Godown was able to sneak by Kressley coming out of the turn to win by the smallest of margins.

A disappointed Kressley held on for second with Jeff Strunk, Billy Pauch Jr and Kevin Beach rounding the top five.

Von Dohren is the current point leader with a 10 point advantage of Jeff Strunk. Billy Pauch Jr, Rick Laubach and Kevin Beach are the top five in the chase for the track championship.
The 358-Modifieds will take this Friday off. The Sportsman, Roadrunners, Street Stocks, Vintage Cars. Kim’s Kreations Mechanics Race & Enduro fill the card for this Friday’s June 16th racing card.

Grandview Speedway 6/10/17 – It was a hard fought night Saturday night “On the Hill”. By night’s end there were tempers flaring, drivers pointing fingers at each other and battles going on all through the field. At the conclusion of the night it was the veteran driver out of Wind Gap, Pa., Frank Cozze taking home the night’s hardware. For Cozze it was his fifth career 358 victory to go along with two big-block victories at the speedway.

John Willman was the early race leader with Colt Harris close behind. Cozze was on the move early on.  By the time the caution flag flew on lap 15, he was up to second. On the restart it looked like Cozze got a little out of shape coming down the homestretch and came together with Willman forcing Willman to spin and hit the yuke tire head on thus ending his night. As you would imagine the Birdsboro, Pa., driver was none too happy with Cozze at that point.

When the race resumed it was Cozze out front but the action behind him was heated and furious. There were numerous hard battles going on all throughout the top ten. With all the hard racing behind him Cozze just had to keep it on the rails going forward and keep his nose clean.

When it looked like Cozze had it locked up for the win, the caution appeared once again for Harris who went head on into the third turn wall. Harris had to be restrained by a track official after getting out of his car and looking for the driver he deemed to have been the cause of his night ending crash.

With the field closed back up on Cozze’s rear bumper, and the cream starting to rise to the top, it would take all Cozze had to hang on to the lead. Not on this night though, Cozze had it go all his way as the field continued to battle hard behind him. Cozze would never be challenged and took the win.

New Egypt Speedway 6/10/17 – You always remember the first time you did anything special in your life and this past Saturday night young Andrew Bohn had a night he will never forget. Bohn, who comes from a family that is deeply rooted in the racing world, had his dream come true on Saturday by taking the 30-lap main-event at New Egypt Speedway.
Bohn had to hold off another driver also looking for his first ever career Modified win in PJ Oliver. Oliver has had a solid year this season and that elusive first win is right around the corner for him as well.

But it would have to wait at least another week as this night belonged to Bohn. Wheeling the Reid Sod Farm #659 he grabbed the lead at the drop of the green flag and was never heeded after that. But to think it was easy is an understatement. Oliver was on the move early and by the halfway point had taken over the runner-up spot from Chad Barney and started to move in on the leader Bohn.

After a caution flag on lap 20 for a strong running Ryan Krachum, Bohn now had Oliver right with him. Oliver gave it all he could on the restart and was all over Bohn looking for the leader, but the young driver wasn’t going to give it up on this night and was able to hold off Oliver to take the crown pleasing win. Oliver held off a strong running Danny Bouc to finish second with Bouc third, Ryan Godown fourth and Billy Pauch Jr in fifth.

Just as a reminder, coming up on Tuesday June 27th at New Egypt Speedway is the “Garden State Gunfight”. It will be the mighty Big Blocks vs the Small Blocks going at it for 60 lap and the $6000 top prize. Should be a great field of Modifieds on hand for that one.

Bridgeport Speedway 6/03/17 – The South Jersey oval was dark this Saturday night due to Thursday’s running of the Poker Series race.

NJ/PA drivers Ryan Watt and Frank Cozze ventured up to the Five Mile Point Speedway on Sunday to take on the stars and cars of the Super DIRTcar Series. Cozze, who pitted early. fared the better of the two with a ninth place finish. Watt ran strong throughout the main-event running in the top ten the whole time until a right rear tire went flat with only three laps remaining relegating Watt to a 22nd place finish. Certainly not indicative of how Watt ran…

It’s off tonight (Tuesday) to Grandview Speedway for round #2 of the Bob Miller “Thunder on the Hill” series. Tonight’s racing card is the always popular USAC Wingless 410 Sprints along with the 358-Modifieds. This is a show that I look forward to on my calendar each and every year as the wingless cars and stars of USAC always seem to put on a tremendous show. The late Bryan Clauson was the winner of last year’s race at Grandview. It sure won’t be the same without him there this year…

DRIVER OF THE WEEK: There is no doubt on who is the winner of this week’s version of “Driver of the Week”. It can go to none other than Andrew Bohn for winning his first ever career Modified race. Congratulations to Andrew and the whole Reid’s Sod Farm team on their accomplishment.