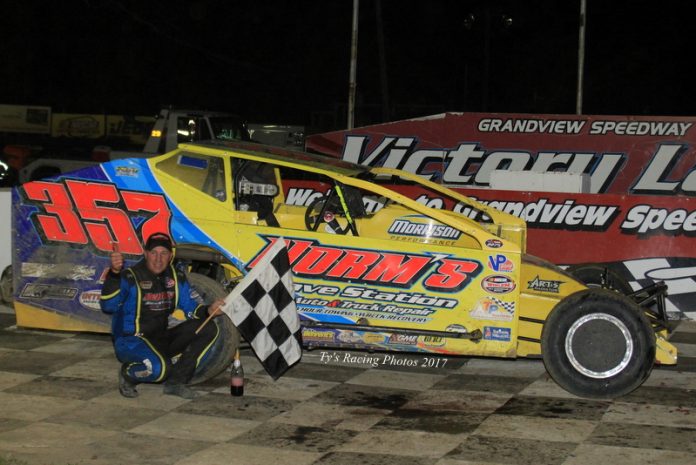 BECHTELLSVILLE, PA – For years the competition at Grandview Speedway has often been described as not only intense but as good as seen at any other racetrack on the Northeast Modified scene. But so far in 2017 it has been second to none. With seven different winners in seven different shows it has been as competitive as it ever has been. If you need something else to make that point just look as to who has been shut out of the winners circle so far this year. Both of the drivers that rank #1 & #2 on the track’s all-time career win list Craig Von Dohren and Duane Howard. Leaving Jeff Strunk as the only driver of the track’s big three to have garnered a win so far this year.

Which brings us to Tuesday night’s Bob Miller promoted “Thunder on the Hill” presentation. At a track that the Modifieds are usually the headliner, on this night they were forced to play second fiddle to the USAC AMSOIL National Sprint Car Series as they begin their ever popular “Eastern Storm” rampage thru our area.

Duane Howard is a driver that is accustomed to winning early and often at Grandview Speedway and even though Howard sits third in the race for the 2017 track championship, the Oley, Pa., driver and his Norm Hansell owned #357 team have admittedly struggled mightily so far this year.

Tuesday was the night that Howard and the team had hoped for in getting the team going forward to set them up for a good summer run. Howard started fifth in the 30-lap feature event.  After getting by a strong running Mike Gular with less than ten laps to go he was able to hold off his arch rival Von Dohren to grab the big win. Howard talked about how the team has struggled so far this year at Grandview and how they were able to win tonight’s race.

“You know, we have struggled here so far this year, mostly in our qualifying. The competition is so tough here it’s been really hard to get into a handicapped spot in the heat race. But man does it feel really good to get this win tonight. We’ve been good the last couple of weeks early on in the feature, but in the last ten to fifteen laps we seem to go backwards. So tonight we didn’t make any stupid mistakes in setting the car up for the feature. The car worked really well in the heat race so before the feature we didn’t change much on it and it worked out for us tonight. Norm and this team work really hard on these cars and it’s great to finally get a win for them.”

The key to winning the race tonight for Howard was being able to get by both Von Dohren and Strunk, who had both started in front of him, in the opening laps of the feature.

“This Bicknell car was really free enough early, usually we are too tight early in these races but tonight we were real free and I could drive the car instead of the car driving me. I was able to get by both of them early and that made them have to chase me instead of me chasing them. After we got by them the car just kept taking off and coming in and getting faster and faster. The car just had a really good balance tonight and I was able to put in anywhere I wanted.”

Track conditions usually play a big part in the “TOTH” races especially when the Sprint Cars are the main attraction and their feature is held before the Modified feature. When this happens usually the track is a one lane on the bottom track due to the Sprint Cars with their huge right rear Hoosier tires blowing off the top groove leaving the Modifieds with virtually no grip in the top lane. Tonight was a different story, in the Modified drivers meeting, promoter Bob Miller promised the drivers they would do the best they can to provide a raceable track for their feature race. At night’s end they came through with that promise and Howard was quick to point out how racy the track was on the night.

“The track was really racy tonight. You know slick racing is good racing and we’ve been fighting  a lot of bite here so far with this new clay.  The Roger’s seem to have gotten this down pat now and I think we are going to see good racing all year long. We should be able to come from the back now probably. When this track is at its best is when there are multiple grooves. Tonight the bottom was good and there seemed to be a buffer zone in the middle if you got hung there and there was also a top groove you could run. The top sort of went away their late in the race tonight because the Sprint Cars had blown it off up there. All in all it was a good race track tonight.”

I have had many occasions to talk to Howard over the past few years not only after the races doing interviews but also before and during the night’s action. The one thing Howard has always told me is that he is a driver that needs to have confidence in himself to get the job done inside the car. Howard has also told me that he feels like he is a momentum driver, meaning that once he gets that confidence going in himself and the team he feels like they can click off some more wins in rapid fashion. Howard is hoping tonight’s win is a springboard to doing both.

“It don’t matter what this paid to win, it paid a lot in my mind tonight. To drive by Craig (Von Dohren) and Jeff (Strunk), who are the best in the business at this track. means a lot to me and to this team. That’s what we needed. This team needed that and of course the driver needed that. To get a win under our belt here is big. It gives us the confidence we can come back here on Saturday night and do it again.”

Thunder on the Hill Strikes:

Billy Pauch Jr’s bad luck continued at tracks besides his normal haunts. Pauch Jr was driving the Breitenstein #14 tonight and never made it through his heat race when the car started to sputter forcing him to pull off. After changing fuel pumps and other fuel related items they think they found the cause in a fuel line that was blocked. The team furiously thrashed to get the car ready for the consi but fell just short and ran out of time…

Good run for Ryan Godown in the Searock Fabrication #26 coming from a fourteenth starting spot to finish a solid fifth. A well accomplished feat considering the non-stop nature of the race…