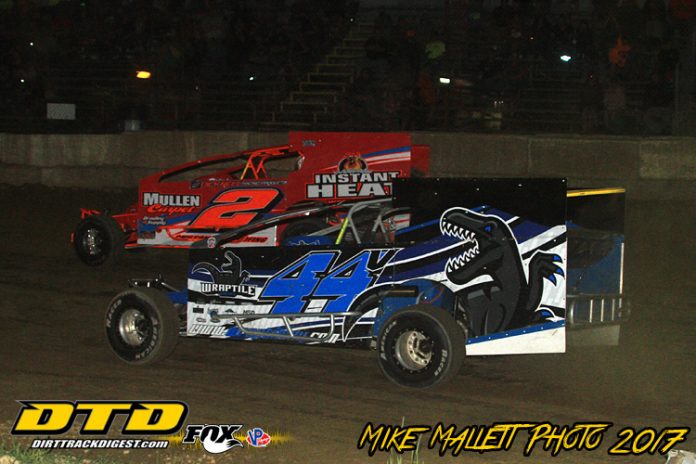 Friday night’s 30-lap Modified feature at the Freedom Motorsports Park pitted the young gun versus the veteran with the veteran just barely able to come out on top. Billy Van Pelt and Phil Vigneri III battled tooth and nail over the course of the feature.  Van Pelt was eventually able to sneak by on the outside for his first win at the facility while Vigneri settled for his best career effort in a Modfied in second.

“I earned that one,” commented Van Pelt. “This feels very good. The first night here I was passing for the lead and stupid us, we never checked the drain plugs in the side of the block and one fell out. Thank God the caution came out right then and they waved me in. We didn’t hurt anything. I come back here last week, started sixth and got second. I was all over the 88 (Pierce), but as the green flag laps went he started driving away from me. At that point I went into cruise mode. Why break it? He had me covered.  Then we had late caution.  I took a couple shots at him. We had a good time, but tonight was pretty cool”

Van Pelt, who indicated earlier in the night that he likes the bottom at Freedom with his No. 2 Bicknell, used the outside lane in turns three and four to get and keep the lead. It’s the same lane that he’s watched multi-time feature winner Shayne Pierce utilize to beat the competition. On this night he wasn’t going to allow that to happen which opened the door for Vigneri on the inside. They raced side-by-side for a number of laps before Van Pelt cleared him and snuck to the bottom of turns one and two.

“I got educated,” joked Van Pelt. “Usually when I go across the bottom it’s not quite fast enough to get around a guy on the outside. I guess I’m a little bit chicken to go out on the wall out there. The 88 (Pierce) has been doing that all year. He comes off so hard that he drives right back by me with the big-block. I thought if I just stay up there and protect that he can’t get a run on me. Then the 44 (Vigneri) popped up on me and drove right by me on the bottom. Then I really had to get up on the wheel. I finally went way out there a couple times and got a good run on him, cleared him and went right down to the bottom in turns one a two. You had to shut it right down to make sure it stayed because it was slippery in the center, but boy it came off hard on exit.”

Van Pelt faced one final challenge with two laps to go in the race as the caution came out. This put everyone on the back bumper. Van Pelt has been in that boat several times in his career, but on this night he wasn’t sure how it was all going to play.

“I was nervous,” he laughed. “I thought I was in pretty good shape but I didn’t know. I didn’t know if the 88 would be there, he runs good on the outside or if someone else might surprise me, especially when you had to slow down as much as you did on the bottom of one and two. You wonder who is doing it better than me on the outside, but we got it done.”

Close to that First Career Win

Vigneri came to within a few laps of securing his first career Modified victory. The Elba, N.Y., driver made the jump last season into the Modified ranks and continues to improve his game. He attributed some of Friday’s success to the fact that he’s been running at Merrittville Speedway on Saturday night’s against some stout competition. He continues to learn on a weekly basis as he gets more comfortable in the division.

“It’s been tough since I moved up to this class,” said Vigneri. “This is my best finish so far. It’s been a big learning curve to overcome, but the more I can get out and race the better. We’ve been running Merrittville every Saturday and that place has been an ice rink every night. The clientele is amazing. We’ve been running there and taking our lumps a little bit, but you got to get beat by the best before you can become one of them.”

That was the case on Friday as he got beat by one of the best drivers in the Northeast in Van Pelt. He took the lead from the veteran driver on the bottom of turns one and two only to watch him come back around him on the top of turns three and four with only a handful of circuits left. Once he did that, Van Pelt moved to the bottom in turns one and two to protect the lane.

“It was a lot of fun,” stated Vigneri about the race with Van Pelt. “I’ve been enjoying coming here the times we have. I just got a little loose at the end. I got the lead for a minute but Billy (Van Pelt) did a good job. It eases the pain a little bit when you get beat by someone who’s done it over and over again. We’ll just keep grinding away. Our day will come.”

Vigneri was masterful in turns one and two on the bottom with his Gavenda Engines powered Bicknell. This propelled him to the lead for parts of the race. Unfortunately turns three and four seemed to be the equalizer as he wasn’t able to come off of the fourth corner as good as he needed to. He also clipped the inside guardrail on one occasion.

“It seems like every time we come here my downfall has been corners three and four,” mentioned Vigneri. “Like I said, we’ll keep working at it and try and build off the good run. We’ll see, hopefully by the end of the year we can pick one off.”

“Third is Better than Fourth”

Those were the words uttered by third place finishing Randy Chrysler after he made a late charge to sneak by Ron Cartwright for the final podium position. Chrysler hung around the top five before finally getting things rolling in the closing portion of the event.

“Third is better than fourth,” joked Chrysler. “I always tell Rudy (Erick Rudolph) that when he doesn’t win. Or if he finishes sixth I tell him it’s better than seventh. It usually puts a smile on his face.”

Chrysler attributed his run to the front from eight to third by virtue of the fact that he found the outside. That is not a line he is normally comfortable with.

“We started getting a good run going there,” stated Chrysler.  “I found the outside. I really don’t like the outside because of my age and my weight and that concrete wall doesn’t move. I just kind of took a look at it and had a good run. That one car (Hilton) here and the 71 (Bowman) got together and I just missed that one. I lost my tempo for the last couple laps. I got ‘er back and started sailing around the outside. She stuck on there so that helped.”

Chrysler indicated that he’s been struggling a little trying to figure out Freedom. He had some help from western New York legend Charlie Rudolph to get things headed in the right direction.

“Everything worked together,” mentioned Chrysler. “We’ve been struggling here the last couple of weeks. I had no drive, no forward bite and no side bite. Charlie Rudolph gives me a few notes here and there and we came in, we did what we did. She was pretty stout.”

Mike Bowman made his first start ever Friday at Freedom. The Canadian driver made the tow in order to run his No. 71 big-block Modified. That car has seen limited action this season after a crash earlier in the year. Bowman was off in his heat finishing sixth, but figured things out in the feature to secure the fifth spot.

“We haven’t raced the big-block since we went to the BRP (The Mod Tour) race at Mercer and we left part of the car in the parking lot,” stated Bowman. “It’s good to race it, especially for the small-block program. I think getting your speed up Friday night helps.”

Bowman was pleased with the fifth after drawing the worst pill in the bucket on the night when he came through the gate.

“I’ve never laid eyes on the place until today,” cited Bowman. “We drew 35 out of 35 coming in the gate so that didn’t help either. To draw last coming in, at a new track, and to go home with top five, that is a win.”

He had managed to maneuver his way even farther toward the front but around the midway point the left side sail panel came loose and flopped over. His car also began to fade just a little near the conclusion of the event as the track lost moisture.

“We left the gear in from the heat because we knew we were going to have to pass guys and I was really timid about that cushion because it was huge,” said Bowman. “I figured we better leave the gear in it to jack rabbit out of the corners. I guess it worked. I wish that sail panel had stuck around because we were right there. We had an opportunity to get a win.”

Promoter Bob Reis indicated at the drivers meeting that there is now a change to line up format going forward for the feature. Freedom uses a draw, redraw to line up their features. If the previous week’s winner makes the redraw, that driver will automatically earn the highest redraw position…

Last week’s winner, Pierce ended up starting forth due to the change. Unfortunately Pierce’s night was done early after he hopped the cushion in turn four which caused him to smack the outside concrete…

Racing started promptly at 7:30pm on Friday night with heat races complete by 8:15. Feature action got underway after some work was done to the cushion at 8:45 with the whole show complete before 10pm.