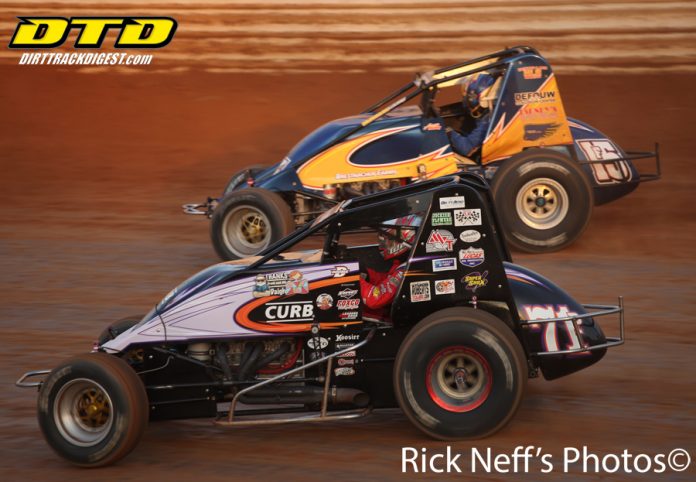 June 17, 2017 was a date circled by many on their calendars. For a sprint car faithful, everyone would have something that will get them excited.

There is a “friendly” war among sprint car fans from coast to coast. You have traditionalists, purests, gen X’s, modern, old…it goes on and on. They will basiclly yell “the other side sucks” at each other…ok, ok, I might be dramatizing here a bit. Makes for a good story… But….

Many say sprint cars belong how they started, without wings (some might say without the cages still, ok, we do need to draw a line), the days were some will say that the driver is the most important. Then you have some, the more modern if you will, that wants or says that sprint cars belong with the wings on top. The pure speed is the draw.

Arguably the winged folks are larger in numbers but the wingless folks have been gaining steam. Because of the cost to provide both on the same card, see both entities are very few and far between.

Enter June 17th and the beautiful Juniata County Fairgrounds. The Port Royal Speedway is in a emergence and gaining steam. Bigger events, site improvments on a once rustic fairgrounds oval that was threatened to close more than once is now become one of the most modern facilities on this side of the Mississippi.

The Eastern Storm for the USAC wingless sprint cars has grown tremendously over the years in both car entries and fans. USAC is also found a strong foot hold in today’s racing scene and can again go from the Atlantic to the Pacific and find success.

However, due to the fact that USAC does demand a hefty purse to keep their teams on the road, and the Central Pa. sprints also gets a solid payout, you won’t see both sharing the pit area. Again, that is until June 17.

USAC and the Posse all under one roof. It was an scheduled off weekend for ESS and this kid so the date was circled way back in the early months of ’17. It was actually circled by many. With the exception of maybe Eldora you don’t see USAC and full blown 410’s on the same card anywhere.

A big advantage to make the deal work is that Port gets to use their normal Saturday night race night, so USAC can to come to their house when the kids play once a week. Did the deal work? With the addition of all the new seating, this place now holds A LOT. And there were A LOT of folks there!

But looking at the tee shirts, you can tell there were many from each side of the battle lines. Instead of yelling the “Other side sucks”, they were all in harmony. It was one cool atmosphere. The winged folks were impressed by the skill of the wingless drivers and the wingless folks were taking in the raw speed and action that excites the Posse fans week in and week out.

USAC did 30 laps and the winged 410’s did 25 for their finales. While both cars are prepped different, driven different, each race had almost the same scenario. A total of 55 green flag, A-Main laps and each race was decided when there were just three of those circuits to go.

California’s Robert Ballou seems to like the big ovals and Port Royal is defintely that. The 2015 USAC National Champ took to the top side up near the outside wall from the start and he was just plain gone. He was defintely the class of the field and had just about a full straitaway lead.

That lead was then deminished on lap 27 for a simple spin on the back stretch. This bunched up the field of a single file restart. But, many thought this was just a formality, Ballou was that good.

Oh, the fat lady didn’t sing however and Chris Windom had a plan. When Warren Alston waived the green flag, Windom dive bombed the bottom in turn one and when the field came off turn two it was his orange #5 leading and not the white #12 that was there for 27 previous circuits. Windom pulled ahead in those final laps and all of a sudden the battle was now for second with current USAC point leader Justin Grant showing his nose.

Grant did a slider in that same turn two and Ballou made it known he didn’t take it too kindly. They swapped positions a few times until lap 29 when they both went for the bottom in turn three. Ballou had to check up which sent his car sideways into the outside wall and flipping. Talk about five minutes of fortune change…from a just about guaranteed $6,000 pay check to possibly $6,000 in damage. But as they say… That’s Racing.

Windom won, Grant second. In victory lane Windom admitted that if it wasn’t for the yellow he was running for second, it was Ballou’s race. Grant’s interview was thanking the team, sponsors and such…not much about the race. After 30 laps, there was indeed a buzz in the crowd.

Next was the winged machines for their spot on the stage. Much like the race just prior, Ryan Taylor jumped out to the lead and he too was just plain gone. As a matter of fact, with ten to go many were heading for the exits. It was early on a Saturday evening so other plans could be made.

Tough luck Blane Heimbach hasn’t made much noise as of late and he admits it. As the late laps clicked on he didn’t give up his charge to catch Taylor and the closer he got you could see the harder he charged.

With about five to go you can notice that Heimbach knew he had a chance… Three to go, two to go and a sweep to the outside of Taylor in turns one and two and his pass was made. Heimbach opened up a small distance to the checkered flag and his victory.

Two races, two outcomes that was decided on the closing stages. An exciting night. When asked if the fans wanted to see this show again, a loud roar went up. By the looks of the support, I think this is a lock!