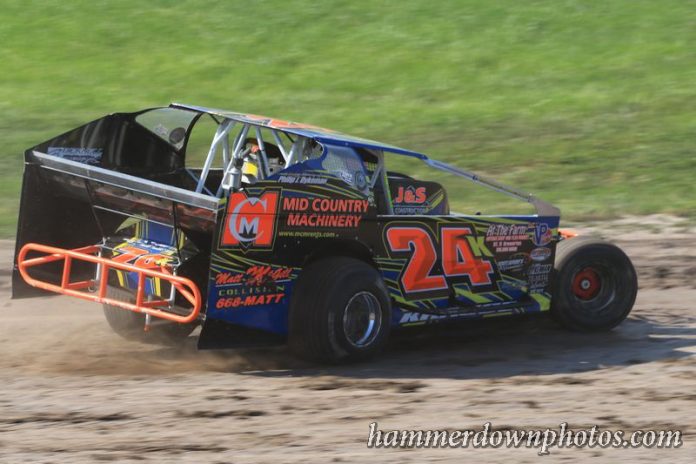 Ryan Bartlett drove from the front row to the checkered flags to earn his second career Brewerton Speedway feature win. The race went caution free the entire distance as he drove to his first win of the 2017 season. Casey Sykes was an elated young man in victory lane as he celebrated his Mod Lite win. The Ray Hedger Fabrication #13 was on a rail all night. Chris Bonofski celebrated after claiming an extra $200 bonus for his back to back 4 Cylinder Stockcar wins courtesy of Xtreme Auto Recovery. Todd Root charged to the front of the Sportsman division to enjoy the spoils of victory for the first time in his career at Brewerton.

At Fulton Speedway the story of the night was Larry Wight winning the Modified feature after starting 18th on the grid. The track was smooth and slick, making passing difficult, but Larry used the top of the high banks at Fulton to sweep by the competition to earn the top spot and the win. Glen Forward and Ron Davis III earned wins in the dual Sportsman features, while Tyler Rogers and John Strickler won the dual Novice Sportsman events. Jason Parkhurst celebrated Father’s Day early as his sons joined him in victory lane to celebrate his Late Model victory. Chris Bonoffski swept the weekend by winning the Four-Cylinder Stocks.

Sunday the King of Dirt Sportsman and Pro Stocks came out to play at Utica-Rome Speedway. The CRSA Racesaver 305 Sprints were also on hand, along with the regular class of Modifieds. Unfortunately the Pro Stock feature and Modified feature never made it to the track because of the torrential rain that swept through the area.

The 20-lap Sprint A-Main was an eventful race. The 9 car of Josh Pieniazek took early control of the race but as he began to feel the pressure from Eddie Strada Jr. a lapped car got out of shape in turn one leaving Pieniazek no where to go. The contact with the 67 sent the 9 car into a flip over the turn two banking ending his night. A few laps later Jeff Strombly, a former Modified campaigner, took over the lead and used his dry slick experience to win his first 305 Sprint Car A-Main At the Action Track of the East.

The Flying Squirrel (Rocky Warner) worked his way to the front and set his cruise control to win the 30 lap King of Dirt Sportsman main. Several cautions for spinning cars and one red flag situation caused by a multi car pileup in turn four kept the field bunched up but Warner was able to retain the lead unchallenged. It was immediately at the close of the Sportsman victory lane festivities that the rain came, and it came with authority.

I want to thank Bill and Kim Shea for allowing my son to join me for Father’s Day. He’s a faithful servant of the Lord and a knowledgeable student of His Word, so having him along helps to cover ground for the work of the ministry. He and I were grateful for the opportunity to serve together for the afternoon.

One team has struggled to find a sweet spot with a new chassis. After digging deep they discovered a mechanical problem in the brake portioning valve, and their efforts have done a 180 since. The family owned 24k of Nick Krause is starting to assert themselves as they can now dial the new car in. Two second place finishes at Brewerton and Fulton and a fourth in The KOD event at Utica Rome Speedway Sunday give me the impression that it won’t be long before we see the blue and orange 24k in victory lane somewhere in our neck of the woods. Watching them over the past month has revealed a passion and persistence in their pursuit to perpetuate stronger results. As you can see, those attributes have paid off.

Those attributes also remind me of the pathway to a blessed life through a deeper relationship with God. He’s not a distant approachable entity some would perceive Him to be. He’s the Father of creation, and longs to be a Dad to all humanity. When the Old Testament scribes penned the words “fear the LORD” they weren’t telling us to be afraid of Him. They were telling us to fear anything within ourselves that could cause us to break fellowship with Him.

When they wrote that He is a jealous God they weren’t saying he’s angry if we have other relationships. He created and perpetuates His Kingdom through relationships. He was saying through the scriptures that He is deeply impassioned toward us. The means He desires nothing but good for us so deeply that He will go to any lengths to bless us in spite of ourselves. The Pentateuch (Books of Moses) often use the phrase to describe his offence at the false gods that drew His people away from Him.

“you shall not bow down to them nor serve them. For I, the Lord your God, am a jealous God, visiting the iniquity of the fathers upon the children to the third and fourth generations of those who hate Me, but showing mercy to thousands, to those who love Me and keep My commandments.
Deuteronomy 5:9‭-‬10 NKJV”

His affection runs so deep that He will allow those that reject him to deal with the consequences of their actions for generations in the hopes they will turn back to Him. It was never His intent that we would use our free will to reject Him, but His mercy is always available when we’re ready to turn around and pursue Him with the same passion and persistence He pursues us with. When we get to that place in our life He gives an awesome promise.

“In those days when you pray, I will listen. If you look for me wholeheartedly, you will find me. I will be found by you,” says the Lord . “I will end your captivity and restore your fortunes.”
Jeremiah 29:12‭-‬14a NLT”

When Paul wrote his epistle to the Hebrew believers he reiterated this promise in his teaching about faith. As he decribed faith in Chapter 11 of Hebrews he said:

“But without faith it is impossible to [walk with God and] please Him, for whoever comes [near] to God must [necessarily] believe that God exists and that He rewards those who [earnestly and diligently] seek Him. HEBREWS 11:6 AMP”

Several things are revealed here. First, we can get close to God. We can be in His presence because Jesus Christ opened that door for us by His finished works. We only have to believe, first in what Christ accomplished for us, then with complete trust in God to provide for and bless us. Through our relationship with Him and his Church we can develop the faith we need to receive everything He promises us. We can grow to a place of spiritual maturity that emulates the Lord’s character and life. Notice that Paul said we have to earnestly (or eagerly) and diligently (or passionately) pursue Father to receive the benefits of the relationship.

He left us with the responsibility to search Him out, to nuture our individual relationship with Him, and to understand the amazing things God has planned for us. The family I mentioned above searched persistently to find what they were looking for, and their efforts have been completely different than before. God will give your life the same experience when you search for Him until your life does a 180 toward the direction He always saw it going.

We’re always available if you want to go in that direction. We can help you find your place in the Kingdom of God so you can run the race of life with success. He’s a rewarder of those who diligently seek Him. If your pursuit is persistently passionate about knowing Him, you’ll discover blessings and favor that will blow your mind.

We can be reached at Finish Line Chaplain on Facebook, or at flchaplain@windstream.net through email.