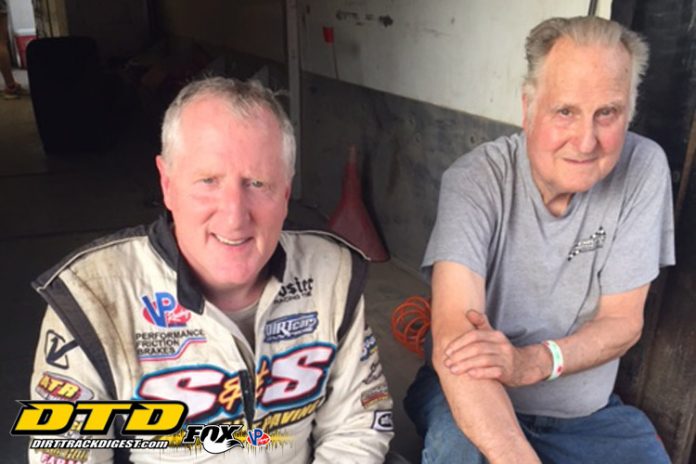 On Wednesday evening we were back at the Great Race Place for a regular show, to make up for early season rainouts.  By the look of the parking lot it was a great idea as many regular and some visiting fans made the midweek trip to the Malta oval.  With it being a point show all the regulars were there along with some who stopped in to get track time for Brett Hearn’s Big Show 9 on June 27th.

The Modified field was 32 cars strong including visitors Bobby Varin in the Palmer No. 76, Josh Hohenforst in his No. 6H and Danny Varin filling the seat of the No. 816 of Jeff Rockefeller who was unable to make the show.  We asked Bobby Varin how his season was going and he said he still can’t believe the great ride he has with Alton and Carole Palmer.  Bobby took his pole starting position on Wednesday and ran off to win the first Modified heat.  Watching him run only made us wish that Palmer’s would run at Albany Saratoga weekly; it would be another great competitor in the Modified field. The few past few weeks we have been talking with the driver of the No. 10, Don Mattison.  Don has been racing for over 20 years and enjoys each week he is able to run his $6000 motor with the big money teams.  Don has won at both Utica Rome and Devil’s Bowl.  He remembers one trip he took to Fonda back in 2006 for the season ending big show and for Don it was a near career ending race.  Don crashed and broke three vertebrae in his back and sustained a head injury that gave him headaches for years after.  He said he knew by 2007 that he would someday return to racing, just to prove to himself that he could.  On Wednesday his wife Lisa was with him in the pit area and by the excitement in her voice you knew she was enjoying the whole experience. We also stopped by to talk with Keith Flach about his season so far.  One change we noticed in his pit this season was tire master, Jay Castimore, former Brett Hearn crew member for many years.  Keith says Jay is with them whenever he can be and also sets up what they need if he can not be at the track with the team.  This is Keith’s third year on the DIRTcar Big Block Modified Series and he says he still enjoys running with all the talented drivers that follow the tour.  He said all the events seem to be helping him at his home track, Lebanon Valley.  Last Sunday the DIRTcar Series pulled into Five Mile Point and Keith came away with a fifth place finish.  Last season at Lebanon Valley Keith had one win and 12 top five’s.  This year he already has four top five’s.

Lebanon Valley on Saturday and once again the pits were full and it was an exciting night on the high banks.  Brett Hearn picked up the win in the Modified event, his 898th career win and his 100th at Lebanon Valley.  A bit of trivia from announcer John Stanley, the 100th win for Kenny Tremont at Lebanon came on the same night, 15 years ago. The heart and soul of local racing is the support classes at each track each week.  The Pure Stocks, Street Stocks, or Four Cylinders are just a few of these special classes that invite the novice to try their hand at this exciting sport.  Many times it’s a family affair, father and sons, fathers and daughters or on occasion it’s mother’s and daughters both coming to the track on a weekly basis to race for the evening……after spending countless hours during the week in the shop working on the car.  This is the typical family that races each week at area speedways all over the country.  Saturday at Lebanon Valley we met just such a family, the Denue family from Averill Park, father, John (a former race), and Dom who at 14 years old races in the Pure Stock division at The Valley.  We missed meeting Dom’s younger brother, Evan, he had already competed in one of the first Pure Stock events and was headed for the stands.  Dom is in his second year of racing his No. 145 Pure Stock and is a Freshman, moving up to his Sophomore year in September.  John says he quit racing to let his boys race mostly to keep them busy and out of trouble.

Maybe it’s our age or we just have more time to think and recently we thought about a famous comedian, Rodney Dangerfield who’s catch phrase was “I don’t get no respect”.   How does respect relate to our sport?  On Saturday we spoke with Kenny Tremont and his father Ken, Sr. who has been at Lebanon Valley with a car since 1959.  Ken, Jr. began his career there and has the honor of being the most winning driver at The Valley in the Modified division.  Kenny Tremont has earned the respect of his fellow drivers wherever he goes but the question today is; are the veteran drivers of our sport, like Tremont, getting the respect of the up and coming drivers who race alongside them?  In the case of the Tremont’s they have earned the right and have given much of their life to the sport of auto racing.  This is the case for many of the veteran drivers that are out there today and maybe the young guns coming into our sport to challenge need a lesson in respect.

New management at Glen Ridge held a warm up session on Sunday evening and next Sunday will be the first official event under the new team of Parillo and Sefrin.  Everything was conducted under a very friendly atmosphere and six divisions were represented, 602 Crate Modifieds, IMCA Modified, Pro Stocks, Slingshots and Four Cylinder.  To thank them for their support the 602 Crates were given an opportunity to get a spot in next weeks feature through time trials with the fastest being Tim Hartman, Jr. who then drew third spot in the draw.  We wish both Mike and Ray the very best in their endeavor.