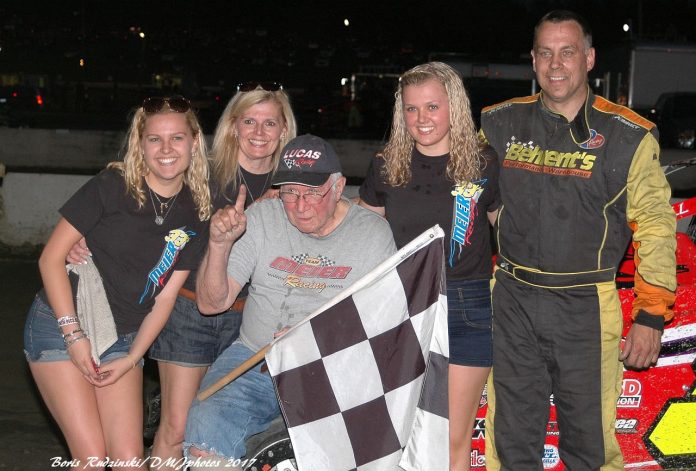 MIDDLETOWN, NY – This past weekend was Fathers Day weekend again and as we celebrate dad lets take a short look at what it means for some of the Wiley modified veterans who now have kids of their own racing.

The overriding theme amongst the drivers interviewed is the ability to bond with their kids in ways that bring them closer. Yes they still quibble with each other because its still Dad and Sons but the relationships that they build during the week in the shop and at the track are life long.

Chuck McKee – “Its the opportunity to bond with Tyler. I don[t worry so much about him going out on the track its the time in the shop and at the track that I value so much. I’m able to look at things in a different light now that I am retired and able to step back and see things I may have missed before”.

Tommy Meier – Meier has a few more reasons than most to like Fathers Day. No its not for ties or for a new set of ratchets he can use during the week when he’s turning wrenches for a living, Meier won his first big-block feature on Fathers Day weekend. This year he also won the 358 feature and a guaranteed 7th starting spot for the Eastern States 100. Meier is joined nearly weekly by his wife Mary and daughters Breanne, and Shannon. Also, Tommy’s dad joins him weekly making it a real family event weekly.


Chris Schultz – When not piloting the family owned 24 big-block at Orange County, you will see Chris helping his son Matt with his sportsman entry. Matt recently won his first sportsman race at Orange County. Matt is a high school student who also races weekly at Accord Speedway on Friday nights.

Other drivers interviewed but due to space and time constraints were Mark Connolly and his daughter, and recently in a separate story Richie Eurich mentioned all the things that have happened in his 50 years of racing and some of the events in life he has missed due to his commitment to being at “The House of Power” on Saturday nights.