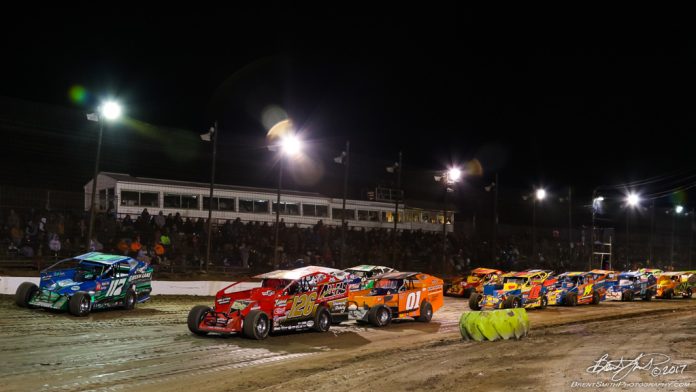 Not much going on this weekend on the NJ/PA modified circuit. The Modifieds were off this weekend at both the Big Diamond and Bridgeport Speedways. An early afternoon thunderstorm forced New Egypt Speedway to throw in the towel and cancel. The Modifieds were only able to run this past Saturday at the Grandview Speedway where young Brett Kressley was finally able to shake off all of their teams bad luck and motor issues to record a big win for himself and for his team.

Big Diamond Speedway 6/16/17 – The mighty 358-Modifieds were given the night off this past Friday night with the Sportsman cars being the headline division for the evening. Big Dave Dissinger was the winner of the sportsman feature. For Dissinger who owns the #88X modified that Craig Von Dohren runs on Friday night’s it was a well-deserved and popular win.

The 358-Modifieds return to action this Friday night 6/23 along with the mighty winged cars of the URC Sprints. Should be a great night up in “God’s Country” for some racing.

Grandview Speedway 6/17/17 – Coming off a very good rookie season where he won multiple races and three different tracks, young Brett Kressley was looking to avoid the dreaded sophomore slump in his second year. Although the driver out of Orefield, Pa., has been fast pretty much each and every race this season the team has suffered a multitude of mechanical gremlins and engine failures that have turned good finishes into DNF’s.

Even with all the bad luck and problems the young Kressley has encountered he has kept a smile on his face knowing that something had to turn around soon and their team would start getting what all of their hard work deserved.

After a great fourth place run in the STSS race this past Thursday, Kressley was getting his confidence back and on Saturday all their hard work was rewarded when Brett “The Threat” Kressley raced under starter Ray Kemp’s checkered flag to win his first race of the season. It was the second career win for Kressley at the speedway.

Kressley wasted no time in grabbing the lead from early race leader Bobby Gunther-Walsh on lap three and was never seriously challenged the rest of way. After a lap 10 restart Mike Gular grabbed the second spot and tried to put some pressure on Kressley but to no avail as Kressley was able to work by lapped traffic to put some distance between himself and the pack. Duane Howard was able to get past Gular late in the race and was rapidly closing the gap between himself and Kressley, but the laps ran out before Howard could make a run at the lead.

Kressley took the well-earned win over Howard, Gular, Kenny Gilmore and Jeff Strunk.
With Strunk’s fifth place finish combined with Craig Von Dohren’s ninth place finish we have a new point leader as Jeff Strunk has now taken over the reins atop the standings. Howard remains third with Gular and Doug Manmiller rounding out the top five.

New Egypt Speedway 6/17/17 – Once again Mother Nature made her mark on the New Egypt when a late afternoon thunderstorm dropped several inches of rain on the speedway forcing them once again to cancel.

The 358-Modifieds will not be action this coming Saturday June 24th so they can prepare for next Tuesday’s June 27th “Garden State Gunfight” paying a whopping $6000 to win and $400 just to start the 60-lap feature event. There should be plenty of invaders on hand to take on the New Egypt regulars and try and steal the big money. A race I am really looking forward to for sure.

Bridgeport Speedway 6/17/17 – The South Jersey oval held their annual “Pack the Track” night offering free admission for everyone on the night. The track had a great crowd on hand but unfortunately the rains came forcing them to postpone the nights show after all the qualifying had been completed.

The track is back in action this Saturday June 24th with their regular lineup of Big Block Modified, Crate Sportsman and Outlaw Stocks.

NJ/PA Mod News N Notes:
Not much in the way for the News N Notes section of this week’s story with the Modifieds either off or being rained out…

In two weeks on Tuesday July 4th, the place to be will be the Grandview Speedway as Bob Miller presents his ever popular “Thunder on the Hill” series. This show will consist of the winged 410 Sprint Cars along with the 358 Modifieds. The 410’s will run as part of the “PA Speedweek”. If this show isn’t popular enough on its own, as an added bonus NASCAR Monster Energy Cup drivers Kyle Larson and Kasey Kahne are scheduled as of now to compete in the sprint car portion of the night.

DRIVER OF THE WEEK: Overcoming a season long streak of bad luck to win his first feature of the season. This week’s driver of the week is none other than Brett Kressley! Congratulation to Brett and his team on their hard earned victory.