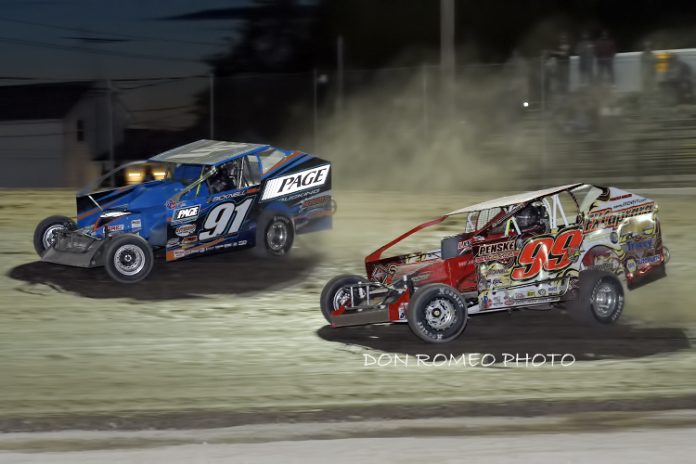 The Ultimate Outlaw 100 at Outlaw Speedway provided an interesting podium interview with the top three finishers.

Billy Decker captured his second Super DIRTcar Series race of the year while second place Matt Sheppard was more than a bit frustrated and third place Larry Wight wasn’t happy or upset over his finish.

Decker used a 68th lap restart to take the lead from Wight and in the final 15 laps watched time and time again as Sheppard would pull to within striking distance of capturing the win on his Friday night home track.

The winner in the Page Trucking 91 was matter of fact in victory lane.

He said, “The car was a rocket tonight. In fact the car has been good all year long, but we beat ourselves at Bridgeport and at Five Mile we just didn’t make the adjustments.”

On the point where he took the lead he lined up on the outside of Wight and noted, “I figured Larry would get a good start and timed it just right.”

Reflecting on the race he noted, “We were really good in three and four. When we were in lapped traffic I got to thinking the top would slow down, but I hit the bottom and along with lapped traffic it worked for us.”

Runner-up Sheppard climbed from his car and emotion was evident.

On the 41st lap restart he appeared to make contact with Wight as the duo were first and second. The 9s did a complete 360 in the backstretch, he kept his foot in hit and was shuffled back to fifth.

Of the incident, Sheppard said, “Larry lost it and drove over my front nose. He was driving over his head. ”

Matt recovered and noted, “The track never slowed down tonight.”

In the closing stages there were numerous times the 9s was under Decker, but Matt said, “Each time I thought I could get a pass there were lapped cars.”

He felt good about his ride as he noted, “I really think we had the race car to win, but luck didn’t go our way tonight. However, doing a 360 spin and to keep it going eventually getting second is okay.”

For Wight the podium finish was satisfying.

On the restart that Decker took the lead on Larry said, “I thought maybe I could get more bite coming out of the fourth turn and really hoped to have a good run there.”

He noted the track took rubber in spot and credited the track crew. Early in the night there was a huge hole in the third turn.

Wight said, “They did a really good job smoothing out the track and it felt good out there. They got rid of the hole in turn three and that helped the racing.”

Looking at his tires after exiting the car for the post race ceremony he said, “It was a good run tonight, but we just have to work harder.”