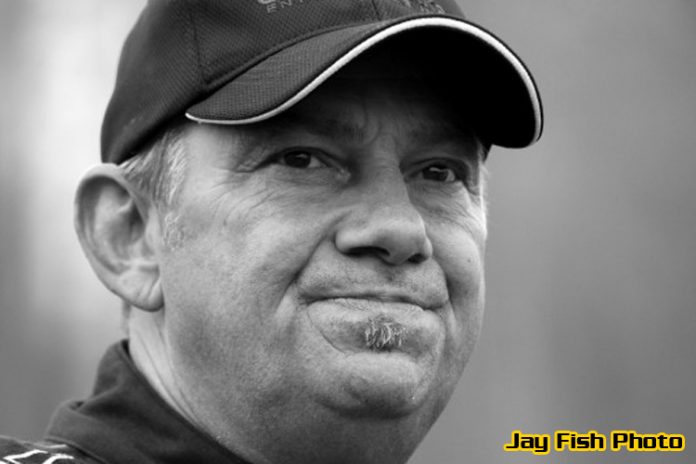 “Brett Hearn’s Big Show 9” lights them up on Tuesday, June 27 and the title of this event simply isn’t someone using the legendary drivers’ name to promote a major event.

Standing outside of his hauler at the Outlaw Speedway on Tuesday night Hearn got off his phone long enough for an exclusive interview with Dirt Track Digest.

When asked about the event using his name he said, “I put the whole thing together, sponsors, decision making and whatever else. Lyle (DeVore) does his thing and I do mine, but it’s important to me that this is a major event.”

Continuing he talked about how he got into the promoting aspect of the sport. Brett noted, “I have been so many places that I’ve seen some good ideas all over. Some track owners really never get around that much and sort of get locked down doing what they are doing. I’ve seen the good, bad and ugly. I figured I had something to offer and have some notoriety with people in the sport that I could do something special. I thought it would be fun, but I really wanted to do something and make it good.”

Hearn explained further, “I really wanted to have a show that would be remembered. It needed a name so we could build upon it so ‘The Big Show’ was it. You have to have a name that people will remember and I wanted to have it in a good facility and Albany-Saratoga fit that perfectly as it has a good reputation.”

He noted that working with Lyle DeVore, “It all works out as we have been able to keep the promoter and driver aspects of it separate and that is important.”

In the past he tried to bring Kenny Wallace to the event and said, “Kenny has a busy schedule and we got rained out. It is just difficult. However, this year we were able to get Timmy McCreadie to come off the road to be with us.”

Brett Hearn probably never really envisioned the way his racing career has gone, but as he flirts with 900 wins he definitely is one of the all-time greats.

Ironically, Hearn wasn’t even thinking that dirt racing would be his destination.

Looking back he explained, “In 1975 I was trying to find a way to race for a living, but as it turned out it wasn’t the way I had planned on doing it. I had raced go karts on road courses and through friends I met Rob Dyson of Porsche and he helped me get into the Skip Barber Driving School. I thought maybe I could find a way to make a living doing sports car racing.”

Reflecting on his start he said, “I was 21 in 1979 and owned my own Big Block Modified and won Eastern States. I was working in a race shop owned by Pete VanIderstine. My dad had given me my first ride and I drove for him at Nazareth and for Pete at Middletown and things just worked.”

Hearn was probably one of the first dirt Modified drivers to procure a major national sponsor.

He said, “Pete owned quite a few speed shops and warehouses and he really influenced me in regards to teaching me business and other aspects of the sport. In the winter of 83-84 I had a connection with Pepsi and that connection turned out to be with a decision maker in regards to sponsorships and advertising. I remember flying into Syracuse for the meeting, getting off the airplane with the temperature three degrees below zero and having my pictures and plans. We drove to the meeting and they came on board.”

It was also in the 80’s that he made a major move as he explained, “There was this guy up in New York by the name of Glenn Donnelly and I saw he had a series where guys were racing a lot and maybe I could make a living racing there. My goal had always been to race for a living.”

His career continued to excel and in the summer of 2017 the number 900 is looming.

However, wins have come and have kept coming over the years.

He said, “I remember winning the 500th at Volusia and thought wow this is unbelievable. Now I’m looking at 900.”

The 58-year-old driver still appears to have plenty in the tank to keep moving forward, but memories of his success will linger for decades to come.

Looking back at his career and what he considers his biggest three wins he stopped, took a deep breath and let his mind wander a bit. However, he said, “Obviously, the 1979 Eastern States in my own car is one of them. The first win at the Syracuse Mile and the third would be the first time at Eldora when we changed a tire on lap 40 and came back to win. After the race Earl Baltes came up to me and said it was such a crazy race, but it was one of the best races he had seen. That really meant something to me.”

The season continues as he will be going from driver to promoter and back to driver. Brett is quick to give credit to those that surround him.

He said, “Steve Beckwith is my crew chief and he had gone with Ganassi, but is back. Bounce Frei is our truck driver and I couldn’t keep doing this without Joe and Joe (father and son) Arcerari and Dick Hicks as well as my father.”

Brett Hearn has left an impression on competitors, track owners, sponsors and fans.

In fact as the interview wound down an older gentleman who was a veteran race fan stopped by, shook Brett’s hand and said, “I have followed you for years and you are the classiest, most respectful driver I’ve seen. You represent yourself and the sport so well. There will never be another one like you.”

Brett Hearn smiled, said “Thank you” and went back to work.

And in the effort to continue as a promoter he stepped out of the driver role after the driver’s meeting and slipped on his other hat.

He told the gathered drivers about the purse and his excitement was evident as he said, “We have this DJ who says it will be as loud as Yankee Stadium and so guys give me a song to introduce you to or I will pick one.” With a smile he noted, “If I pick one you might not like it.”

Also in keeping his promoters hat on he noted, “Driver’s autograph session with the fans at 5 p.m.”

He then headed to the trailer for another night of Super DIRTcar Series racing action.