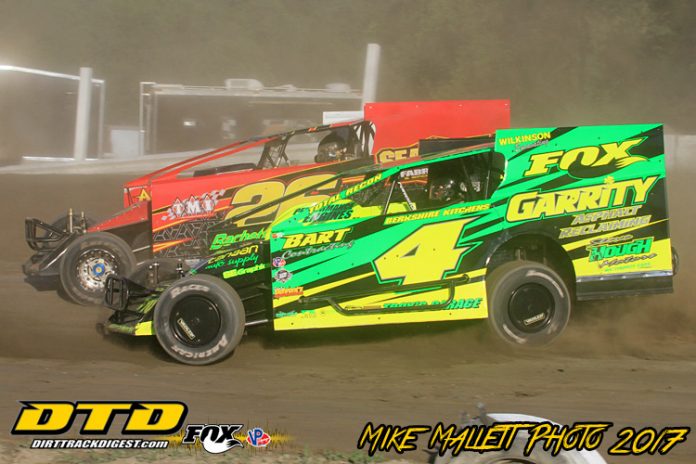 Dominant isn’t a strong enough word to describe how good Andy Bachetti has been at the Afton Motorsports Park in 2017. The defending track champion has captured five feature wins in seven attempts. That’s pretty good.

Unfortunately, Wednesday in the Afton Action 50 it wasn’t his night. The Sheffield, Mass., driver was just plain off. He wasn’t a threat all night long as he failed to qualify from his heat, missed qualifying in the consolation before using a provisional to start the feature. He crossed the line sixth at the checkered flag.

“The car just wasn’t right,” said Bachetti afterwards. “The car was really, really off and we haven’t been off here all year. We salvaged a good run out of it. That’s all you can do.”

Throughout the 50 lapper, Bachetti tried just about every lane on the race track. None of them helped as he just struggled to roll up through the field like he’s been able to do on a Friday night. Even afterwards he was still scratching his head about the issue.

“I don’t know if it was from last week when we got up over a guy’s tire, maybe a torsion bar or something else,” he said. “We just weren’t good on the bottom, middle or top. I just settled in and eased up through there. We stayed out of trouble.”

Godown Gets it Done

Prior to the start of the feature, Ryan Godown wasn’t very happy with how his night was going. Godown, who’s won at Afton in the past, had a tough heat race and was unable to qualify. He won the consolation which put him 17th in the starting order. That was no problem at all as he battled his way up to second at the end.

Godown was charging late but several cautions in final third of the event may have been his downfall. He elected to go with a harder compound American Racer. It was good on the long run but not every good for the short sprints.

“Right at the end we had too many cautions,” cited Godown. “The tires cooled down and I couldn’t get enough heat back in them. What are you going to do? Second to (Stewart) Friesen is a good run. Coming from that far back I didn’t think we could get second. I was hoping for a top five. I can’t thank Steve and Diane Searock enough for this whole deal. We keep getting stronger.”

Jeremy Smith is a former Afton Motorsports Park Modified champion, but since his return to racing last year the track has not been his friend. He’s struggled nearly every time he’s been to the fairground facility. Wednesday night something finally clicked as Smith held on after starting on the pole to finish third.

“I’m real happy with third place,” mentioned Smith. “I haven’t gone that well since I get back into racing here at Afton. So to come home third, I know we started up front, but to maintain it on a track that is pretty slippery. We’ll take it.”

“Last weekend it was pretty slippery at Brewerton and it helped,” stated Smith. “I think I had too much stagger. I couldn’t roll the middle like them guys so I just stayed on the bottom.”

Creeden Can’t By a Break

It’s been a tough year for Wurtsboro, N.Y., driver Danny Creeden. Creeden has had no luck on the Short Track Super Series. He broke a hub at the Orange County Fair Speedway in the opener and got a flat while leading at Thunder Mountain Speedway. Needless to say it’s been a struggle. Wednesday night he had the dominant car for the first 35 laps of the feature. Then the caution came and changed everything. A pair of restarts saw some contact between him and Friesen.  Friesen was able to wrestle the lead away from him. Then on the next restart, Creeden spun the tires.  He fell all the way back to fourth. There was definitely some disappointment for Creeden afterwards.

“Those last two restarts killed me,” stated Creeden. “I was still second to him (Friesen) on a later restart and I got out in the middle of the track and spun the tires. Three bad restarts cost me a race, but we’re happy that we finally got a good top four run. Hopefully the monkey’s off our back. We had a great car, just a few bad restarts.”

Creeden was able to move all around the surface on Wednesday. He got the lead through the middle before planting himself on the bottom of the race track. Had the caution not come out, things would have turned out differently.

“I could roll the top and the middle,” stated Creeden. “Usually I can’t roll the middle but I got by Nick (Nye), he was on the bottom and I rolled the middle. I rolled Tommy (Meier) on the outside. I didn’t want to see a yellow.”

In the end Creeden was still happy with the run considering he got by some really good cars.

“We showed up here last Friday and were real good,” he said.  “We were still good today. Hell, Stew’s the best of the best. Ryan Godown comes up here and goes good every time. Jeremy Smith was good tonight. I’ll say it again, we just didn’t need those damn restarts.”

Matt Sheppard was running in the top ten in the feature when he was involved in a late caution with his Vic Coffey owned No. 92s. He and Mitch Gibbs came together and stopped at the top of turn one. He failed to recover from the incident…

Nye had a solid run go out the window on a late restart. He got shuffled back a couple of spots from third before someone drove over the frontend of his No. 6nn. As a result, the steering went bad forcing him to call it a night…