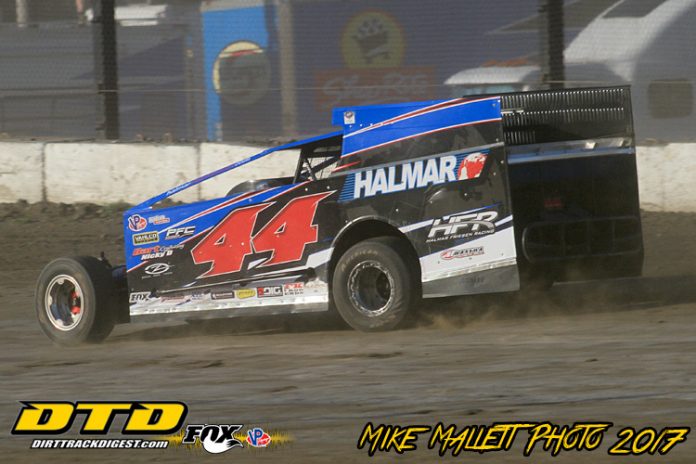 Tuesday night didn’t go as planned for Sprakers, N.Y., driver Stewart Friesen. Friesen was running inside the top five in the Ultimate Outlaw 100 when contact with a slower car caused him to spin. From there he was mired in the back and never able to recover.

Friesen’s luck seemed to turn on Wednesday night at the Afton Motorsports Park. Friesen raced to a redraw position in his heat race from the back.  Things were looking up right before he ended up getting the worst possible starting position of the bunch as he drew the 12. This put him behind several top contenders for the win in front of him to start the 50-lap affair.

Undeterred, Friesen did what he’s been able to do on so many occasions after starting deeper in the field. He drove to the front where he eventually passed Danny Creeden for the lead.  He then all off all challenges in the final 15 circuits to pocket the $5,000 payday.

“I’m lucky enough to have a great race team and a great car owner like Chris Larsen at Halmar that lets us race all the time,” commented Friesen. “You can shake off bad nights because you are going racing the next night. We’ve been close the last couple of weeks or so. This is a good one. Whenever you redraw bad you got do some racing. The track was awesome. The outside came in. It was super wide. It was a lot of fun. I’m glad to get one.”

Early in the night the bottom was the preferred lane around the tricky track. In the heats everyone lined up and tucked down as low to the marker tires as they could. Friesen made a couple passes on the outside to finish second from seventh. In the feature the guys in front of him did more of the same opening the top lane for Friesen. He migrated all the way up to the outside wall. That proved to be the difference maker.

“Those guys got line up on the bottom and there was some good moisture up there on the top,” mentioned Friesen. “You had to commit to it and go way up there to get to it. After a couple of laps it cleaned off and we got rolling. We started picking those guys off.”

The top lane got Friesen into the top five early on then he patiently picked of cars one at time. By the time he got to second, Danny Creeden has amassed about a half-straightaway lead. The two seemed to even out as Friesen was never able to really close the gap. Then the race changed as a pair of cautions bunched the field up on lap 35. On the first restart Creeden pulled away, on the second it was Friesen getting the better of him to take the lead.

“It’s always elbows up when racing with Danny (Creeden),” stated Friesen. “It was good. We rubbed a little bit on the first restart. He got a pretty good jump on me. I said, ‘Alright, I got to try to stay with him.’ I was able to stay on his rear quarter enough to get the run through one and two and sneak around the top to take the lead down the backstretch.”

Friesen stayed on the top of the race track until the final few laps when he migrated down to the bottom all the way around the speedway. It was the right call as no one had anything for him as he drove away for the win.

“I knew the top was gone in three and four,” Friesen said. “We got the lead on the top and I probably could have stayed out there, but I wasn’t sure. It felt really good down on the bottom of turns one and two. I just tried to keep it straight and it worked out.”

Friesen hopes this win turns things in the right direction. The team hasn’t been bad, but they’ve watched a couple of races slip away from them and the bad luck bug has been biting them.

“We’ve been close,” commented Friesen. “We led a couple races last week. Then we had a bad race at Five Mile, probably our own doing on a bad tire selection. We were up toward the front last night and that happened. It’s good to have some luck and get rolling a little bit. We got a lot of races coming up.”