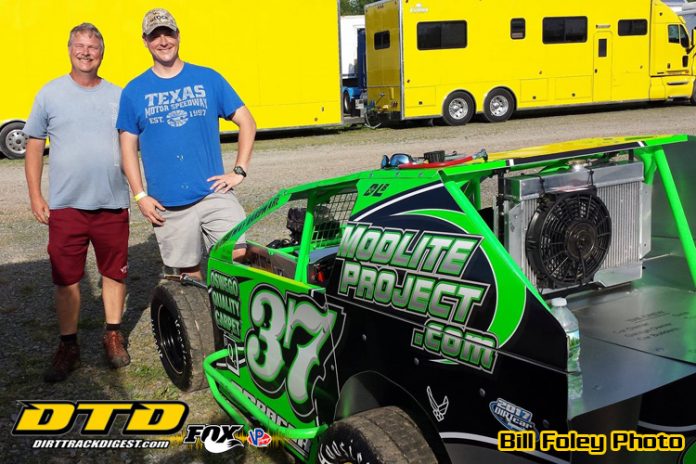 When the new season started at the Brewerton Speedway there was a green and white number 37 Mod-Lite being unloaded in the pits for the first time.

No one had ever seen the car or the driver in the pits before, but the story behind the team was more than a little different.

Father and son, Tom Perkins Sr. and Jr. had worked together all winter long putting together a dream.

Then, two weeks ago the car got upside down during the Mod-Lite feature at the Demon and you had to wonder if this new team would return any time soon.

Well, this past Friday night they were back and ready to go.

This is a story that needs to start at the beginning.

Tom Perkins Jr. said, “I had been sitting up there in those grandstands for a long, long time and I wanted to be out there on the race track.”

The U.S. Air Force Intelligence Officer wanted to do things a bit different and said, “We wanted to build our own car. We didn’t want to buy one.”

So with that dream came the creation of modliteproject.com where fans can see what the team did from day one, learn more about the intricacies of a Mod-Lite and even watch videos of how it was done.

The reason the team wanted to start from the beginning and do it themselves was evident after the crash.

Tom said, “In building it ourselves we want to know how to fix it. I touched every nut and bolt and from that was able to reference how to try to fix it. He lost two injectors, the air intake and throttle sensors and other parts. We learned a lot about the motor.”

Continuing he said, “Knowing every inch of your car definitely helps you to fix it.”

These guys didn’t have a ton of racing experience, but researched how to do it (as evidenced by the links on their web site).

Tom Jr. is quick to credit those who have helped him go from baby steps of building this Mod-Lite to the end product.

He said, “Mike Mullen and his team along with Casey Sykes team have helped. I really like this division. Everyone helps everyone else and it is amazing what it is like. For me this is a dream as I have gone from the grandstand to doing something that I always dreamed of.”

His idea of sharing his exploits is a little different. Many drivers have go pro cameras in the cockpits and fans can view what it is like behind the wheel, but few have gone as in depth at modliteproject.com which is updated regularly.

In fact, Tom said, “Hopefully very soon we can get the video up on our engine repair from that flip.”

Now this guy is really trying to give the fans an idea of what it is like behind the scene. As he notes on his web site, “This project and team is a real time work in progress, so be sure to check back often for new content and resources as it is developed.”