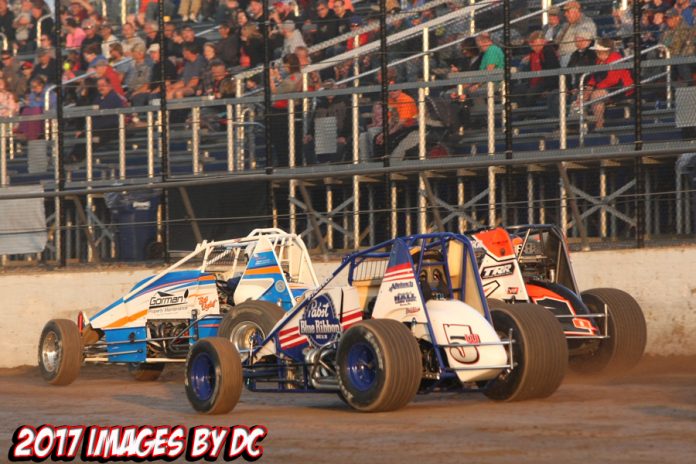 The weekend was eventful for me but not in the usual ways. The winners Friday at Brewerton Speedway were the raindrops that eventually came with a vengeful rage to saturate the grounds causing them to cancel the show. Saturday the winners were all of the graduating seniors from the class of 2017. Congratulations to every one of you for this milestone in your life. The best is yet to come as you move forward into whatever field of further education or vocation you choose. Stay actively engaged toward your vision. It will surely come to pass as long as you don’t lose hope.

Sunday I was facing indecision as rains threatened both Utica-Rome and Weedsport. I’ve never seen a wingless Sprint Car show, so when late afternoon rains forced the cancellation of the program at Utica-Rome I had my chauffeur (son) point the car west on the Thruway. Even though a short drizzle delayed the show, we were not disappointed. A full field of Wingless 360 Sprints showed up to do battle for the coveted $5000.00 winners share of the purse in the Ultimate Wingless Shootout.

This show was intended to draw teams from both the ESS and URC tours, but a few 305 Sprint regulars, a few Patriot regulars, as well as some teams that only run wingless events came out to compete against each other. In addition, a large field of Sportsman were on hand that required two consolation races to set the field for their 25 lap feature.

You could call it a night of firsts. It was the first time a wingless Sprint Car event of this magnitude has been attempted in central New York. In the midst of the event there were several unexpected “firsts” as well.

In hot laps as a new 305 driver was entering turn one he hooked the berm with his right rear and flipped up and over the Jersey barrier right out of the park. Cartier’s car came to rest up in a tree. I don’t think anyone in our neck of the woods has seen anything quite like that before. I was in the pits when it happened, but I heard from more than one reliable source that chainsaws were used to free the badly damaged car from its perch, and fortunately the driver wasn’t hurt in his self professed season ending crash.

Another first for me since leaving the novice ranks of quarter midget racing was seeing a driver turn into the side of another driver during the formation of the line up before the first green was waved. I thought that drivers were supposed to give each other room when lining up under yellow, but to see a car flip onto its side under yellow because someone drove into the side of them was definitely a first for me. Both were able to restart in their original spots, but I’m quite sure the victim was a lot warmer under the helmet based on his reaction after the incident.

The final “first” in my experience was seeing almost every driver that regularly runs wingless events finding themselves experiencing night ending flips while racing against winged sprint specialists, in a wingless event. I’m really not sure how to process that. Coleman Gulick was one of the few (former USAC wingless competitor) who ran the entire distance.

Larry Wight powered around the top to take the early lead as the race got underway. Several attempts to complete lap four after the first flip occurs in turn two created several other incidents that thinned the field. Once the remaining field got underway the race was pretty intense. Larry Wight was the man to beat until he slammed the turn one berm with his right rear, sending him bicycling up the banking. Minor contact with the Jersey barrier after the car settled down helped Mark Smith and Coleman Gulick slide by Wight.

Wight and Gulick put on quite a show for the second spot for several laps as Smith opened up the gap between him and the battle for second place. Wight regained the second spot as the laps wound down while Gulick finished a solid third.

The Sportsman race was almost over by the time I was able to get out of the pits to see the last ten laps. Kevin Ridley won the green to checkered event. For more details on the Sportsman event look for the official press release here on Dirt Track Digest.

When I think about the future that stretches out before the graduates I mentioned earlier I can’t but to want to offer sound lasting advice. If that’s you, I feel compelled to encourage you to push harder than ever before to fulfill your dreams. It doesn’t matter whether college or carrier is your hope, if you have a healthy dream for your future write it down and don’t let anyone talk you out of it. The Prophet Habbakkuk was given these instructions that relate to what I’m saying.

“Then the Lord answered me and said: “Write the vision and make it plain on tablets, that he may run who reads it. For the vision is yet for an appointed time; but at the end it will speak, and it will not lie. Though it tarries, wait for it; because it will surely come, It will not tarry.
Habakkuk 2:2‭-‬3 NKJV”

The Lord was speaking to Habbakkuk through a vision to reveal his future hope. The instructions He gave him were timeless in value. First, write down what you see in your heart for your future. Second make it simple to read, state it clearly. That’s so when other people that you trust to share it with read it, they’ll grab hold of your vision and help you get there.

Next, understand the strategy of timing. Just because you dream it now doesn’t mean you’ll get there now. Some things, most in fact, require us to grow into them. We need to develop the strength, wisdom, knowledge, and character to create and hold onto what we see for our future. Don’t lose heart or give up hope because obstacles fall into your path. Find a way to remove them or surmount them and keep going after it.

If you loose sight of it along the way God will refresh it to you in the right seasons of your life. Those moments will renew your hope, refresh your strength, and restore the direction you should be headed to achieve the manifestation of the vision. God promises that you’ll see it in your lifetime if you don’t lose hope. Just keep going.

“Delight yourself also in the Lord, And He shall give you the desires of your heart. Commit your way to the Lord, Trust also in Him, And He shall bring it to pass.
Psalms 37:4‭-‬5 NKJV”

The future holds big promises when you enjoy the company of the One that knows your beginning from your end. Jesus Christ said I Am the Way… He wrote your story to be uniquely different from everyone else’s, so that you alone can experience the desires of your heart. Others may enjoy the ride with you, but He specifically created the Way for you to become what He envisions you to be, regardless of what anyone else may say or think. Follow His leadership, Chase the vision He gave you, and hold on tight. The adventure of your life is just getting started.

We’re always available to clarify or help help you discern His roll in your life, and Your roll in Him.

Email us at: flchaplain@windstream.net, inbox us at Finish Line Chaplain on Facebook, or flag is down at your favorite dirt track.