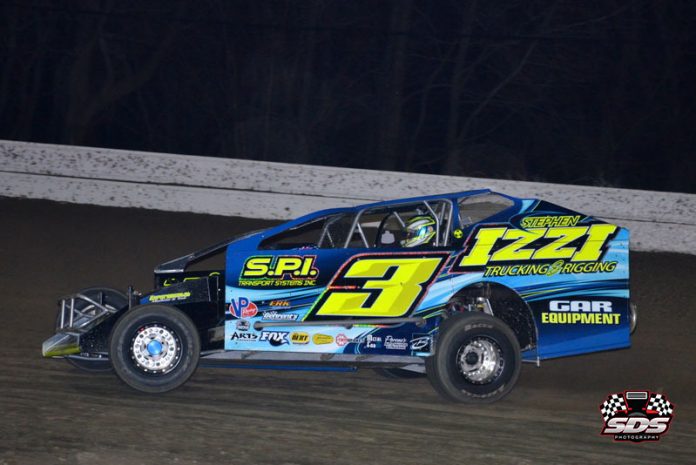 I know this is beginning to sound like a broken record but once again this weekend Mother Nature felt the need to put a damper on the wishes of the race fans. I have been going to races for over 40 years and I don’t ever remember a year like this where the weather has played such a big part in the plans of the drivers, teams and the fans like it has here in 2017.

Last year we had a bad stretch in May that pretty much wiped out the complete month but this year it has been constant week in and week out since the season began. Without going back through the schedule I think there has only been one weekend where the Modifieds have run at each of the NJ/PA tracks that are covered in the column. The weather issue which I speak of hasn’t just been affecting our area here but also up north as well. Weedsport Speedway has had every scheduled show up until last night rained out and at Utica-Rome Speedway they continue to be snakebit each and every Sunday night only getting in three out of their scheduled eight races so far.

Bridgeport Speedway was the only local track to be able to get their complete show in this weekend with Sammy Martz dominating the feature event on Saturday night winning by a large margin. Big Diamond Speedway was once again rained out on Friday night. On Saturday night, the Modifieds were off this weekend at New Egypt and at the Grandview Speedway the rains came just as the Modified feature was getting underway forcing the track to have to cancel the remainder of the night.

Big Diamond Speedway 6/23/17 – With the ever-popular URC winged sprints on the schedule along with the 358 modifieds, it was once again the rain who was the big winner of the night. The nights program has been rescheduled for Friday night August 11th.

This Friday night June 30th up in “God’s Country” will find the 358 Modifieds as the headliner along with the Sportsman, Roadrunner and Street Stocks. The Street Stock will run a 30 lap “Summer Shootout” feature paying $1081.00 to the winner.

Grandview Speedway 6/24/17 – In what was shaping up to be a great feature event to cap off the evening for the Modifieds came to end quite abruptly when a small but powerful rain shower came right over the speedway just as the Modified feature took the green flag. Before a lap could be completed in the feature a multi-car tangle took place in turn one involving half a dozen cars that resulted in the red flag being thrown due to the track being blocked. Amazingly all of the involved cars were able to restart the race after the mess was untangled. While the field circled the track once the yellow flag was displayed the rains came a little harder forcing the track officials to call the cars into the pits to see if the rain would pass. The rain did stop after a little while and call from the pit shack to the teams was that they were going to try and restart the race in about ten minutes. Unfortunately, not too long after that announcement the rains picked up and the call was made to cancel the remainder of the show. Even after the rains stopped shortly thereafter the call made the by the speedway was a good one as it would’ve taken at least an hour to get the track back in shape and it was already after 11pm at that point.

The 30-lap Modified feature will be made up next Saturday night July 1st making it a big night of racing at the quarter mile bullring in Bechtelsville, PA. Not only will the TP Trailers Modifieds be having double features but the BRC Late Models will take part in their annual “Firecracker 40” feature event. The Sportsman cars will also be on the card making a big night of racing up on the “Hill”.

If that isn’t enough, don’t forget on Tuesday July 4th the mighty 410 Winged Super Sprints will be back at Grandview Speedway for another “Thunder on the Hill” event promoted by Bob Miller. This event will be part of the annual “PA Speed Week” that takes place each and every year for the Winged 410 missiles. Scheduled to appear and take part in the show are NASCAR Stars Kyle Larson and Kasey Kahne. The 358 Modifieds will also racing as part of the show. Should be a great night of racing for everyone.

New Egypt Speedway 6/24/17 – The 358 Modifieds had the night off this past Saturday night giving the teams some extra time to tune up their cars for this Tuesday’s June 27th  60 lap “Garden State Gunfight”.

A strong field of Modifieds will be on hand to take part in the $6,000 to win “Big-Block vs Small-Block” feature event. Track regulars Billy Pauch Jr, Ryan Godown, Danny Bouc, David Van Horn along with a host of others will be there to defend their home turf against the wealth of invaders that will be on hand to try and steal the money and take it back to their home track.

Leading the group of invaders will be the hottest driver on the local modified scene “Flying” Ryan Watt. Watt has become the master of these big money paying shows winning over $20,000 since winning the Super DIRTcar Series race on May 16th at the Bridgeport Speedway. Also scheduled to invade on Tuesday night will be former New Egypt track champion Jimmy Horton in the Halmar #43. Former track regular Dominick Buffalino will also be there along with Duane Howard in the Norm Hansell #357. Other expected invaders include Jeff Strunk in the Glenn Hyneman #126, Anthony Perrego in the Superior #44, Rick Laubach, Wade Hendrickson and many others.

Also taking part in the night’s activities will be the Crate Sportsman vs Open Sportsman in a 25-lap feature event with a $1,000 going to the winner.

Bridgeport Speedway 6/24/17 – As has been the theme for most of this season, Bridgeport Speedway is the only local track that has been fortunate enough to steer clear of Mother Nature’s wrath. This night was no exception as the South Jersey oval was able to get their feature event in with no weather problems.

Sitting in victory lane at the end of the night was crowd favorite Sammy Martz. Martz took the lead from pole sitter Ron Roberts on lap two and never looked back as the 25-lap feature ran non-stop with Martz winning by over a five second margin.

For Martz, it was his first win of the 2017 season, which so far has been riddled with bad luck and mechanical issues. It was also the seventh career win for Martz at the speedway.

The balance of the top five behind Martz was Domick Buffalino, Richie Pratt Jr., Rick Laubach and Jesse Hill.

The South Jersey oval will return to action next Monday night July 3rd as round #4 of the Call before you Dig Colonial Pipeline Poker series takes place. It will be a big night for the Poker Series as also on the card for the night will be the 40 lap rained out Modified feature from May 28th making it a big night in deciding who will be the 2017 Poker Series champion.

Surprised to see Anthony Perrego in the pits on Saturday night at Grandview Speedway with the Superior Remodeling #44 Teo Car. Perrego, who usually runs at the Orange County Fair Speedway on Saturday nights, told me that the Bill Pasqual #3 that he runs at OCFS doesn’t have a big-block motor available at the present time after damaging two motors in the last two weeks. Perrego also told me he will be at Grandview next Saturday along with the Thunder on the Hill show on Tuesday and plans to return for the Freedom 76 race in September…

Jared Umbenhaurer who had a big wreck at Grandview Speedway a couple of weeks ago in the #19.  He looked to have finally got the car back to where he wanted it on Saturday night. The wreck damaged the car’s frame causing it to have be straightened. Jared told me on Saturday that last week the car still didn’t seem quite right forcing the team to look more into it this past week. Glad to say they must’ve have found something as Umbenhaurer rocketed from the eighth starting spot in his heat race to take the win. Unfortunately, with the feature being rained out they were never able to see how the car would do in the big race…

After weeks and weeks of hard work and not to mention lots of money, it looks like the crew of the Breitenstein #14 has finally been able to overcome their fuel problems. The team has struggled since bringing this car out earlier this year with fuel issues and had replaced everything they could think of to correct the problem. Saturday night it looked like the team had finally been able to correct the problem as Billy Pauch Jr. was fast and told me the car had a lot of power and wasn’t experiencing any of the problems they were having the past couple of weeks with either him or Mike Mahaney behind the wheel…

DRIVER OF THE WEEK: This week’s honor goes to Sammy Martz for shaking his yearlong bad luck and grabbing the checkered flag Saturday night at Bridgeport Speedway. Martz is a very popular and well-respected driver with both the fans and his peers and their race team is truly a family affair with everyone involved. Congratulations to Sammy, Chris, Angelica and Sammy Jr on the big win!