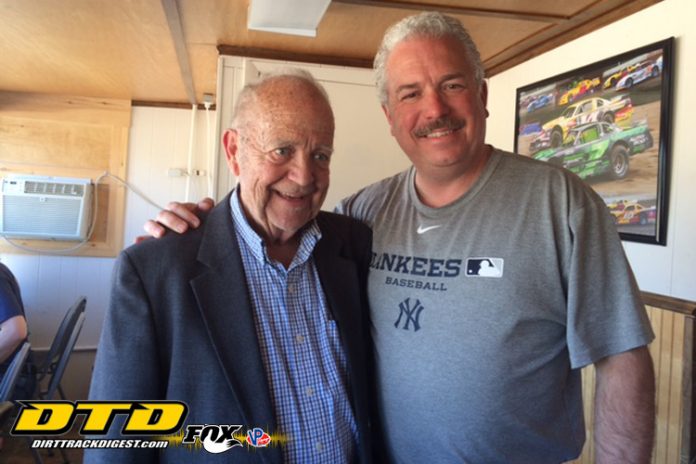 This Friday, June 30th is racing photographer, John Grady’s 87th birthday and his son Chris is holding the celebration at Albany-Saratoga.  With the help of historian, Bob Novak, there will be thousands of John’s photos on display at the track for fans to browse and many will be for sale.

John has been struggling with Dementia for the past few years and with the help of Andrea Johnson (Ronnie’s mom), was able to stay in his home until recently when he moved to Brookdale Dementia Care Facility in Niskayuna.  John’s wish has always been to get his photos to the racing community, “they’re no good sitting in boxes,” John has said many times.  Fans are encouraged to visit with John on Friday and browse through the thousands of photos dating back to the late 1950’s.  All proceeds from the sale of the photos will go to the Dementia Society.

When C. J.Richards took over Albany-Saratoga John stayed on as track photographer and by that time the rest of the Grady family got involved with his wife Sondra and son Chris running the novelty stand.  John moved to Fonda for a year in 1979 and then to Lebanon Valley where his grab bag photos became one of the track’s most popular selling items.  John returned to Fonda to work with his son, Chris who ran the novelty stand, selling photos and other racing novelties.  John was there for 15 years.

John earned a living as a teacher at Niskayuna School District from 1963-1987.  John also wrote a racing column in the Daily Gazette for ten years while also being track photographer.  He was inducted into the New York State Stock Car Hall of Fame in 2004.

John has many friends in racing and is known for his many stories and great sense of humor.  Stop by and visit with him this Friday at Albany Saratoga and celebrate the birthday of this local racing treasure.

Although we didn’t get much racing in this weekend (we visited relatives in Buffalo) we did get to Afton last Wednesday for Brett Deyo’s Afton Action 50.  It was a night of high’s and low’s for some drivers.  Andy Bachetti for one.  Although he is currently the most winning driver at Afton on Wednesday his luck was not with him.  He had problems qualifying and needed a provisional to get in the show.  During the feature he spun around in turns three and four and had to restart from the rear.  He did all he could to get back to the front but had to settle for fifth at the checker.  Allison Ricci made the trip with high hopes of continuing her great season but the cards did not fall her way.  Her heat race was loaded with the likes of Billy Decker, Mike Mahaney and Ryan Godown.  Allison did not make the cut and you could see the disappointment on her face as she responded with, “I need a big block.”  The happiest driver of the night was Stewart Friesen who won his heat and started 12th in the feature.  Taking the lead on lap 36, he went on to take home $5100 for his victory in the Afton Action 50. When we go to a track that we do not attend regularly we try and talk with a driver we are not familiar with and on Wednesday we spoke with the driver of a great looking No. 14 Sportsman, Kailee DiMories a regular at Thunder Mountain where she has two second place finishes this season.  Kailee has been racing in one form or another for the past eleven years.  She began her career in Micro Rods before moving to XXL’s and then to Sportsman three years ago.  Kailee says she enjoys her time behind the wheel and came to Afton for the first time on Wednesday to try her luck.  She said everyone treats her well and the better drivers have no problem racing with a girl.  Wednesday was a tough night for Kailee, she finished out of the top ten.  We commend her for being there and trying a new track.

We’ll be at the Big Show 9 this Tuesday, June 27th at the Great Race Place.  Until next week please send all news and/or comments to biittig@yahoo.com.