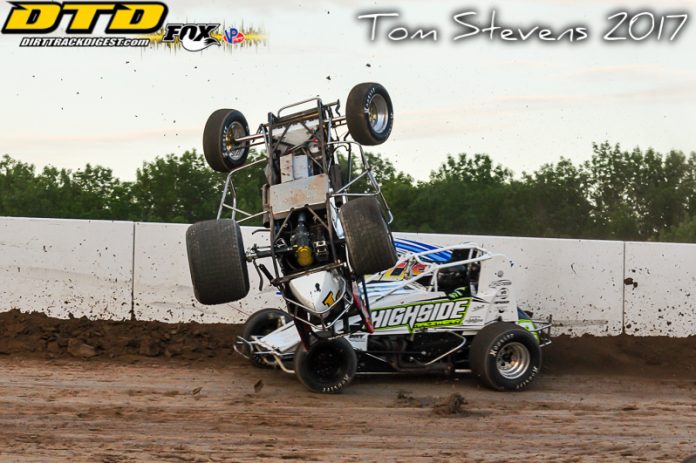 Empire Super Sprint cars without wings? A flip under yellow?? A car stuck in a tree over the turn one bank??? It certainly was one of the wackiest nights of racing in recent memory at Weedsport Speedway.

A fine field of 24 wingless 360 sprint cars arrived at the track on Sunday evening for the “Ultimate Wingless Shootout,” a $5,000-to-win, 25-lap event that combined both Empire Super Sprints (ESS) and United Racing Club (URC) drivers for what was likely the oddest show Weedsport Speedway fans had the chance to see in a long time.

The evening began with some slight showers just before hot laps were scheduled to start, but those soon passed and the practice sessions finally rolled out onto the track. It seems as though it just wouldn’t be Weedsport this year without the threat of rain every single Sunday night, as the previous four events scheduled to be run there this year were forced to cancel, thanks to Mother Nature.

Normally, people are used to seeing cars wreck and/or flip at racing speed. Somehow, Gulick and Dave Axton managed to get tangled up under yellow flag conditions going down the backstretch after the four-wide salute to start the race. It appeared that Axton caught the left-rear of Gulick’s number 14 and the bounce back down ended up turning the car over once, landing on its side. Both cars seemed to be unharmed and the official start was re-tried a few moments later.

At the drop of the green, Larry Wight made a spectacular move on the first lap to go from the fourth starting spot to the lead before the field got back around to complete the opening circuit.

A red flag on lap four was for heat winner Carmen Perigo Jr, who caught the outside wall in turn one and snap-rolled his car twice, ending his night. On the ensuing restart, another red was thrown for Scott Wagner’s number 21w, who rolled it over at the apex of turns three and four. Coincidentally, Bill Unglert and Kelly Hebing came together going down the frontstretch to slow down for the red. Hebing ended up on the topside of turn one with some rear-end damage, while Unglert collected Lee Ladouceur after the initial contact with Hebing, sending them both spinning into the infield. Ladouceur was able to continue on as his car did not suffer any serious damage. A different fate was evident for Hebing and Unglert, as they both ended their nights on the hook.

But after the restart, it was all Mark Smith. Wight tapped the wall in turn one a few laps after the restart, surrendering the lead to Smith, who drove it all the way to the checkers to collect his first wingless win at Weedsport and a hefty $5,000 check to go with it.

“We just stayed out of trouble, didn’t make mistakes and it worked out pretty well for us,” Smith said.

Most people are used to seeing Mark and the rest of the ESS and URC competitors drive with the wings on, but Mark does have a bit of non-wing experience – something he takes full advantage of.

“It’s pretty much completely different,” he said. “You just have to slow down your [corner] entries a lot, a lot more brake – just don’t push it. You can really screw up if you push too hard.”

Larry Wight came across the line in second, but not before having to take that spot away from Gulick. He and Wight engaged in a big battle for second with five laps remaining, when Wight finally caught back up to the Scorpion Security Products number 14. Wight was able to power around Gulick on the top side, something he knows how to do quite well.

“It was a good fight with him, we were sliding each other and I was able to get the advantage down the backstretch to get a wheel under him,” he said. “I think if we could have cleared him, maybe around 10-to-go, we would have had something for the leader.”

Wight also has a bit of non-wing experience, as he finished 13th in Tulsa, Oklahoma, at the Chili Bowl Nationals in January of this year. He says that experience goes a long way in mastering a full-size sprint car without the wings.

“I kind-of took all the knowledge from that and put that towards my driving style, because the midget to this drive very similar,” he said.

But Wight also understands the challenges of driving a bigger car on a bigger track.

“The car is completely unhooked going through the corner,” he said. “But when you hit the cushion, it just wants to rip the front-end off the ground. I almost think it’d be easier to run a 410 because you have enough power to keep the wheels spinning so you don’t hook the rut so bad.”

Gulick completed the podium with a strong third-place finish. He was noted by some of the other drivers and fans as the guy with a lot of non-wing experience already, as he drove in wingless events regularly for several years before strapping on the wing and racing in New York.

“I ran Indiana for a lot of years and got my teeth kicked-in by them boys for two years until I started to figure it out and I started getting better towards the end of my career there,” he said.

Gulick also shared his viewpoint on the differences between winged and non-wing sprint car racing.

“I think you can hustle a winged car a lot more than a non-wing,” he said. “These, you’ve kind-of got to take it easy. If you start to hike that left-rear off the ground, it gets a little sketchy. You don’t have the wing holding you over and carrying your momentum through the corners. It’s definitely tricky if you just jump out of a wing car and into a non-wing – it takes seat time and a lot of experience to be good at it.”

Gulick’s battle for second with Wight in the closing laps featured some of the most intense racing of the night. Wight eventually pried the spot out of his hands, but Gulick gave a valiant effort.

“I knew he was faster than I was, I just capitalized on his mistake in one and two,” he said. “I couldn’t get off the corners like he did. I tried to get back under him and he just pulled away.”

Practice session number one kicked off an evening of wrecking racecars, as Tyler Cartier got into the first turn wall and flipped multiple times over the bank, landing in a tree at the base of the bank behind the wall. “We need a chainsaw in turn one” was the call heard over the track radio, according to the track’s Twitter feed. Cartier would not return for any further nightly action…

In the same session, Robbie Shuttleworth hit the fourth turn wall very hard, heavily damaging the front end of his car. This unfortunately ended his night as well…

Track conditions were tacky for the heat races but slicked off later in the event. The Sportsman class ran their feature race before the sprint cars took to the track, which pushed the cushion a bit higher up the track. However, runner-up Wight said the berm was unlike what a lot of the wingless regulars are used to seeing.

“It definitely slicked off, but there was still a good cushion around the top – it was a little chunky getting into [turn] one,” he said. “You watch a lot of the videos of these guys and that was nothing compared to a cushion they normally run on, it’s more of just everybody around here not being used to trying to send it in on something like that.”

“The track stayed good. The cushion was big enough where you weren’t going to move it – not with only 24 sprint cars,” he said. “Normally you’ll get 30 to 40 sprint cars here and you’ll move that cushion a little bit.” …

Catch all of the ESS and some URC drivers at any of the five tracks during the 5th annual Donath Motorworx Central New York Speedweek, beginning Wednesday, June 28th at the Can-Am Speedway in Lafargeville, New York!