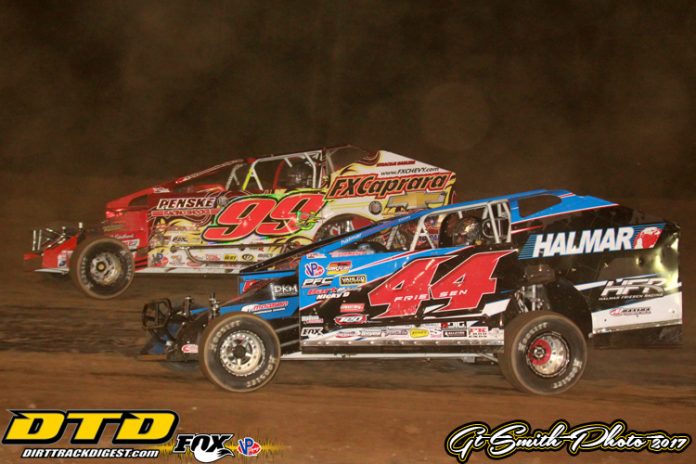 There was some obvious disappointment in Stewart Friesen after giving up the lead late in Tuesday night’s Big Show 9 at the Albany-Saratoga Speedway. He led before a restart on lap 75 which saw him fall from the lead back to third. He rallied to get back by Larry Wight before mounting a late charge on Tim McCreadie. He moved to the back bumper of McCreadie and even pulled alongside, but he couldn’t find an open lane to make the pass, thus finishing second.

“We had a great race car on the long runs,” commented Friesen. “You never want to see a caution when you are leading. The top cleaned up where Timmy (McCreadie) could get up there and beat it. He’s tough. He’s one of the best in the business so second to him is not a bad day. I’m proud of our Halmar (International) race team. These guys worked really hard to get us back on point to where we need to be after we lost track the last couple series races.”

Friesen’s Billy the Kid Performance powered Teo Pro car was nearly perfect. As McCreadie entered traffic with 15 to go Friesen reeled in McCreadie. He put a door underneath of McCreadie on the final lap only to come up just short. It was a step in the right direction for the team after some struggles the last few Super DIRTcar Series races.

“It was good,” said Friesen. “That is something we haven’t had here that last few times, a car that came on late as the track glazed back over. I was able to roll the middle in three and four and maneuver the car around which was awesome. It is something I haven’t been able to do in a long time.”

Sheppard Comes From 12th to Third

Matt Sheppard had the furthest to go of everyone who finished on the podium. The Waterloo, N.Y., driver started 12th after missing the redraw in the heat race. As he always does, Sheppard methodically plodded his way forward through the field. At one point he was passing Wight for the runner-up position and had the pass completed before it was negated by a caution. To Sheppard, that changed the outcome of the event.

“With the bad starting spot I needed long runs, but definitely being on the inside on that restart was a big killer,” stated Sheppard. “I got by Timmy (McCreadie) because he was trapped on the bottom. I needed one more lap. If I could have cleared Larry there, then I could have been on the front row for the restart and that probably would have made a big difference. We got better as the runs went on, but we lost too much ground being jammed up there and took too long to get going again.”

Wight Fades Late in the Run

Wight, of Phoenix, N.Y., was good early in the 100-lap affair but his car went away late in the run. He led the race for the first 46 laps before giving way to Friesen. He regained the lead briefly on lap 76 before watching McCreadie rocket by him on the outside a lap later.

“We were really good, but it seemed to be as the track went away our car got a little bit too loose,” mentioned Wight. “I couldn’t stick the right rear quite as well as I wanted to be able to. I think we were moving through lapped traffic alright, but I just hit a point where I couldn’t clear them quick enough. That allowed Stewie (Friesen) to get a door underneath me. He was real good creeping around the tires.”

Wight fell to fourth after jumping the cushion in the final laps. He tried to roll the top like McCreadie but his car just wasn’t setup to be able to do it.

“I never thought you’d be able to beat the top like that because it gets so far out,” said Wight. “It seemed to be if I got up there and ran it that hard it would pull the nose and I’d jump the cushion. I had to run just below it or try rolling the middle. Typically here it’s around the middle and bottom. We were thinking that is where the race is usually won. It just didn’t work out the way we thought.”

Hearn Happy with the Big Show

Brett Hearn ended up finishing fifth in his self-promoted show. The Sussex, N.J., had a great view for the battle between the leaders at the end. Unfortunately he wasn’t able to be a part of it. The team chunked the right rear tire which caused Hearn to lose the lead pack late. Overall, even though he didn’t win, he was happy with how the entire night went.

“It was hell of race,” said Hearn with a smile. “I was in the catbird seat. I tried to get in the mix there at the end but it didn’t work. I thought the event was electric. A couple things we did were really good. The announcers did a great job. The racers did a great job. All the races were pretty safe races. There were a couple small incidents and that just goes to show you how good these guys are. Not only the Modified drivers, but the Sportsman as well.”

Pat Ward was the quickest car of the 45 taking time, it was his first since Rolling Wheel Raceway in 2006…

Jeremy Smith qualified through his heat race event in his first ever visit to Albany-Saratoga Speedway. Smith was shaking down his No. 46 in preparation for the Short Track Super Series set for Tuesday, August 15…

The No. 816 normally piloted by Jeff Rockefeller saw Pro Stock ace Kenny Martin behind the wheel. Unfortunately the combination failed to make the main-event…

Former Big Show winner, Bobby Varin, came up one spot short in his consolation event to making the show…