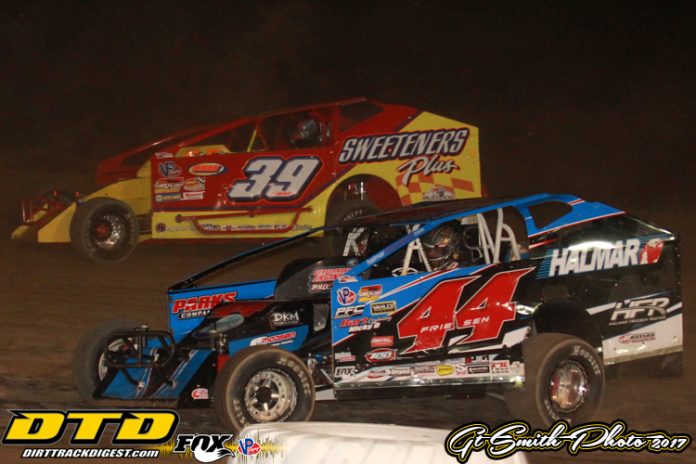 The last time Tim McCreadie parked his No. 39 in Victory Lane with the Super DIRTcar Series was November 5, 2011 at the Dirt Track at Charlotte. It wasn’t for lack of effort, but rather the lack of opportunity that caused his dry spell. He spent most of that time running a hectic schedule that sees him all over the country in dirt Late Model competition.

Tuesday night at the Albany-Saratoga Speedway, McCreadie took advantage of an off day in the schedule to compete with the big-block Modified. He never expected for the night to turn out the way it did. Sometimes everything just works out. That was the case for McCreadie in the Big Show 9 as he took home the win.

“It was amazing,” commented the Watertown, N.Y., driver after the win. “I didn’t expect it for one, I mean I expect to run good, but to come in here with the talent, as good as good as these guys are, and really how the race kind of went.  I figured that when I couldn’t get to the lead after I got to second that I was going to run third or fourth. On that last restart I needed to be on the outside, I got the outside. I needed everyone to get off the outside and it kind of just worked. I faded at the end a little bit, but that’s the way it goes.”

The race was his first start of the season in a Modified and it concluded much better than his last time out which ended in disappointment at the Oswego Speedway. Even with the extended break, there wasn’t much rust to shake off for McCreadie.  The team went with a basic setup which paid huge dividends at the end of the night. $10,000 worth to be exact.

“I’ve done it (raced a Modified) so much,” commented McCreadie. “I haven’t done it a lot lately. I ran one race last year, but I grew up doing this. When I’ve done it before when we were bad we tried to do crazy cars, crazy setups, and different stuff. If you don’t run every weekend and take it to the same place every Saturday where you can tinker with it, you can’t come in here and beat these guys. The last couple of times, like last year at Oswego (Super DIRT Week), we took Vic’s kid’s car because they raced it all year. This car here is brand new tonight. It is a car that Matt Sheppard went to and Vic went to last year and they liked it.  It’s a car certain guys have liked from Bicknell. We put the shocks on it that they would normally put on it to try and let this race team shine. It’s a great race team. We showed that it is talented and I was hoping that I didn’t screw it up. I got acclimated pretty quickly.”

McCreadie was quick to give credit where credit was due. As he said he had a great race team behind him. He gave a lot of credit to CME Incorporated partner Vic Coffey for all of his calls and hard work on the night. He also had some help from Vic’s other driver Matt Sheppard.  The team actually had one of Sheppard’s shock on the car after they had left theirs back at the shop.

“Vic knows what he’s doing,” stated McCreadie. “Vic’s been good with all this stuff. He’s driven these and won in these cars. I relied on him for every shock change and lot of the setup stuff I didn’t know.  He was way more decisive and we went with it. Vic made every call on the shocks and some things under the rear-end that were different when we showed up. I relied on him. I made gear, stagger, wedge, and that type of stuff like I’m used to doing.  It all worked out.”

McCreadie was fast early on in the 100-lapper as he got to second in the opening stages. He applied pressure to the early leader Larry Wight. He was never able to get a run on Wight. After not being able to secure the lead he fell back a bit as Stewart Friesen was able to get by along with Sheppard. He hung inside the top five for much of the race.  All that was before a restart on lap 74.  Everything panned out as he jumped from fourth all the way to the lead.

After taking the lead, McCreadie continued to blast it in on the cushion. That seemed to work in open track, but during the final ten laps things got a little scary for McCreadie. He struggled trying to get through traffic.

“When we caught traffic, it’s weird when you catch the wrong guy like later in the race, they hang their back-end out just a little bit and on the straightaway you can’t drive in deep enough,” mentioned McCreadie. “If you’re already on the verge of being a little free like I was, the car will set down and then it will lose the right front for a second and then you slide. I needed to go in and put my right rear on something to keep the car up and keep it activated. Every time I got to someone that would swing out I had a little trouble. I had some trouble with Ronnie (Johnson) because he was swinging out. I didn’t want to clip him with my left front tire. With him, once he knew I was near him he got right out of there, other guys were racing. I was in trouble when somebody else was up there in that. It just dirties the track. I was happy to until then.”

McCreadie gave a lot of props to the motor program which he credited with allowing him to rebound from an excursion over the cushion with four laps to go. He was able to quickly get back on the throttle allowing him to jump off the corner.  That kept Friesen behind him for the remainder of the race.

“I didn’t realize I did it until I got over it,” he said in reference to the cushion. “The cushion was way out there off of two. When you hooked it, it pulls hard. I owe a lot to the way Vic (Coffey) and them do the cars. Also, this motor is a very good motor. I’ve had motors from C.C. (Performance) before, but the combination that they put together is more to my liking. I like something that has a ton of bottom end and not as much big end stuff. That way I can do things like that. I can get in trouble and get out of it.”

Unfortunately for Northeast race fans McCreadie’s Modified schedule is still in a bit of limbo. He’s got only a handful of races on the schedule for the rest of the season. That is unless things continue to go his way. Then, who knows, he may make even more starts with the Modified.  That would make several race fans very happy.

“I’m going to run again on Thursday at Canandaigua (Motorsports Park) as long as nothing is hurt,” he said. “Other than that I’m not sure. I think I have six races that I can do. It’s just hard. I’d love to go to the track up north, Plattsburgh (Airborne Park Speedway), but I don’t think that’s going to happen. I don’t know. If we keep wining and making money I’ll do more because I can afford the plane tickets. You start plunking down money to fly back and forth across the country, I can’t do that. I’ll do what I’m able to do.”

It was a great night for sure for McCreadie and an even better night for Northeast race fans as they got to see MCreadie dice it up with the best again.  It’s something fans I’m sure will want to see more of in the future while the Super DIRTcar Series regulars hope it only comes a handful of times.