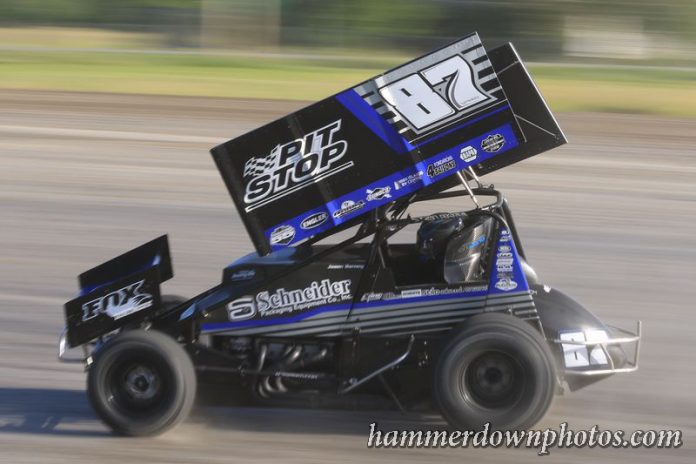 Every so often folks go outside of their “comfort zone” and try something considerably different.

Such a person is Jason Barney as just a few short weeks ago he had a SprintCcar odyssey which sent him across the country at the legendary Devils Bowl Speedway in Mesquite, Texas; Lawton Speedway in Lawton, Oklahoma; Creek County Speedway in Sapulpa, Oklahoma; Randolph County Raceway in Mobley, Missouri and the Lucas Oil Speedway in Wheatland, Missouri.

Jason traveled to Texas, Oklahoma and Missouri to compete in a National ASCS Sizzlin’ Summer Speedweek.

Joined by his crew he explained, “You really have to over prepare for something like this, you need to do as much as you an at home to get ready. It is actually good preparation for this ESS Speedweek. We knew we had to have everything together as we had no friends out there and basically we were by ourselves. We brought along two cars, worked nights on the cars because it is 100 degrees during the day and we just aren’t use to that. We split racing between the two cars.”


The goal was to run five tracks in as many nights, but everything didn’t go according to plan.

Jason said, “We ran four races, but skipped the last one because we thought it was going to get rained out…it didn’t.”

However, it was worth the trip.

Devil’s Bowl is a renowned track and Jason explained, “I have never been there, but got second in the heat and was feeling okay. At first I was uncomfortable as I didn’t know much about the track. It didn’t go well as we finished 13th.”

It was on to Lawton and the track was different from the first stop. Reflecting on the night,

Barney said, “It was not as big as it looked. Turns one and two were tricky, in fact more tricky that I thought. Three and four you could barrel through and the car would stick. One and two were really technical turns and sort of like Brewerton. You had to slow down going in, but to needed to get the momentum up exiting the turn to get through three and four. We were fourth there last year and I felt we improved. I think we had a shot as we were third racing for second and got into (Aaron) Reutzel and backed up to sixth. We had a good car, but the track had taken rubber late in the race and we couldn’t get back up.”

Creek County was next up an the battle for the team wasn’t simply race tracks, but getting there as he noted, “It was four and a half to six and a half hours between each track and it was work just to get from track to track.”

Barney enjoyed Creek County and said, “You could put the track inside the infield at Brewerton and still have room. It was fun. We won a heat and finished in fourth place. I was trying to run the outside a little more, but due to a couple of driver errors Justin Henderson got us for third and we settled for fourth. Those errors cost us, but it was a good run.”

From one extreme to another could be a way to describe what turned out to be Barney’s final tour stop as they went to Mobley.

“It is as close to Eldora layout wise as you can be,” said Jason, “We made some big changes. Guess you could say we swung for the fence and struck out. We then did a complete opposite change and were up to ninth or tenth, but with six laps to go the engine was getting hot. We had made strides and my mechanic Brandon made some great calls to get us in it.”

Being on the road isn’t easy and Barney explained, “We were on our own, out of our comfort zone away from our families. It forces you to focus on being focused. We came together as a group, and you have to be, during that five days. You need to set up cars for tracks that you are unfamiliar with and the competition is good.”

Continuing he noted,” There was good competition out there, but there also is back here. One major thing is the differences out there as they allow different right rear, different wings and the format is based on passing points with double heats. Those heats help you race better as you become more familiar with the track.”

This is the second year Barney has stepped outside his comfort zone and headed out west to play in the ASCS National Tour.

The venture allows him to gauge himself against some of the best and he more than held his own. Out there he faced off against Sam Hafertepe Jr., Aaron Reutzel, Seth Bergman, Josh Baughman, Tony Bruce Jr., Harli White, Skylar Gee, Wayne Johnson, Johnny Herrara, Justin Henderson, Ian Madsen, Brian Brown and others.

Now it is time for his second speedweek in a month and after a top ten at Can-Am he hopes to build momentum at Canandaigua, Brewerton, Fulton and the finale at Utica-Rome.

It doesn’t get much easier when Barney hits the Central New York tour this week as he squares off against the likes of Lucas Wolfe, Mark Johnson, Mike Mahaney, Danny Varin, Chuck Hebing, Steve Poirier, Larry Wight, Coleman Gulick, Paul Kinney, Shawn Donnath and many others.

However, Barney has shown he’s up to the task and at least it won’t be four and a half to six and a half hours between each track and it certainly won’t be 100 degrees.