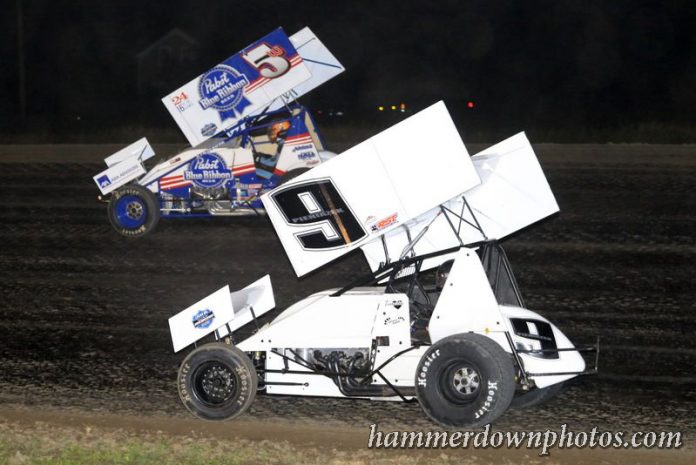 Round one of the 2017 Donath Motor Worx Central New York Speedweek got underway Wednesday night at the Can-Am Motorsports Park, and what a drive to victory it was for the man from Mechanicsburg, Pa., Lucas Wolfe.

The former World of Outlaws and current Pennsylvania Posse driver finished third in heat race number four from the third starting spot, which was enough to get him the very last slot in the re-draw. Little did he, or anyone else in the grandstands full of spectators, know that each of the 11 other drivers to draw before him would miss the t-shirt with the number ‘1’ on the tag…

The unlikely outcome in the re-draw sat Wolfe on the pole for the 25-lap feature event. Right from the drop of the green and the dive into turn one, side-by-side with outside pole-sitter Danny Varin, it was nothing but the Pabst Blue Ribbon 5w. Wolfe drove away from Varin and the rest of the field out of turn two and never looked back. Green to checkered, he led every lap on route to his first victory in his first start at Can-Am, and first CNY Speedweek win.

Wolfe drove his car in multiple racing lanes throughout the night, going from the top side to the bottom to get around traffic.

“I felt good at the bottom right at the start, then got up the track and I felt good but it was such a long way around – it was hard to tell,” Wolfe said. “And then as the race went on, it [the track] did get a little abrasive so the bottom kind-of came back into being the choice. But that’s what makes dirt racing interesting – it gives you the opportunity to move around.”

The track conditions were about as dry and slick as a Sprint Car racer will ever have to deal with during the heat races. But the track crews made the most of the intermission between the qualifying events and features to prepare the surface for the A-main and even the Sportsman class’ 30-lap feature, run before the sprint cars, making for a moderately-tacky track that eventually slicked back off again further in the evening. This type of dry and slick racing surface can sometimes give drivers headaches, but a seasoned veteran like Wolfe knows how to race in these conditions.

“It was a bit tricky due to the track preparations that went on between our heats and the feature,” he said. “They did a great job at bringing the track back into a good, race-able shape. All things considered, I think it was actually a really good track – you could race high, low, middle, and change as the race went on.”

Wolfe had put such a gap between he and the field early on, that by lap six, he had already caught the rear of the field and began putting cars a lap down. At one point, Wolfe had put 11th and 12th place finishers Larry Wight and Shawn Donath down a lap, but they were able to get back by the leader in the final circuits to stay on the lead lap. Most of Wolfe’s work in lapped traffic was done on the top side of the track, sailing around over half of the field within the closing laps. It seemed the moves he made in traffic were the ones that put him atop the podium.

“Traffic was actually pretty good for me early because I kind-of had the top lane to myself,” he explained. “As it went on and the bottom starter coming in a little bit, it got more into a situation where I had to race with the guys.

“Ultimately at the end, I caught a group of four guys that were racing amongst themselves, so it became a little bit difficult to get clear of them at the same rate as I was early,” Wolfe continued. “Certainly always a concern when that’s the case, you never know exactly where to go – it’s easy to make the wrong decision. But you just try and keep the speed up as best you can and not get held down too much and allow somebody behind you an opportunity to come and get you.”

Coming off a win on Sunday night at the Weedsport Speedway in the Ultimate Wingless Shootout, Mark Smith backed-up that victory with a second-place finish Wednesday night. Smith came from the eighth starting spot, all the way to second in just six laps. He gave chase to Wolfe the entire race, but would eventually run out of laps and was unable to catch the leader. Smith said a caution was all he would have needed.

“I needed a caution, I think we would have pretty much won the thing, but that’s how it goes,” he said.

Tire wear can sometimes be a big factor in races with dry, slick surfaces, and Smith noted that with the changes to the track conditions.

“It was still pretty slick in the feature, it kind-of was starting to go back to the way it was in the heat races,” he explained. “We tore off seven tires tonight.”

Smith’s climb from eighth to second didn’t take long, but getting through lap traffic was a bit more of a challenge. He stayed roughly the same distance from the rear of the leader, once they both got in deep traffic, due to the number of cars he had to pass.

“That kind-of hurt us a little bit there toward the end because we got up to Lucas, and then we got to the lap traffic and it kind-of held us up a little bit,” Smith said. “Other than that, it was a pretty good night.”

Danny Varin drew the outside pole in the re-draw from a win in heat race number two, and picked up a third-place finish in the feature. He ran consistently in the top three the entire race, moving through traffic as swiftly as the other two leaders. However, Varin was also making his first start at Can-Am in a sprint car, and did not have any previous notes to look to for car setup – something he says may have cost him the top two spots.

“This was the first time here, so we didn’t have a notebook to rely on,” Varin said. “We’re just going by car feel, and then they went into track prep, so we just didn’t know. At the end of the night it hurt us, but that’s why we came up here – we wanted to start building a notebook a little bit. We don’t get to venture out too many places, so tonight was definitely some help. It just sucks when you feel like you might’ve had something if you straightened your car out a little bit.”

Can-Am got a positive review from Varin; he said he likes the challenges that the shape of the track presents. He’s a seasoned veteran in the big-block modified class at both Utica-Rome and Fonda Speedways, also running in the sprint car events hosted there each year, and notices the similarities and differences in those two tracks compared to Can-Am.

“It’s a tricky place, but that’s what makes it so much fun,” Varin said. “You get two corners that are completely opposite. It was definitely a blast to drive here tonight.

The track surface was dry and slick during the heat races and began to take rubber that caused passing to be at a premium….

Heat race number one was captured by one of the youngest drivers in the field, Paulie Colagiovanni. Following him was Matt Tanner and Mike Mahaney…

Heat two was won by one of the only drivers in any heat race to pass multiple cars on his way to a win, Steve Poirier. Paul Kinney and Cory Sparks completed the podium…

A grand total of 34 cars showed up to the track, but only 33 made it out for the qualifying events. Chuck Hebing ended his night far earlier than expected when he broke a lifter in his engine after attempting to get heat in the motor…

The 2017 Donath Motor Worx Central New York Speedweek continues in the second round of action on Thursday night at Canandaigua Motorsports Park!