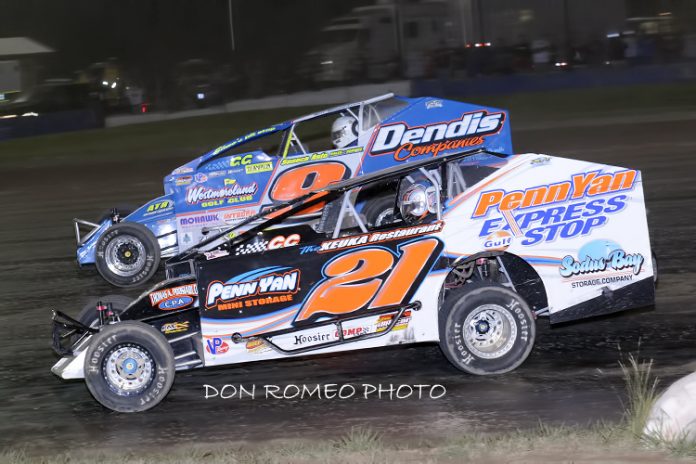 It seems “The Track of Champions” and “The Land of Legends” have both been dominated by two of the biggest names in big-block Modified racing this season – Stewart Friesen and Matt Sheppard. They both have the most wins by any driver running for points at their respective tracks so far this year, and show no signs of slowing down. On Thursday night at Canandaigua Motorsports Park, Sheppard collected his fourth victory of the season by dominating the $3,000 to win event.

Sheppard drew the outside pole in the re-draw, took the lead on lap two from runner-up Erick Rudolph and never looked back, leading all 40 laps on a very slick racing surface.

“I felt comfortable on the bottom, but the car was pretty neutral, I could run wherever I wanted to,” Sheppard said. “I just didn’t want to burn the tires off when we got up front.”


“I just like how racy it is, how wide – a lot of room to maneuver, a lot of room to pass,” he said. “You need a really balanced race car. You need grip, but you need to steer too – I just love racing here.”

Erick Rudolph came across the line in second behind Sheppard, who is the man to beat at almost every track he goes to. Rudolph and the rest of the field know exactly who their best competition is, and they’re all working toward getting better each week to post better finishes.

“Matt Sheppard’s been the one to beat here on a weekly basis, and he got the best of us this week,” Rudolph said. “We have a little bit of homework to do to keep up with him, but as a team, we’re proud of our run tonight.”

Rudolph is also looking forward to having another strong run this weekend at the Utica-Rome Speedway, when the Super DIRTcar series rolls into town for their first appearance of the season.

Justin Haers completed the podium with a solid third-place finish, but not without fending off some stiff pressure from the two-time Canandaigua winner this season, Alan Johnson. Johnson chased Haers for the third spot almost the entire race, but Haers was able to hold onto the spot, even after a caution for a slowing Steve Paine with five laps to go.

“I tried the top on that restart, and I think I got my tires a little too hot,” Haers said. “When I went back to the bottom there, I couldn’t get back with the gas at all. I knew somebody was probably pretty close by, but there wasn’t really a ton of racetrack out there to be moving around too much. But we’ll take home a third place.”