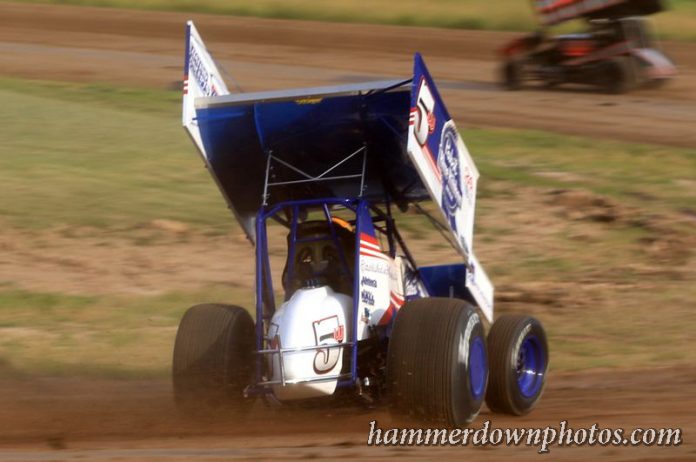 In Pennsylvania when some drivers talk about the Empire State racing surfaces they refer to them as “New York Slick.”  Even some World of Outlaw drivers noted that New York possesses some of the more unique surfaces that they confront on their nearly 100 race annual tour.

However, 30-year-old Lucas Wolfe accepted the challenge recently and headed North to compete in not only this week’s Speedweek, but at the Ultimate Wingless Challenge at Weedsport.

Lucas says, “The material is different up here. The tracks are slicker and shinier. They clean off and the tracks up here are bigger and flatter.”

Last Sunday he took the wing off and it was a rare occasion for the Pennsylvanian. Explaining his reasoning he said, “I haven’t run without a wing since 2008. I’m a racing professional and it was a tremendous purse. Also I have sponsors that are Syracuse based and I had a sense I wanted to be up here to support them.”

On Thursday night he visited Can-Am Motorsports Park for the first time in his career and it is the first of a 12 race effort for Wolfe.

Looking ahead to the near two week period he said, “I am racing Can-Am and then Canandaigua. Then I will leave and head to Pennsylvania for Speed Week. It is a brutal week as there are ten races in ten nights and it is tough on my crew because they all have full time jobs. It is tough on equipment, crew and fans. It can burn you out and is a huge commitment.”

It seems strange that he hasn’t seen the track before because he is a genuine traveler.

He talked about his time on the road and said, “I was on the road with the World of Outlaws for a full five years. It was brutal. You are running different places every night and there are new challenges on a regular basis. Sometimes just making it to the track with all the traveling was a major accomplishment. However, I was racing with truly the best racers in the country.”

Wolfe stated, “I grew up going to half miles such as Williams Grove, but I enjoy the smaller tracks because of the different challenge they present. It’s interesting that once I left the Northeast and traveled there weren’t many true half miles. Most are quarter or three-eighth’s of a mile tracks with different configurations. It was a great experience.”

In going to different tracks one would think adjustments would be difficult.

Lucas said, “You can look at tracks on You Tube to get an idea of what they are like, but in the end you have to rely on the experience of running a Sprint Car on a dirt surface.”

He noted that asphalt racers get plenty of time to practice when they compete in an event. In regards to dirt racing he said, “When you get to a track there is no testing. It is one big struggle as you are competing against the track. You have to do the right thing at the right time.

Since 2003 Jim and Laura Allebach have sponsored and supported the racing exploits of Wolfe with their equipment and in Central New York R.C. Faigle has partnered with the team in a 360 effort that includes a new J&J Chassis along with a Jim DeLucia power plant.

He has one of the most beautiful Sprint Cars this season as Pabst Blue Ribbon emblazons the machine and Faigle’s Orange Crate Brewing (in Syracuse University area) and Fayetteville’s Orange Crate Express are joined by Axa Advisors to put this potent machine on the tracks.

Faigle said, “I was involved with Zemco Speed back in the 90’s and Donnie Wolfe was a representative for the company that I knew. When Lucas came to the area on the World of Outlaw Tour I would be there for him. I drove at one time and raced for Roger Heroux in a Big Block and Sprint, and did my own thing. However, I now have the resources to get involved in this and in supporting Lucas for so many years I am glad that I am able to have him come to Central New York to race.”

He started off the week in Central New York at the Ultimate Wingless Shootout at Weedsport with a fourth place finish, won on his first ever visit to Can-Am and had to settle for a seventh at Canandaigua, but now he heads home to familiar stomping grounds and straps himself into a 410 Sprint for the next 10 nights.

Can-Am wasn’t an easy night (at first) for the 5w as he finished third in his heat, but did get into the draw.

Skill and experience is critical in racing, but sometimes luck needs to play a hand.

The draw saw Wolfe the final of a dozen drivers to select a starting position. Through ten drivers only one and eight were left. Mark Smith, the 11th driver to draw, walked up, selected and turned to Wolfe and smiled.

Did the smile mean he had chosen the pole?

Well, the smile turned out to be one of those envious ones as Smith had “8” leaving the pole as the final selection.

Wolfe used that to his advantage in a green to checker feature as he outdistanced Smith who came from eighth to second in seven laps, but that was it.

What a difference a draw can make.

Wolfe will be working nights for the next 10 days, but unlike the majority of folks with a job his duties will be being strapped into the cockpit of a 900 horsepower 410 Sprint car racing on some of the legendary tracks that the Keystone State has to offer.

Not a bad job it you can get it!