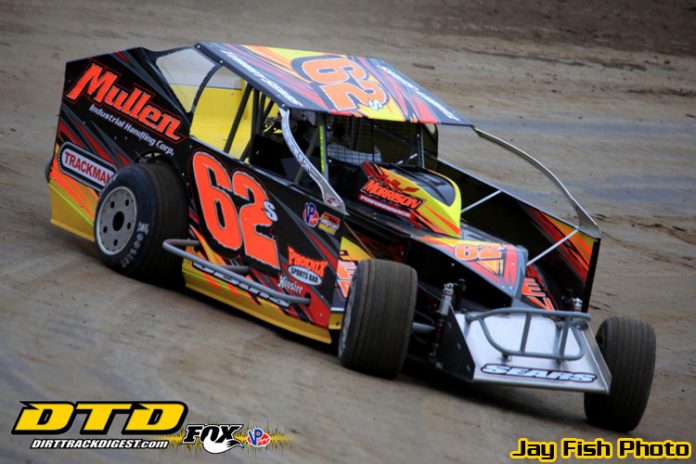 Round four of the 2017 Donath Motor Worx CNY Speedweek at the Fulton Speedway on Saturday night was accompanied by a firework display and the big-block modifieds, in which Tom Sears picked up the win in very convincing fashion over Max McLaughlin and Pat Ward.

Sears started on the front row and grabbed the lead from Matt Hulsizer early on in the 35-lap race, and went untouched on route to his second victory of the season at Fulton.

“We had a good car all night long. We’ve been fast since we won last time here,” Sears said after the race. “We broke down and had an engine failure last time so this is a good redemption and, hopefully, we can keep moving forward.”

When a driver finds victory lane once during the regular season, it shows they have the ability to run up front and compete with authority. But twice or more goes the extra mile and proves the first win wasn’t a fluke. Sears backed that first win up on Saturday night.


“Anytime you win early in the year, it prolongs the season. Hopefully, it keeps going,” Sears stated.

Max McLaughlin scored his first runner-up spot of the season at Fulton, coming from back in the 12th spot.

“We just need to start up front, this handicap deal at these tracks on the weekends is a little tough,” he said. “But we’ve got a really good car and a great team. I think we’re one of the only cars to come from deep in the field, so I can’t say I’m upset with a second.”

The bottom lane seemed to be working well for McLaughlin, as he was up to second by the halfway mark, doing most of his passing down there.

“The bottom was really good for us. There was just a tiny bit of grip down there and if you got your left sides in it, you could get a really good drive off,” he said. “We found that early and got lucky enough to make it all the way to the front.”

McLaughlin will also be at Utica on Sunday to race with the Super DIRTcar series.

Pat Ward rounded out the top three with a solid drive to the front, getting around Matt Hulsizer on the top side for third in the last quarter of the race.

“I found the top wasn’t too bad, if you hit it just right,” he said. “You had to get the right-rear right in the right place, or else you would hit the black and spin the tires.”

The “Genoa Giant” has a lot of experience at the high banks – something he attributes a lot of his weekly success to, which he enjoys every bit as much as his fans do.

“This is my favorite track, it’s really good every week you come,” he said. “Tonight, they had all that rain, so there was a bunch of holes. But that’s not the norm – this is usually the most fun track to go to.”