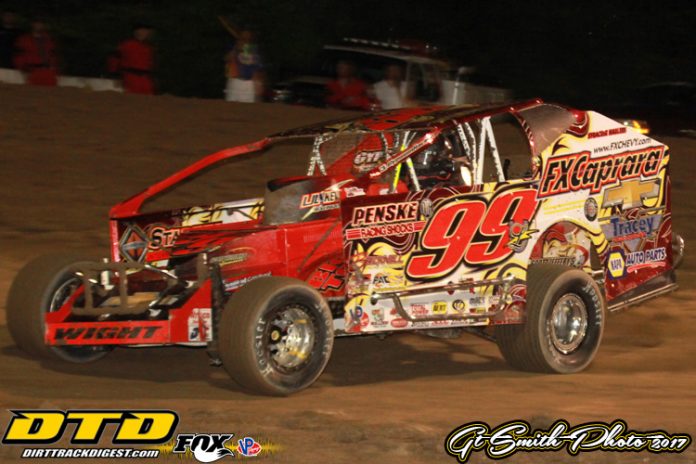 Who says the weekly regulars can’t come from the back and win? Billy Decker’s done it twice so far this season at “The D-shaped Dirt Demon,” once from 14th and again from 17th. On Friday night, “Lightning” Larry Wight didn’t exactly come from the “back,” but won again, this time from the third-highest starting spot in the field this season.

Wight rolled off the starting grid on lap one from the 11th position and was able to pick up seven spots in just 14 laps. After the lap 14 caution, Wight restarted from the fourth spot and made a bold move off of turn two, pulling alongside then-second and third-place runners Adam Roberts and Matt Hulsizer, drag racing both cars down the backstretch. He would pass them both before turn three and proceeded to power around the outside of leader Tim Kerr. Yes, that was all in one lap.

Seven laps later, Larry’s lead was up to a full straightaway. There was simply no catching the 99L that night. Or that morning, I should say, as the modifieds finally rolled onto the track at just after midnight as a result of the heavy rain delays earlier in the afternoon.

“We were able to start 11th and get right to fourth quick, and that gave me some time to work on the top four cars,” Wight said of his victory after the race. “It’s a lot easier when you can pace yourself like that.”


Wight did the majority of his passing on the topside of the speedway; his most vibrant passes being the ones to get spots three, two and one.

“I knew the top would be smooth for one, maybe two laps, so I had to had to make it happen quick,” he said.

Some people on extra-tacky surfaces see the high line as being too dangerous. Wight sees it as another lane to get by, if you know how to use it at the right time.

“If you can get a caution to pack it down, you actually get good traction up there,” he explained. “Even if you’ve been green for a while and there’s marbles, sometimes it’s just smoother – you’re not bouncing. You might not have 100 percent traction but at least you can get the car hooked and pointed in one direction.”

This weekend, as part of Donath Motor Worx CNY Speedweek for the Lucas Oil Empire Super Sprints (ESS), Wight will be pulling double-duty in his big-block and sprint car three days in a row – Friday at Brewerton, Saturday at Fulton and Sunday at Utica-Rome with the Super DIRTcar series.

“We’ve had some really good runs there [Utica] in both sprints and mods,” he said. “To go there for a series race, I think we can, hopefully, give Matt [Sheppard] a run for his money.”

Matt Hulsizer came from a fourth starting spot to finish second on what he says was a tough racing surface.

“The track was challenging on its own, so we just came out here with a straight racecar and a second-place is not too bad,” he said.

Hulsizer made his moves on the bottom of the track, as that seemed to be the line to run for the duration of the race.

“The bottom was really good down in three and four – if you could get in goo and hit your marks, it was real good down there,” he said. “The outside was a little too rough to make it too much passing. Luckily we started up front and stayed there.”

Jimmy Phelps rounded out the top three with what he said was a so-so car.

“Just too tight, still. We need to free up so I can rotate without having to pinch the car off and carry speed,” he said.

Phelps was also a bit concerned about the track surface with all of the changes the rain brought.

“The top lane was halfway up the bottom lane,” Phelps commented. “I understand their thoughts, and they got it in, but it wasn’t much of a racetrack.”

Heavy rain, which finally ceased around 4:30 p.m., pushed the event’s start time back significantly and near flooded the entire track. But the track surface crews worked non-stop until well after 8 p.m., packing in a very tacky surface, to prepare for 30 ESS sprint cars and 21 Tracey Road Equipment big-block Modifieds…

The pit area and parking lots could best be described as mud pits, making it somewhat difficult for push trucks and other off-road vehicles to get the ESS cars on and off the track.

The final features were not completed until after 1 a.m., a rather unusual end time for Brewerton.