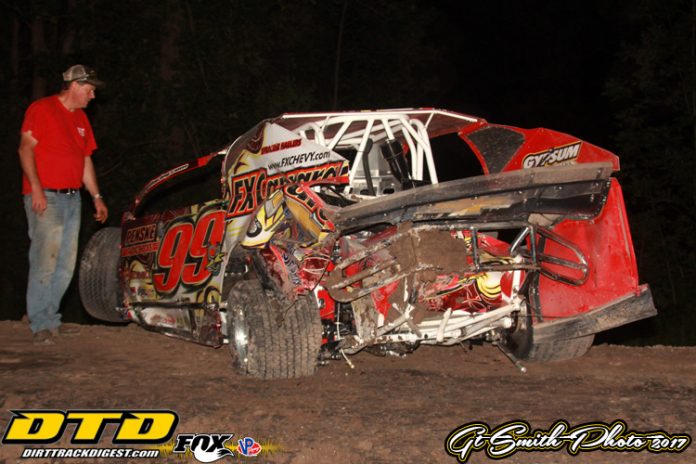 Gotta love Tim Fuller as he finished third in the Super DIRTcar Series race at Utica-Rome and said, “I know who won the race, but who won the fight.”

It was like the good ole days for a brief moment on Sunday night, but sadly “the fight” overshadowed what was a great event for Bill and Kim Shea.

It’s almost old news by now as Matt Sheppard dragged Larry Wight from his wrecked race car, put him in a headlock and wrestled on the ground. The end result is that DIRTcar officials quickly, and I do mean quickly, made a determination to sit Matt for the next two SDS races, fine him, take points away and give him what to him will be a meaningless suspension as it goes from July 3-10. Matt doesn’t run any sanctioned races during that time. The only sanctioned track he runs regularly is Utica and the Mods are off this week as the big-blocks head to Cornwall. He won’t be hampered by running Outlaw or Canandaigua.

Prior to the accident both the 9s and 99L had pitted and were working their way up from deep in the pack. Attrition was low so there was almost a full field out there.


Sheppard had a right front flat on lap 38. It might have happened as he looked to have made contact with a lapped car. He restarted 25th and was inside the top ten with 25 to go.

Fans were having quite a bit of fun watching Larry and Matt running side-by-side lap after lap. It was a tremendous wheel to wheel battle, but on the 74th lap that duel became a duel of another type.

Well, I reached out to the driver of the car that was directly behind the duo and Gary Tompkins commented freely on what he saw from the cockpit.

He blamed absolutely no one.

Gary explained what he saw as he said, “It looked like to me it was just a racing incident. Larry had a run on Matt, but hadn’t quite gotten up alongside of Matt enough for Matt to see him. He needed to be a little father forward for that to happen. Larry was sort of in no man’s land at that point. Does he lift or stay in it? If he would’ve gotten next to Matt there then there was a good chance he could’ve passed him coming out of four. So I could see why he took the gamble. Matt had been slowly moving up the track. There was no sudden movement and unfortunately for them Matt moved up enough where it pinched Larry into the wall which then spun Matt sideways facing the wall while Larry was catapulted into the air. It’s unfortunate what happened, but even more unfortunate what happened after that.”

The “after that” is something you see regularly at Bowman-Gray Stadium down South or in the old days of the support classes as rural American tracks.

It wasn’t something to be expected among the elite of the Super DIRTcar Series Tour, much less the champion.

From my vantage point I saw Matt rush out of the car and race toward Wight’s crippled machine. I didn’t personally witness the dragging out as, like most fans, I was probably a length of a football field away. However, the video provided me with the conclusion of the tussle.

Reflecting on the two it is no secret there is a dislike between Matt and the Wight family. Larry’s driving style is not always appreciated by some other drivers or fans.

For Sheppard it looked like a night to celebrate. He drew the pole as numerous folks groaned when his niece picked number one. It wasn’t that they didn’t like Matt as those groans were due to the fact that, other than Stewart Friesen, this guy is dominant at Utica-Rome and recently passed the legendary Richie Evans in the all time feature win list.

Everyone figured the 9s on the pole would be a 100 lap run to victory.

I would also think Matt would be confident, but things didn’t work out the way many fans figured they would. He got caught up with a lapped car and the right front went down and when he returned he started back in 25th.  When he got back to the top ten that seemed to be where the progress ended. Then there was that lap after lap battle with Wight that probably didn’t help at all. Sheppard had to be extremely frustrated and I think in his mind he has seen too much of Larry.

A few weeks ago at the SDS show at Outlaw Speedway Matt complained that Larry had come across his front end which resulted in a 360 degree but kept going spin for Sheppard. He came back to finish second, but voiced his displeasure in the post race interview.

Rivalries are good for auto racing, but hopefully they could be healthy rivalries.

Sadly, I think the old days of what happens on the race track happens and then the guys all going out for a beer are over. In today’s world these drivers are like elephants who “never forget”.

As one driver told me recently, “You don’t get even that night. You keep it in the back of your mind and one day, one day, you will get your chance (No not Larry or Matt).”

However, for fans there have been classic rivalries over the years such as Richie Evans- Jerry Cook, Donnie Wetmore-Roger Phelps, Toby Tobias-Kenny Brightbill and this Sheppard-Wight thing could go on for another 25 years.

Frustration and emotions are a major part of sports, but hopefully this one doesn’t cost the defending SDS champion the ’17 title. He will have his work cut out for him when he returns from his two race series suspension for Weedsport (unless either Airborne or Cornwall get rained out). However, he will also be in a situation that no driver likes to be in. His moving back up in the standings will also need other drivers to have mechanical problems and “DNF’s”.

Claude Hutchings Jr. and Beth Bellinger are both running a full season of big-block action this year and the necessity of track time is important.

Both qualified for the SDS race and were logging their laps with many coming while running together in the first 72 laps.

However, suddenly on the 74th lap Hutchings car was launched and Bellinger went around after contact. The 84jr was destroyed as the front end in front of the fire wall was hanging.

Fortunately, both were okay.

Beth said, “I’m not sure what happened. I talked to Claude after the race and we shook hands. We had fun racing together. He said someone got into the back of him. My guess is that it was the leader. He got pushed into me and our wheels hit. Then all heck broke loose. I really felt good out there in the consi and can’t wait for the rest of the season. I feel like every race I set a goal and just keep improving. My goal on Sunday was to qualify and I did.”

Friesen Got This Thing Nailed

It was the second New Yorker win for Friesen with the last coming in 2007.

In chalking up 54 Utica-Rome feature wins the all-time leader has visited victory lane in 12 different seasons.

Stewart always speaks his mind and had a great amount of his success on the slick surface with American Racers. He commented, “I loved this place when they ran American Racers and since they switched to Hoosiers it has been different.”

In getting his first SDS win of the year he noted, “The car was Wow tonight. To get the first win here is special. It is the toughest track on the circuit and I love this place.”

Many times a support class winner is racing in front of family and friends when the last feature hit the track and the Modified haulers are headed out to Route 5.

However, that was not totally the case on Sunday as fireworks were on tap.

Before heading to victory lane he ran to the golf car and hugged his dad.

He was choking up during the interview as you could tell this meant everything for the former Pro Stock driver.

Holding his daughter there was a proud and happy man who celebrated the Fourth of July a couple days earlier than the official holiday.

To make it all that much sweeter when I put the microphone and asked his daughter who her favorite driver was she shouted, “My Papa”.

Moments I love about announcing.

Mike Mahaney came in as the leader with Danny Varin and Mark Smith right behind.

Mahaney had been consistent all week, but on the third lap of the main smoke poured out from the engine compartment.

On lap eight third place Smith had his wing collapse and that was it for him.

So in the end a guy who just a couple of years ago was just tinkering with Sprint Cars captured the Speed Week crown.

Danny Varin is a shoe and a versatile one at that.

38 Modifieds, 36 Sprints and 27 Sportsman were pit-side on Sunday night…

Sportsman driver Tim Falter hasn’t driven a race car since a Small Block Super at Oswego in 2000. His kids graduated from college and he’s back to go racing again. He plans on running Can-Am and Utica-Rome…

Larry Wight had a tough weekend as he lost a piston in his Sprint on Saturday night while the Mod had a rear end go in the heat and a flat tire in the main at Fulton Speedway. He had planned on the Sprint car for UR, but it was a no go after losing the motor…

Former URC champ Mike Hagenbottom really got a baptism under fire as he tested five new surfaces this past week. He found himself upside down coming out of the fourth turn in his heat on Sunday. The driver was okay…

Not only did Beth Bellinger and Claude Hutchings Jr. run together in the main, but in the consi the duo battled race long for third place with the 84jr edging out the 1s…

Third place finishing Matt Tanner might have had something for the 45 if it had been five laps longer. He was coming…

Pat Ward was a solid second in the SDS 100 lapper. He took the lead from Billy Decker on the 41st lap restart, but on the 55th lap restart eventual winner Friesen got the run and ran away…

Brett Hearn smoking heavily at the end, but finished sixth…

Seventh place Gary Tomkins had a decent run, but noted “I’ve never raced on a track as dark at that one.”…

Alan Johnson pitted on lap 55 and came back for ninth…

Matt Billings is a former Mod driver who has made a tremendous adjustment to Sprints in a short time. He started 18th and came home sixth…

Among some different Sportsman drivers in the pits were Scott Duell, Brian Pessolano, Andrew Wren, Carl Inman and Falter…

Something a little different this week at Utica-Rome with the King of Dirt 358 Modified Series plus Sportsman, Pro Stocks and finally the Rookie Sportsman…

That’s it for this time around. Any news, comments etc. send along to foley395@hotmail.com