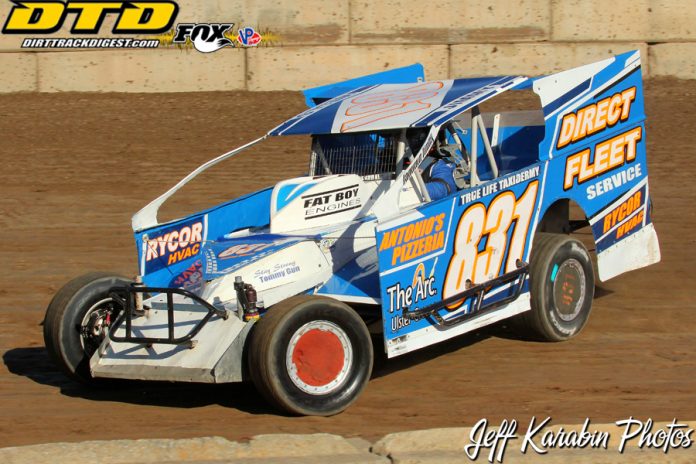 That’s about how much of the final lap that Jimmy Wells didn’t lead in the ‘Battle of the Bullring’ 50-lap feature on Monday night at the Accord Speedway. Wells got the top spot on a lap four restart and looked like he was going to produce the upset of all upsets, but it was not to be on this night. One hiccup in traffic on the last circuit was enough for Anthony Perrego to sneak by him to score the win. Wells, although disappointed, took the second in stride.

“It’s a good feeling to finish second but it sucks to lose it on the last lap coming to the checkered,” said Wells. “It is my first year in Modifieds, so I’m happy with it.”

Wells just couldn’t get through traffic the way he needed to. And for its part, traffic wasn’t making things easy on the youngster. He beat the back bumper of several drivers as he tried to maneuver his way through. Most remained in their line forcing Wells to get out of his comfort zone to make passes.


“Lapped traffic sucked once again like it always does here,” he said. “They just wouldn’t move.”

On positive note, Wells knows his car is where it needs to be.  The had a crash in the week leading up to the event that did heavy damage to his No. 831. Repairs were made and the car was on point.

“This is really good because we got in a bad wreck here a week ago and we thought the car was junk,” commented Wells. “We went to work and straightened and the car out. It was pretty good tonight.”

Decker Battled for All He Could Get

Billy Decker was sneaky fast in Monday’s feature. The Unadilla, N.Y., driver really got rolling late in the affair, but by that point it was too little, too late. Without the help of a caution he wasn’t able to get up front to challenge for a top two finish.

“We don’t have a ton of laps here at Accord,” he mentioned. “We had a lot of fun. I was happy to see long green there. I think our car got better and better. I think them guys were gone by the time we got to third. We still had some fun.”

One of the best battles of the race was between Decker and Rob Rowe. The two stayed side-by-side for give or take 25 laps with Decker eventually getting the better of him.

“We had a wrestling match for 20 laps,” stated Decker. “It was a lot of fun racing him. He left me a lane and I was up against him a couple time. It was a lot of fun. I couldn’t clear him. I think if I could have cleared him a little sooner I would have been better off.”

No Disappointment in Rowe Rob Rowe doesn’t often get to mix it up with the likes of some of the best in the business like he did on Monday night at Accord. As mentioned above, the Wallkill, N.Y., driver spent a good portion of the race battling with perennial front-runner Decker.

“I heard him there,” he said of Decker. “It was really cool. I feel like I just slipped up a mile an hour too fast and he got underneath me. I think we were pretty even.”

Rowe is a part-time racer who has spent many occasions, as he put it, “watching from the stands with his car on the trailer.” Monday night’s fourth place finish was special. It was his best run in a Brett Deyo promoted event and it came during a season where he’s made only a handful of starts because of weather and other issues.

“This means a lot to me and everybody here because I used to come here a lot when I first started racing,” mentioned Rowe. “When we running here regularly we would over drive the car. We were just trying too hard. I was not racing with my head but with everything else.”

Rowe was utilizing a HigFab car with a homebuilt engine put together by Rich Bunora. He credited a visit to Accord a couple of weeks ago with having things in order on this night. Adjustments were made, notes were kept and the end result was a top five in a Short Track Super Series event.

“Three weeks ago I came here for the first time this year and we were loose,” stated Rowe. “We made some changes and we got 11th from last. I was happy with that.” Jerry Higbie marched forward early from 12th up the fifth spot before hitting the proverbial wall. The Newburg, N.Y., driver just couldn’t make any headway from there. He went with a harder tire which the team prepared expecting some cautions to slow the pace. Those cautions never came and he simply ran out of momentum late.

“I went with a 50 (compound) tire which is pretty hard and I siped the bejesus out of it thinking there was going to be some yellows,” commented Higbie. “There always is three or four traditionally, but there was none. I think from lap 10 to lap 30 I probably had the fastest car. I knew it was going to go away. I was racing hard with Decker and he was racing hard with Rowe, none of us could go anywhere really, but we were all good. I think I wasted my tire at that point. Basically from 35 to 50 I was hanging on.”

J.R. Hurlburt had his best run in several seasons with the Short Track Super Series in the Battle of the Bullring. The Otego, N.Y., driver finished sixth behind some heavy hitters with his Jamie and Denise Page owned Bicknell. Like Rowe, the part-time racer was mixing it up with Decker and Higbie for several laps throughout the 50-lap distance.

“It feels great to run with these guys, to keep up with them and be out there battling with them,” mentioned Hurlburt. “Me, Higbie and Decker, once we got mellowed out and everyone got some heat in the tires we all kind of maintained. I was starting to catch them toward end, but we got into lapped traffic and I just held my own position. I was happy where I finished.”

Hurlburt committed to run the entire northern portion of the series during the off-season when he teamed up with the former Afton Motorsports Park promoters. They hope this is the springboard to more good runs in the future for the new team.

“Jamie and Denise (Page) put this this car together for me and it’s a heck of a good piece,” he said. “We sold the Sprint Car so we could by this motor. Everything seems to be coming together now. We are having a good time. I hope this gets thing going for us.” Danny Creeden went off on the hook during his heat race with frontend damage. The Accord Speedway regular then qualified via the consi before finishing an uneventful 19th…

Matt DeLorenzo was forced to use a provisional starting spot to make the field. The Cropseyville, N.Y., driver got spun in his heat which forced him to the pits for a new left rear tire. He struggled upon his return and missed qualifying. In the consolation he missed out by two spots forcing him to take the provisional…

Ricci Jr’s day ended at the halfway point of the main-event. He was running in the second position challenging for the lead only to pull into the infield. A large puddle of fluid amassed under the car as he sat waiting for the conclusion of the 50-lap feature. He was pushed to the pits…