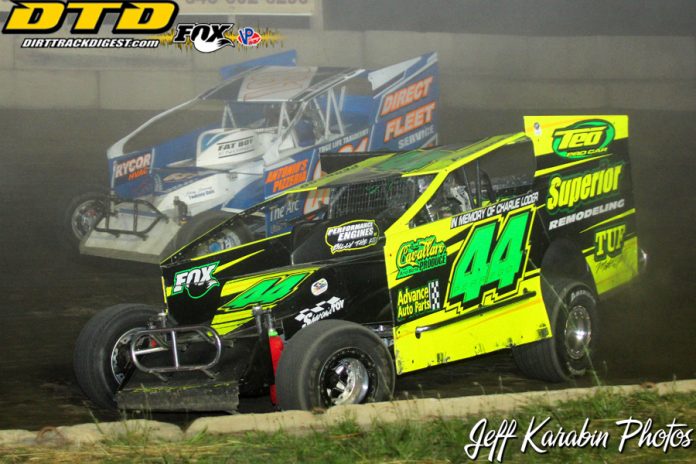 It’s not how many laps you lead, but what lap you lead that matters. That was certainly the case on Monday night for Anthony Perrego in the fifth edition of the ‘Battle of the Bullring’ at the Accord Speedway. The Walden, N.Y., driver only led one lap, the last and most important one as he scored the $5,000 payday at his home track making him the only two-time winner of the event.

Perrego started the race on the front row but watched as Rob Rowe raced to the lead at the green with Jimmy Wells and Rich Ricci Jr. shooting by him as well as he tried the top of the speedway. The lesson learned on the opening lap wasn’t forgotten as Perrego never wavered off the bottom of the speedway again.

On lap four the only caution of the race gave everyone a double-file restart. Perrego did what he had to do to get as many spots as he could at the green. He was able to move up to third as Wells and Ricci paced the field at the front. Eventually Ricci dropped out with mechanical issues leaving only Wells in his path. Without the aid of a caution, traffic became a series issue for Wells as the race got within a handful of laps to go. The youngster tried to be patient and work his way through, but that patience ran thin as the lapped cars refused to deviate from there line allowing Perrego to close in on Wells. Then, on the last lap, Wells made one mistake and Perrego pounced to take the lead and the win.


“The lapped traffic slowed the pace a pretty good amount and I got a good run through the middle,” commented Perrego. “The car was able to turn through the center very well. I got to the bottom and once the gap opened up I knew we were going to have a shot at him. I used him up a little bit off of four, but you are coming for win.”

The win was a much needed pick me up for Perrego as he’s had his fair share of struggles,  including problems with his big-block efforts at the Orange County Fair Speedway. Due to the issues, the team was forced to head south to compete at Grandvew Speedway with his small-block team. Monday, everyone got to celebrate the win together.

“The big-block thing at Middletown, we were almost leading the points and lost two motors, but racing this car makes up for it,” stated Perrego. “I feel bad for Bill (Pascual) and his team. They are working just as hard as we do here. It’s tough on his part but he’s here tonight and gets to enjoy this one too.”

Perrego waited for just the right opportunity to drive around Wells. He had raced up to the back bumper with his Performance Engines by Billy the Kid powered Teo, but he didn’t show his hand until the final corner. He had two or three other times he could have stuck the nose under Wells for the lead but he waited and it paid dividends.

“You don’t want to poke a nose in there and let him start protecting,” mentioned Perrego. “He just spin the wheels off of two, that opened it up and it was all it took. In one and two the lapped car wasn’t doing him any justice. He was on the outside of him. I think he just drove in a little deep. If he followed him around the bottom no one is going anywhere, but he got in there a little hard. It’s better to be lucky and good.”

On Monday Perrego was both lucky but more importantly good.