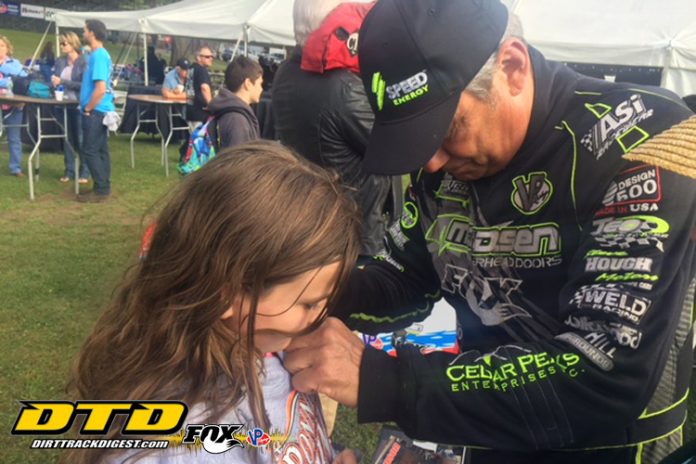 After a week of waiting after last Sunday’s rainout, Glen Ridge Motorsports Park under the promotion of Mike Parillo and Ray Sefrin opened to pits jammed with 92 racers in six division and stands full of cheering fans.  It was truly a home run for the little track on the hill and their efforts certainly paid off.  Mike Parillo had one word, amazing and Ray said he was just real happy!

Winner on Sunday of the Crate Modifieds 30-lap feature was Tim Hartman, Jr. but Hartman’s car owner and co-promoter at The Ridge, Mike Parillo decided that it’s okay for his car to win but he thought the $1100 winner’s share of the purse should go to someone else in the finishing field.  On Sunday that lucky driver was Rick Coons who actually finished 15th in the 25 car field.  Numbers were placed on the front stretch wall and Tim Hartman, Jr. drew the lucky finishing spot.  Hartman got the winner’s trophy. he No. 9x of Jim Introne, Jr.  It was his wife, Sarah and his cousin Michele from Rochester who had made the trip to see Jim run.  They were both thrilled with his heat win.  In the feature Introne was involved in a mishap and had to settle for a 20th place finish.


This past Tuesday we headed to Brett Hearn’s Big Show 9 a very popular show and one that stands out as one of the shows that fans start talking about early in the season.  All race fans certainly know the Brett Hearn name and his outstanding record.  Over the years we’ve seen shows that are great the first time but the following attempts couldn’t quite match the success of the original.  Looking at the Big Show we have seen that Brett and the people he surrounds himself with are always looking to improve their program.  In the beginning the Big Show was held at Brett’s first home track, Orange County and then after a few years moved to the Great Race Place, Albany Saratoga Speedway.  Some of the comments we heard about the show from fans that made the show more enjoyable for them was the addition to the sound system, playing of music and bringing in the guest announcer,  Shane Andrews to work with track announcer, Dan Martin.

On this night Brett wore two hats, one as promoter and the other as driver.  Early in the evening we saw Brett taking time from his already busy schedule to sign autographs for his loyal fans and we snapped this photo of a young fan Ella who was thrilled to have her photo taken with her favorite driver. On the way to the pit area we ran into two people that we feel may be the most important in this Brett Hearn deal.  We spoke with his parents, Kay and Gordon who are always on hand as often as possible to support the efforts of their son, Brett but we were quickly reminded that Brett is only one of their sons, the other, Bobby Hearn is a successful fabricator and car builder who has helped the career of Brett and many other racers from his TEO Pro car shop.  As parents it must be so rewarding to watch what their two sons have accomplished in their lives. We have met many members of racing families over the years and it has become a favorite part of the sport for us.  Tuesday we also ran into Brooke and Sue Hearn.  The first thing we asked Brooke was, where are the cookies?  When she was younger, Brooke baked cookies to sell at the races and they became very popular with fans.  She now lives in Las Vegas and it’s hard to find time to bake cookies.

A word about the racing on Tuesday; when you have 45 Modifieds and 53 Sportsman you can’t ask for anything more and fans were treated to racing by the best drivers in the business.  We personally liked that the Sportsman field was divided into two features, giving all drivers a chance to race in a feature.  Winner of the Modified event was Tim McCreadie who celebrated in victory lane.  Tim divides his time between World of Outlaw Late Models and DIRTcar Modifieds and he is always a welcome addition to area Modified shows.

With Friday night’s rain out at Albany Saratoga Chris Grady is currently looking to reschedule the party for his father and vintage photo sale.

Hopefully this weekend Mother Nature will be kinder to the Capital District dirt tracks.  Until next week please send all news and/or comments to biittig@yahoo.com