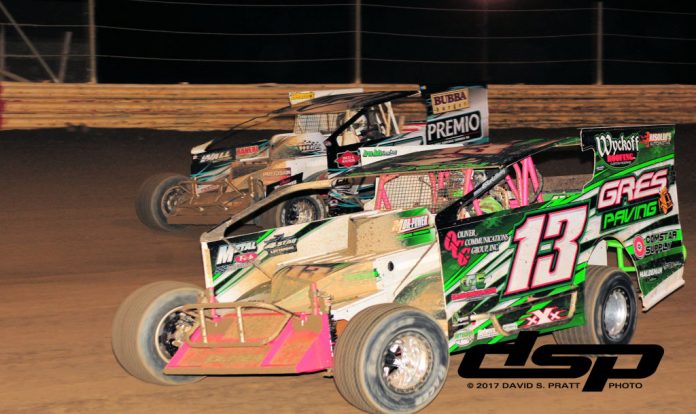 Sorry to say folks, I was really hoping after we got through the month of June things would change as we turned the calendar to July but unfortunately it did not. July started out just as June ended with rain once again dominating the win column.

This Friday July 7th the speedway will present the annual 37th running of the “George Stephenson” Memorial race for the 358 Modifieds. The 30 lap feature event will pay a cool $4000 to the winner. Also on the card for the night will be the Sportsman Modifieds with their feature paying $1000 to win along with the Street Stocks and the Roadrunners. The speedway will host a fireworks display during intermission for the crowd’s enjoyment.
Grandview Speedway 7/01/17 – The speedway lost yet another Saturday night to rain as heavy rains hit the speedway in the late afternoon hours to force the track to cancel.
Next Saturday July 8th the Sportsman will run their rained out feature from June 24th along with their regularly scheduled night’s event. The Late Models will run their annual “Firecracker 40” lap feature as well. The TP Trailers Modifieds will also run their full card of events as well on the night.

The Modified feature that was rained out on June 24th will now be run as part of the July 15th show.


New Egypt Speedway 7/01/17 – After suffering rainout after rainout this season the management of the New Egypt Speedway decided to do what they can to get a show in this past Saturday night. With rain all around the area, the track crew prepared the racing surface in case the rains came which they did in the early evening. Once the storms had cleared the area the track crew went to work to get the track ready for action.

Due to the delay, the track thought it would be best to forego the heats and just run warm-ups then onto the features. It proved to be the right decision due to the lateness of the hour.

And for the second time in as many Saturday night shows we had a new winner emerge at the end of the night. Standing in victory lane for the first time in his career was PJ Oliver after winning the “Firecracker 40” lap feature event.

Oliver, who has come close a couple of times this season to that elusive first victory, finally was able to pull it off. Oliver who started near the front quickly grabbed second from Doug Ostwald and then set his sights on catching the #19 of Rocco Infante. Oliver and Infante would battle it out each and every lap but with the track being so fast and heavy from all the earlier moisture you knew that passing would be difficult. Oliver’s break came on lap 21 when Infante made a mistake and Oliver was there to pounce on it and take the lead. But Infante wasn’t done yet and went back by Oliver three laps later when Oliver jumped the cushion. Oliver quickly rebounded and three laps later was able to slip by Infante and be back on top once again.

While all this was going on up front points leader Billy Pauch Jr was making his way to the front and looking to challenge for another win to pad his points lead. Pauch Jr raced into second after a lap 37 restart and was on the march after Oliver but Oliver was up to the task on this night and was able to hold off Pauch Jr through another restart to grab the big win.

I caught up the winning driver from Saturday night PJ Oliver Monday at Bridgeport while preparing his big block modified for the night’s action to ask him about his big win a couple of days back.

“Yeah, this feels really good to finally get the first win under your belt. We’ve been really struggling the last couple of years with either mechanical problems or getting caught up in wrecks or just some general bad luck. Whatever it was it just seemed to always get us but Saturday night it finally all came together for us. It all worked for us after the rain came through and we waited it out. The track was fast and we were fast”

“You know we’ve been getting faster at New Egypt the past few weeks. We now have a third, a second and now a first pretty much all in a row now. We’ve been fast and we keep getting it dialed in more and more and hopefully we can be in contention the rest of the year. We just got to keep those mechanical gremlins from getting us and work on a few more things and we should be okay. Running these cars is a lot of trial and error and we keep finding things that work on these cars to make it better. Hopefully we can keep it running good week by week and keep it in once piece and see what we can get.”

NJ/PA Mod News N Notes:
Carburetor issues plagued the Petruska & Sons #66 of Ryan Godown on Saturday night at New Egypt leaving the team with a disappointing 13th place finish. Definitely not the result they were looking for…

Hats off to Joey Liquori and his team at New Egypt Speedway for persevering and getting Saturday night’s races in the books. Most tracks would have thrown in the towel and cancelled but they decided to stick it out and get the show in for the racers and the fans…

DRIVER OF THE WEEK: This week’s honors go to PJ Oliver for winning his first ever career modified feature! Great job by PJ Oliver and his crew on their accomplishment!
As always, I can be reached for any comments or questions at dirtracefan25@hotmal.com or on Twitter @dirtracefan25