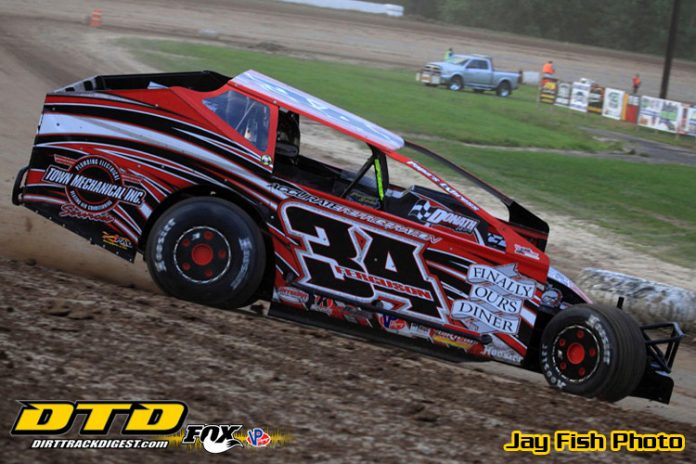 He didn’t win Friday night’s 35-lap feature at the Brewerton Speedway, but Andrew Ferguson put on a show as he battled the entire distance with eventual winner Jim Witko. The pair thrilled the crowd as they each battled for that first win at the ‘D-Shaped Dirt Demon.’

Ferguson was still running high on adrenaline after hopping out his Donath Motor Worx powered Bicknell. He had nothing but praise for his compatriot after race.

Ferguson indicated that his family owned and run operation purchased a new engine combination which may be what they’ve been missing to be a consistent front runner in the Modified division. He was quick to thank his father, family, crew and sponsors for helping him put everything together after they spent the entire holiday week getting the car together and ready for action on Friday night. It obviously paid dividends already.


“We put the 18 degree motor in this car,” said Ferguson. “We spent every dollar we had to buy it so we could compete with these guys. Tonight was the first night on it. What a difference! I can’t believe what I’ve been missing just in smoothness and power.”

Witko was glued to the bottom while Ferguson powered his No. 34 around the extreme outside of the race track. Ferguson beat what cushion was on the top of the tricky track to hang with Witko.

“I struggled down here in one,” mentioned Ferguson. “I had to keep telling myself to back the corner up because there was a big patch of black there and you’d slide up in and then you were out of the brown into the throw away stuff. This car was phenomenal in three and four. The track was beautiful tonight.”

Multiple times it looked like Ferguson was going to be able to wrangle the lead away from Witko for good, but each time he fought right back to regain the the top spot. Ferguson’s car took a couple laps to get rolling after a restart, which there were many. To him, it seemed like each time he got back to Witko the race slowed again for a caution.

“I actually think I had him at the line that last time but we go back a lap,” he said. “I tried to stay up there. I was nervous with those yellows. It seemed like every time I’d get the thing rolling the yellow would come out. It seemed to play out like that every time.”

Ferguson got one last shot with only a handful of laps remaining. He debated what to do briefly in his mind before going to what he knew would work, that is the outside lane around the speedway. It wasn’t enough as he came up just short. He had nothing to left to give or hang his head about.

“I was confused with what to do on that last restart,” commented Ferguson. “He was getting a good run off the bottom. We were starting single file. I didn’t know if I should chance running in on the bottom with him and try to sneak around him. I went to the top and gave him all I had. I couldn’t push the gas pedal through the floorboard any more coming to the line. I don’t even know if he beat me by a full car. It was an awesome. This makes it all worth it. It gets rid of the bad ones (finishes). It gets you back in, hook, line and sinker.”

Ward is a Road Warrior

Pat Ward is as old school as they come. The veteran driver from Genoa, N.Y., competed on Thursday night at the Airborne Park Speedway with the Super DIRTcar Series. He made the nearly five hour trek home from the Plattsburgh, N.Y., facility by driving the hauler himself. He was then up early working on the car to get ready for Brewerton action on Friday.

“We got to bed at 430am this morning,” stated Ward. “We were back up working at seven in the morning. You beat the shit out of the car the night before. The only way you are going to finish these races is by working on the car all day. It’s tough sledding I’ll say that.”

Ward indicated that his car was off in the feature. He continued his solid outings as he’s been consistently in the top five the last few races his Gypsum Racing team has entered. He had a great battle with Max McLaughlin before settling for third in the final rundown. He feels like he’s on the cusp of even better finishes.

“I had to the car way too tight,” he said. “Down the straightaways the left front was way up in air. I thought it would get slippery. Good job by Jim Witko. Him and Barb work, work work. I’m glad to see him get the win. We’ve been running good, not quite as fast as Larry (Wight), but the Gypsum car is solid and steady. I can’t help but think a win is right around the corner.”

Chris Hile’s car was outfitted with a powerplant that was once a stout Decker piece. The engine was the same one that powered Decker to the fastest time ever to be turned on the ‘Moody Mile.’ On this night Hile used it to propel him to a seventh place finish…

Gary Tomkins was an early exit from Friday’s 35-lap feature after experiencing brake issues on his No. 84…

Rob Bellinger somehow got a rock wedged between the caliper and the wheel making his car difficult to handle.