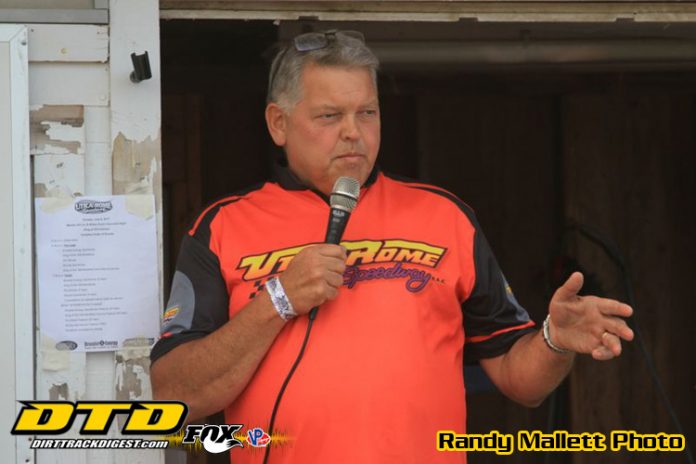 One thing I can say about the King of Dirt Series…they don’t disappoint.

The King of Dirt (when they are point shows) has brought banner fields of Sportsman and Pro Stocks to the Utica-Rome Speedway.

Well, UR owner Bill Shea is quite supportive of small-blocks and he stood before the 43 gathered drivers on Sunday night and thanked them for coming to support this show.

Small-blocks, which use to be a common in Central New York, aren’t anymore. In order to gather a field teams must comment to drive a distance to compete at Utica-Rome and they did so from the West, North, and East on Sunday night. It was hoped maybe 30 small-blocks might find their way to the Route 5 facility, but they just kept pouring in.


And there was a diversified field of cars and drivers. It was like the old time 358 small-block DIRTcar Series.

Toss in 27 Sportsman, 10 Pro Stocks and five Rookies and it was a decent and efficient night had fans out before 10:30 p.m.

Marc Johnson was quick time with a 19.143 and right behind him was Rudolph with a 19.239. Completing the top five were Mike Mahaney, Alan Johnson and Anthony Perrego while sixth through ten were RJ, Chad Phelps (in Andy Noto’s car), Elmo Reckner, Ryan Susice and Neil Stratton.

Heats had 10 or 11 cars with four qualifying and three redrawing so it made competition intense.

Marc Johnson and Rudolph won the first two heats while Mahaney and Alan Johnson captured the other two.

In the third heat Steve Way and Chad Phelps were in qualifying spots and when the 27s went off the first turn. Officials sent Phelps to the back for contact and both had to scramble for a qualifying spot as there were just three laps left in the heat. Neither got back up to a top four spot.

Jessey Mueller had a great run in his heat and on a restart went from fourth to second and eventually ended up in a draw in settling for third.

Consi one saw Rob Pitcher and Chad Phelps battling throughout for the final qualifying spot. In the end coming off the fourth on the final lap Phelps got in.

Jack Miller and Alan Barker got the consi wins.

Luck of the draw is critical as the Victoria was just 40 laps. The last driver to draw was Matt DeLorenzo as he had to fight to get the third spot in his heat. He noted he hadn’t been to UR very often and really wasn’t familiar with the place. However, the only orange cone left had the pole so there sat Matty D.

Ryan Susice, who was in a Sprint car at UR the week before, started outside the front row while Jessey Mueller and Erick Rudolph were third and fourth.

Mueller led early, but on the fifth lap restart it was Rudolph and though the Johnson’s, Marc and Alan, were close there was never that ability to get that major momentum need that was needed to take the lead.

Rudolph was excited in victory lane as he said, “This is my first win at Utica-Rome. I found a line that I liked and the car handled perfectly. I am glad there was a full field of cars here to night and it feels good to win this inaugural event.”

Marc, who had fast time, started 11th on the field and noted, “I didn’t like the redraw as I knew I would have my work cut out for me. I gave it the best I had and wanted to go for it, but it just didn’t work.” So he settled for second.

Alan said, “There were a couple of good lines out there tonight and I tried everything that I could, but we faded a bit at the end.”

In regards to running a small-block versus the weekly big block Alan explained, “There was really not any different. You search for the fast lane, but I was able to run the normal line that we run every Sunday night.”

So for the first KOD 358 show it appeared to be an artistic success.

A Different Driver in the 358’s with RDIII

Ron Davis III is recognized for his Sportsman prowess, but there he was in the pits with a Joe Abass Modified that had been outfitted with a W-16 engine combination.

Davis was making his small-block debut and started back in 22nd spot after finishing third in the second consi.

His dad said, “I am very proud of what Ronnie did tonight. The kid did an awesome job with all things considered. In fact he loved it. He said he would run away from Sportsman right now to run one of these things every week.”

He got hooked up with Joe Abass of Extreme Auto Recovery. Ron said, “We’ve been helping Joe with his car and on Wednesday he texted me talking about a W-16 deal in his other car. I thought he was kidding, but he wasn’t. Thursday we went to Bicknell and got on so Barry Knapp and I scrambled to get it in the car for Utica-Rome. It was pretty awesome. A dream come true and Joe said that any small-block race that we can make to go for it. “

It would appear that Ron Davis III will be running a 358 from time to time and after running from 22nd to ninth on Sunday in a class he had never run before he is rarin’ to go.

Sportsman Not Exactly a Warner Benefit

Whenever Rocky Warner shows up he has to be considered a favorite.

Well, he started 14th and by the fifth lap he was fifth.

On a restart shortly thereafter he was second and the win didn’t come easy.

A.J. Filbeck put on one hell of a run as he was passed in traffic when the 1j went low and the A-1 got caught upstairs. However, Filbeck passed him again and they action was tremendous.

However, when it all played out it was Warner with the win, but it was far from easy.

Alan Hodge from Sherburne was in the pits for the first time. A regular at Afton…

Mod driver Dan Humes is not comfortable with Hoosiers so he didn’t know what to expect. The Canaan, Conn., driver had been at the Can Am rain out the night before hoping to get some track time with the Hoosiers…

Pro Stock field down as Glen Ridge is now getting some of the cars that raced regularly at Utica-Rome. Mike Welch got the lead late for the Pro Stock win, but everyone was disappointed with ten cars. Welch felt there would be more next week…

Bobby Varin had to use a past winner’s provisional. He earned that spot years ago when it was a big block, sail panel and much longer win. He laughed earlier in the night when talking to announcers in the pits and asked “I wonder if there is a past winner provisional”. He started 31st and drove a solid race to finish among the top ten…

Mark down August 20 on your must see calendar. The show might be long, but it will be worth it. On tap are the DIRTcar big-block Modifieds, King of Dirt 358 show and KOD Sportsman and Pro Stocks. The Pro Stocks will have two features to get the one that had been rained out earlier this year. This is one of those events that will see plenty of racing…

There are double Modified features next week at Utica-Rome along with the Sportsman, Pro Stocks and Rookies.   Admission price is just $13.  That’s a pretty good deal.

Any news, gossip or comments send along to foley395@hotmail.com