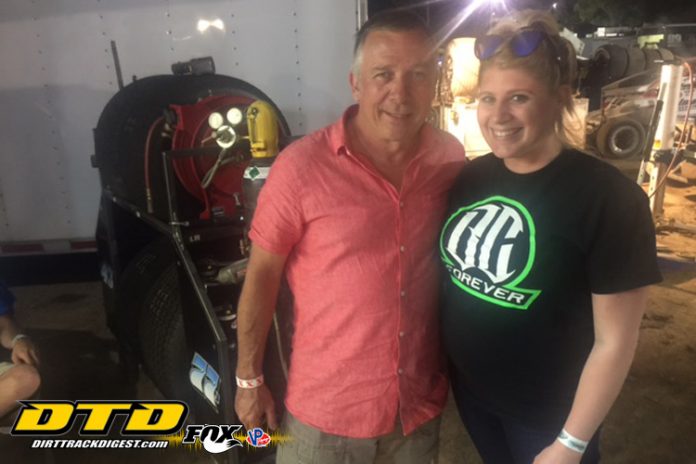 Monday we made the trip down the NYS Thruway to Gary and Donna Palmer’s Accord Speedway for the running of the Battle of the Bullring 5.  The pits were overflowing with a strong field of 40 Modifieds, 60 Sportsman and 15 Slingshots and eager racers set to do battle and looking to get an early start on their Independence Day celebration. At the drivers meeting, Short Track Super Series fueled by VP, promoter, Brett Deyo spoke of the date nearly 25 years ago to the day that the track reopened after being closed for five years.  When looking back through our history records the story emerged about the 1992 July 4th opening that involved a court appearance right up to July 3rd and a Town Board appeal that made it possible for racing to move forward on July 4th.  Only two Modifieds showed up that day and a 6-lap match race resulted in the win going to Cliff Wicks.  After this first event the track moved its racing to Friday nights, a successful move that saw a standing room only crowd with the Modified win going to Doug Tyler, Sr.

When you go to a track week in and week out you sometimes miss the improvements being made.  Each time we get to Accord we know we will find another improvement by the Palmer team.  One we noticed on this trip was the improved track lighting making it better for the racers and the fans.  A special tradition for this race is the chicken barbecue dinner, an added treat at a very reasonable price.  You can’t go many places and get a chicken dinner for just $8.00. We know most of the traveling fans were on hand to see the Modifieds but at times we like to look at the other divisions, that groom our future stars in the sport.  Watching cars lineup for warm ups we spotted a beautiful Slingshot No. 19 and we later found out that it is driven by 14-year-old Samantha Muller of Verbank, near Poughkeepsie.  Samantha will go into the ninth grade this September and has already been racing for a good part of her life.  “I have been in Slingshots the past four years, and before that I raced Quarter Midgets, said Samantha.  She was Slingshot track champion the past two years at Accord.  Her racing schedule consists of racing Friday, Saturday and Sunday all over Pennsylvania.  On Monday she finished second.  Her goal is to move up to Sportsman in the future. Friday night we were back at Albany-Saratoga where the pits were once again full and running over into the parking lot due to the addition of the Patriot Sprints.  We counted 187 total cars and indication that they must be doing something right at the Great Race Place.  The evening started with a shower that cleared off and made for a great night of racing.  While walking through the pits we came across Jeff Trombley who was driving the Warren Allison No. 3A Sprinter.  A few weeks ago, Jeff won in the same car at Utica-Rome.  Most people know of his Modified racing at area tracks and his track championships.  Jeff says that sprint car racing is fun for him and he had lost that in the Modified.  We have watched Jeff since his early Mini Stock days and he has always represented our sport well and we are glad to see him back behind the wheel.

Later in the night we came across a veteran of our sport in the Keith Flach pit area.  Billy Pauch was at the track as a spectator.  Many may remember when Billy drove from New Jersey each Friday to pilot the Ribley and Harpping  er No. 24s Modified.  Pauch has hundreds of wins in both Modifieds and Sprints.  At Albany Saratoga he has seven, the last coming in 1999.  Billy was talking with Chelsea Flach (formerly Miller) who also hails from New Jersey.

Sunday it was the true test of what a regular show would look like at Glen Ridge and on week two car counts were 72 strong.   Racers are still accessing whether to make the trip to The Ridge.  Those that have come are happy with what has been done so far.  Going home with the winners trophy on Sunday at The Ridge were Dave Constantino in Crate Modifieds.  And once again the winning car was owned by one of the co-promoters, this time Ray Sefrin and the winners share was given by lucky draw, this week the fourth place finisher, Jeremy Pitts, who took home $650.  Limited Sportsman winner was Bill August, Pro Stocks, Nick Stone, Sling Shots, Shane Mahieu, POWRI Midgets, Shilo Boice.   The 50/50 drivers share was given to the Crate Modified division by virtue of a draw and it went to the eighth place finisher, Rob Maxan.

This year Ed is keeping a list of Modified winners at tracks across the Northeast (44 of them).  Currently Matt Sheppard leads the pack with 14 wins at four different tracks; Stewart Friesen, Mat Williamson and Erik Rudolph are tied for second with nine each and Larry Wight is third on the list with eight.

At times we have heard people talk of how much promoters make from racing.  We took a rough count and with over 120 cancelations due to weather or wet grounds this season the only way we could compare it was to look at a promoter working all week to prepare for his night of racing and then it rains and he makes nothing.  If you worked all week and come payday your boss said I’m sorry I can’t pay you this week.  What would that do to your bottom line?