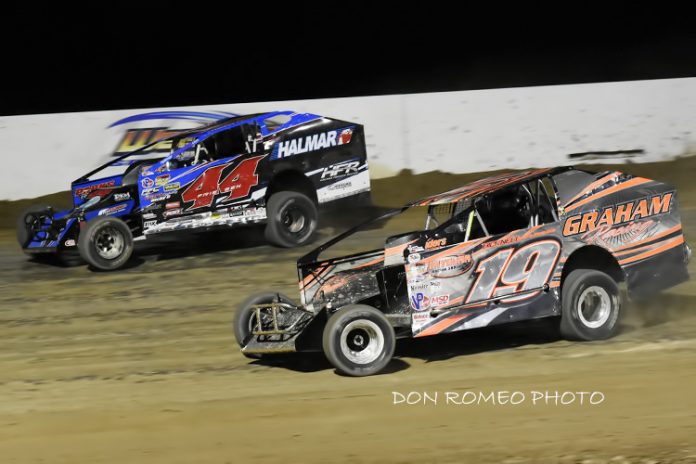 Eight races down in the 2017 Super DIRTcar Series (SDS) tour, and Stewart Friesen has won a quarter of them. Tuesday night at the Weedsport Speedway, Friesen captured his second win in three SDS races by about a quarter car-length over a hard-charging Tim McCreadie.

Right from the drop of the green flag, it was a constant battle with “T-Mac” and Friesen lap after lap. McCreadie showed the way early, moving through lapped traffic with Friesen maintaining an eight-to-ten car-length gap behind him. On lap 45, a caution was thrown for a stopped Brandon Walters in turn two. This would be the last time McCreadie would lead under green.

On the lap 51 restart, McCreadie slid up the racetrack and Friesen dove to the bottom lane, racing McCreadie down the backstretch and taking the lead before getting to turn three. From this point on, the race would stay green until a lap 97 caution was brought out for a stopped Billy Whittaker at the pit entrance in turn three. This stacked up the field, giving McCreadie and third-place Larry Wight, who came from ninth, one last shot at the leader.

The field restarted on lap 97 with Friesen diving into turn one, with McCreadie, Wight and Erick Rudolph following close behind. Peter Britten was able to steal the fifth spot away from Tim Fuller coming out of turn two, landing “Batman” his first SDS top-five of the season.


The white flag was thrown on lap 99, and what a race it was to the finish. McCreadie tried to power around the outside of Friesen in turn four, as he had been attempting all race long, but was unable to hold the line as Friesen slid up in front of him, forcing McCreadie to make a last-second dive back underneath the 44 as they came to the checkered. The desperation attempt was unsuccessful, as Friesen held on for the very hard-fought victory by about a quarter car-length at the stripe.

Friesen was very pleased with the way his car handled throughout the evening, stating he felt fast in time trials but was a bit too tight in his heat race, which he fixed for the feature by loosening the setup a bit more than normal. His move on the backstretch to take the lead away from McCreadie was what set him up to lead the field to a very exciting finish.

“I just wanted to, at least, be somewhat even to hit a little bit of the bite in turn one and be able to cross him up,” Friesen said. “I just got in there to the bite and (McCreadie) had to do the slide-for-life there, but I was able to cross him up and then slide him back in three and four and get up to that cushion. It was pretty wild in three and four – the cushion was awesome.”

This win puts Friesen in fourth on the SDS points list, the highest of any driver to not make all eight races so far. Only 60 points back from leader Larry Wight, Friesen is in good shape to get a shot at the championship at the end of the year in Charlotte, barring any further missed events on the schedule. It’s going to be a busy summer for Friesen, now with the Halmar International team’s ventures into the NASCAR Camping World Truck Series. But he’s doing all he can to make each race.

“You’ve got to do as much as you can at every race. It’s a shame we missed Airborne last week,” he said. “We’re just going to play it day-by-day, race-to-race and go as hard as we can.”

McCreadie helped to put on one of the wildest finishes in recent memory at Weedsport with a second-place finish, chasing after Friesen for the last half of the race and putting a lot of pressure on him.

“We were good, but if I could do it over again, I would’ve started on the outside on the restart,” McCreadie said. “I just got beat into (turn) one. Mid-race (Friesen) was a tic better, at the end I thought we were a little bit better, but, what are you going to do? He did a good job and didn’t make a mistake when I needed him to.”

McCreadie said he didn’t get the restart he wanted, and knew Friesen was going to have a run for him once they hit the start/finish line.

“When we went into one, we had the lead but when I came off for the restart he was still beside me at the flagstand. I pretty much knew I was in trouble,” he said. “I really didn’t mean to slide across the track, I kind-of wanted to park on the bottom and hope for the best but I went in there and jacked it. Honestly, I thought I was going to back into the fence… so to come home second after that is pretty cool.”

The top side seemed to work well for McCreadie, as he was able to stay with Friesen through the last half of the race, even through all the lapped traffic.

“I think we were good enough to run the bottom, when we got to traffic we were able to move around, but it just felt faster up there for me,” he said. “Through three and four (Friesen) was low, so I could follow him all night down there and never make a move. The problem was I needed to make a move and that was the only spot I felt I could have enough time to try something.”

In only his third start this season in a big-block, “T-Mac” has an SDS win at Albany-Saratoga Speedway, a sixth-place finish at Canandaigua Motorsports Park and now a second-place finish Tuesday night at Weedsport. He says he’ll be looking to drive more often this year with the modifieds, so long as his late model schedule allows it.

“Part of this deal is to keep the stuff fresh. Vic’s (Coffey) got two cars he’s working on all week to try and keep running so it’s hard to do too many,” McCreadie said. “We wanted to get out, run a little bit and make some money, hopefully run good. The big shows at the end of the year, if we’re free, we’ll run as many as we can. I’m hoping at the end of the season, 10 (races) would be nice but it might be less, might be more. You never know.

“When I’m free, we’ll run it. That’s kind-of how we figured it out,” he continued. “It works out for me because it gets me an extra paycheck and I love doing this stuff. It’s fun to run hard, put laps in, have a car that’s reactive and fun to drive. It’s what I grew up doing and watching so I’ll do it until they won’t let me anymore.”

Larry Wight climbed the furthest out of all top-five finishers to complete the podium from the ninth starting spot. As usual, Wight was found working the top side of the speedway, at one point passing two cars in two consecutive laps to blast into the top five early on. From there on out, he continued to put pressure on the 44 and 39.

“We were right on them (Friesen and McCreadie), I just needed one of them to make a big enough mistake to give us an opportunity but you’re not going to see either one of them make a mistake,” Wight explained. “If they do, it’s going to be a couple tenths, not half a second.

“We were just a bit too tight to be able to run the bottom or the middle and carry any kind of speed, so we had to go up and bang on the cushion most of the race,” he continued. “We were able to keep everyone else behind us and keep the leaders in sight so we were still fast.”

Erick Rudolph crossed the line in the fourth spot with what he said was a fast car right out of the gate. He stayed in the top-five the whole night, including all practice and qualifying events, and was satisfied with a fourth-place finish.

“I was handcuffed to the bottom, just because that’s the only place the car really wanted to be,” Rudolph said. “But a top-five finish in this series is nothing to be ashamed of.”

Battling with Peter Britten and Tim Fuller for most of the race, Rudolph held his own and showed his ability to run at the front of the pack.

“I had some good battles with them, and had a lot of fun,” he said. “At the end, we almost had Larry there with less than a few to go. He was just a bit better than us, so were the leaders. We were a fourth-place car.”

Peter Britten rounded out the top five, sneaking by Tim Fuller on the lap 97 restart to claim the fifth spot.

“I knew I’d be pulling Fuller in there toward the end too,” Britten said. “I figured if I could just get underneath him, I would have a shot at getting by him. He just got in a little too high in turn one and I was able to get underneath him to his door, and once I got inside, it was just a matter of making the pass.

“We had a really good racecar. We were a little tight at the start of the race, which might have contributed a little bit to slipping back a couple spots,” he continued. “But these 100-lap races, you’ve got to be set up to go to the front at the end.”

The track was in tip-top shape for both the Modified and Sportsman classes, as it was very hot during the day but humid in through the night, which made for three solid grooves of racing. The bottom and middle lanes slicked off toward feature time, but the top line held up and proved to be quite useful for passing cars…

The event begins a grueling next event for the Super DIRTcar Series drivers as they head west to Ohio to Eldora Speedway for two events on July 18 and 19.  They then hit the Sharon Speedway on July 20 before heading home for their weekly action before heading north of the border to Quebec for a pair of events on Monday and Tuesday July 24 and 25.