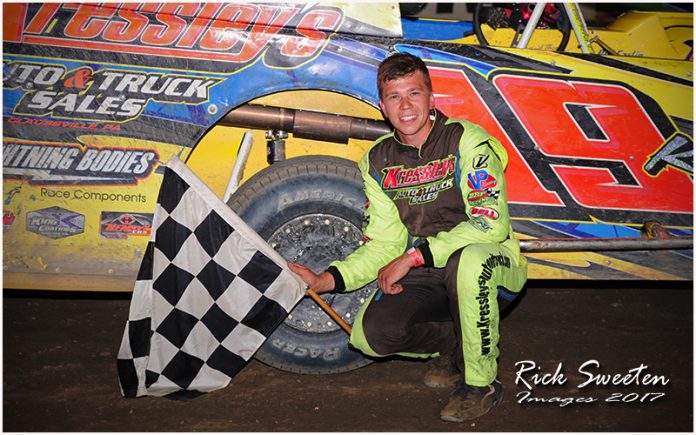 SWEDESBORO, NJ – As the field took the halfway flags from Bridgeport Speedway starter Ken Golden Tuesday night in the 358-Modified feature, Brett Kressley was settled into the second spot as leader Ryan Godown set the pace. Godown had pulled out to ten car length lead in the Searock Fabrications No. 17 and looked to be in control of the 25-lap feature event.

Kressley, whose luck has been anything but good this year until recently, finally caught a break when the caution flag flew on lap 17 for a spinning Roger Manning. Kressley, who had been running the low to middle groove for much of the first 17 laps, knew he had to do something different on the restart to make something happen if he wanted a chance at the checkered flag.

While making laps under caution, Kressley used that time to scope out the track to see what his options were on the restart.

“I was starting to get loose on the bottom and I studied the track under the red flag and it still looked like it was pretty damp up top and still had a lot of bite so I figured I could just zing it in there on the restart and see what happens. I had nothing to lose at that point and just went for it and it all worked out for me. Once we got the lead I could see the bottom starting to slick off a little bit and I thought we were going to be okay running the top.”


After taking the lead from Godown on the restart, Kressley was never challenged again and sped off to his third win in the last month. Kressley did have to survive a late race caution that allowed Godown to reverse the result of the last restart, but Kressley was up the challenge and ran off to a safe margin to pick up the big win. All three of Kressley’s wins have come at different tracks showing the versatility of the young driver.

Kressley out of Orefield, Pa., is just happy to be where he is at now with their race team and is hoping all their early season troubles are behind them.

“We are on quite a roll right now, this is unbelievable minus the little issue we had on Saturday. We are having a stout run of it right now and this is most definitely the high point of our season so far. All of that bad luck we had earlier in the year is starting to get canceled out finally.”

When I first saw the Searock Fabrications #17 TEO chassis come out on the track for warm-ups I had just assumed it was the team’s regular driver Ryan Grim behind the wheel. When I heard track announcer Jeff Ahlum say it was Ryan Godown behind the wheel of the #17 I was surprised to say the least. I immediately made a bee line to Godown’s hauler in the pits to see what the story was and why Godown was in the seat of the car.

After Godown exited his car from warm-ups and talked to his crew, I was able to get a word with him. Ryan explained to me that this is the #17 that Grim had been driving on Saturday’s at Grandview. Grim is now going to use the car that he had been driving at Big Diamond at Grandview and cut his racing to Saturday’s only. Grim has struggled all year with this car and car owner Steve Searock thought maybe that letting Godown use the car that maybe a different set of hands and eyes could get the car going in the right direction.

This Teo chassis is different from the Teo chassis that Godown has been running at Big Diamond and he said it is going to take some getting used to. Godown went on to explain that they think they found some things on the car that needed to be corrected and is hoping tonight’s second place finish is a step in the right direction.

Godown led the first 17 laps of the feature and looked to be heading to victory until the caution came out. Choosing the inside line on the restart proved to be the wrong choice in the long run but at the time Godown felt that was the best option for him.

“Being the leader of the race and starting up front sometimes is a disadvantage when it comes to picking a lane for a restart, but hey you got to give to Brett. He runs good here and runs the top well here so you can’t take it away from him. He got a wheel on me on the jump there and I am not sure if he is running gas or alchohol but when he got the wheel on me coming down the frontstretch I couldn’t get up there and slide it up to the top.  I got stuck in no man’s land there in the middle.”

All-in-all Godown was happy with the team’s night and looks forward to getting back on the track with the car. The car will be re-skinned at a later date with Godown’s familiar #26.

“We’re happy with tonight. It’s the first time I’ve been out with this style of car and obviously my style of driving is different from Ryan’s (Grim) so we had to make some adjustments on the set-ups to fit my style.  We took some notes from earlier in the year. It was a little hard to get it where we wanted it but hey this is the first time we’ve run a Teo car here with a small-block and not a big-block. We probably could’ve tightened up a little more but in the end we did alright. Don’t get me wrong, I am not making any excuses. We got it pretty close tonight and we were one spot from winning the race.  For the first time all year we had a good draw so that obviously helped. There is still a lot of things we can do to make this car better so we’ll make some notes and load her up and hopefully we’ll be better for next time.”

Watt Drives from Deep to Third

Being the hottest driver in the NJ/PA area over the past two months, you would think that Ryan Watt would not be happy with a third place finish. But on this night, the Boyertown, Pa., driver was okay with what their team had accomplished on the night.

The Roberts Racing #14W team has struggled all year with their 358 spec motor program. The team has run quite a few 358 races at Grandview Speedway throughout the year and just never seemed to get the car to where Watt thinks it should be and it definitely is not from a lack of trying. The team has tried multiple set-ups on their Troyer chassis throughout the year.  Last night it finally seemed that they have taken a step in the right direction.

After redrawing the 12th starting spot for the feature, which was the worst possible spot he could get, Watt fought and clawed his way to a strong third place finish and was starting to pressure Godown for second when the checkered flag flew.

“The car was fast tonight but with these spec head motors everybody is so equal you know? We just kept fighting our way to the front and maybe with a couple more laps we could’ve got second but we’ll take a third for the night. It’s really like running the crates down here again, you have to make your car free and our car was starting to bog out on me going through the corners. I was running the bottom earlier but towards the second half of the race I had to go up top to keep the momentum going. I could run into corner harder using the top but when I would get to middle of the corner they would pull even with me and I had to be careful not to get pinched into the wall coming off the turns. It was an okay night for us tonight all in all.”

Eric Kormann made a rare 358 start in the Dan Sommeling #22 Bicknell chassis. Billy Pauch Jr was slated to drive the car but had a work commitment and could not make the show. Kormann was asked to drive the car for the night to shake it down. After a problem in his heat race causing him to drop out, Kormann drove the car to a strong eight place finish in the 25 lap feature…

Sportsman drivers, Matt Stangle and Roger Manning were both in the field tonight with 358 motors under the hoods of their Modifieds. Unfortunately neither driver was able to fair well in the night’s feature…