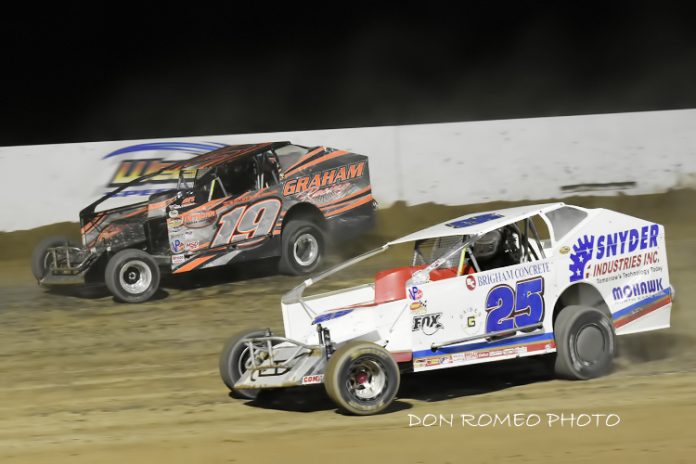 You never know exactly where Erick Rudolph is going to show up for a big-block or small-block Modified race.

Talking about his schedule as he relaxed outside of his trailer prior to the Hall of Fame 100 at Weedsport, Erick said, “I have to race where it makes sense for me. I make a living racing so I really have to do what is right for me.”

On Sunday night he brought the small-block to Utica-Rome and came home with a King of Dirt 358 Series victory over Marc and Alan Johnson.

He said, “It was my very first win at Utica-Rome. I’ve probably raced there less than 10 times.”


Continuing he said, “I am glad it was a successful show at Utica-Rome and I am glad we went. It was close enough from home to compete there and it was fun.”

When asked if he would like to run the small-block more often at tracks like Utica-Rome he said, “It isn’t up to me as it is up to the promoters. They have to schedule shows that are right for them and can make them money,”

However, you get the feeling that when King of Dirt 358’s return on August 20 Erick Rudolph will be in the field.

Erick feels good about his 358 as he confidently, but matter-of-factly, said, “I would put my small-block program against anybody.”

A couple of days later he had his own big-block at Weedsport where he finished a solid fourth place in the 100 and had it not been for a late yellow he might have had a shot at third as he was closing in on Larry Wight and traffic was causing chaos.

Erick runs both levels of Modifieds well, but said , “I think my driving style fits the small-block a little better than the big-block. There is less power and you can drive harder while you have to feather foot a big-block more. However, what ever I drive I race hard.”

While he owns some of his equipment he also runs regularly with the Chrysler team at a variety of shows throughout the Northeast.

Erick isn’t running the Super DIRTcar Series full time this year saying, “There are other races closer than the tour shows that really just make more sense for me. I have to consider travel and expenses when deciding where to race. It has to be a feasible option for me and I go to the tour races that are close to me.”

Erick hails from Ransomville in Western New York where there is a prevalence of small-block racing.

He said, “I’ve run Merrittville and Ransomville, but this year I am full time at Ransomville.”

Big-blocks are a different animal than the more comfortable counterpart, but Rudolph noted, “I can sharpen my skills in a Big Block and I really think that in the last few years I have come a long way.”

For three generations there has been a Rudolph racing somewhere in Western or Central New York or Ontario or even on the NASCAR big stage.

Charlie and Jim Rudolph were familiar to fans and at a young age Erick started his racing journey.

Erick noted, “I started go karts on dirt and indoors at five or six years old and when I was 12 or 13 it was TQ Midgets. I then ran Sportsman on asphalt at Lancaster and did Asphalt Modified racing and even some NASCAR Modified Tour racing.

The number 25 is emblazoned on the side of the Snyder Industries-Mohawk Northeast-Brigham Concrete Big Block.

When asked about his number Erick smiled and said, “It was my football and lacrosse number in high school.”

Well he is now well removed from high school, but still carries that 25 as he travels the interstates and rural roads heading to the speedways he chooses to run as he strives to make a living in a sport that has been his family destination for three generations.