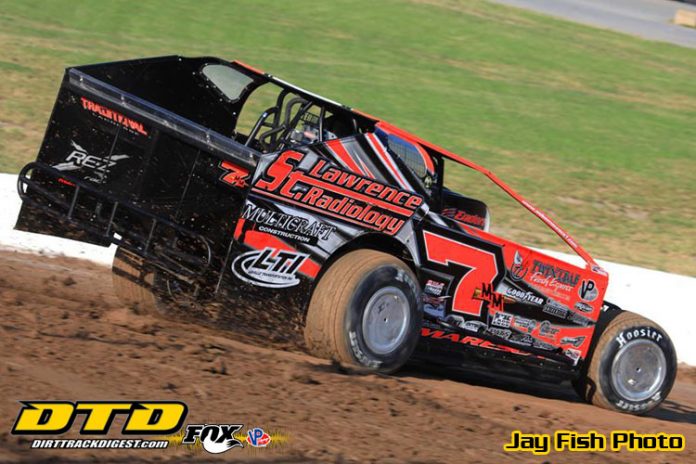 “It’s been better than expected and it’s been worse than expected”, said second year Modified driver Mike Maresca as he looked back on the early portion of the Super DIRTcar Series Tour.

Maresca drives the St. Lawrence Radiology-Twin Leaf-LaValle Transportation-Multi Craft Construction 7m based in his hometown of Potsdam, N.Y., and this year the team decided to dive into the tour full bore with expectations to complete in the 2017 campaign.

Mike said, “When we’ve finished I think we’ve finished pretty well, but it has been a tough season as when we don’t finish well it can be tough on our first time running the tour full time. However, we are making progress each time out.”

One of those “tough” times was the stop at Outlaw Speedway in Dundee, N.Y. as the car barrel rolled several times before coming down heavily. And it was only hot laps.


Maresca, looking back at that night said, “I really feel we had a really fast car and it was a tough ride as I might have gone in a bit sideways and fast.” That car ended up being written off and it was back to work.

The young driver is learning quickly the tour isn’t exactly a friendly place to be. He said, “It can be a burden. All the big guns are here and you have to come out ready. It is tough. There are some tough nights, but we are getting better.”

Fortunately getting to the races isn’t as difficult as it could be.

Maresca is a Freight Broker-Carrier Manager at LaValle Transportation in Potsdam. He said, “They give me time off and are cool with me racing.”

This year the tour isn’t the only relatively new thing as he has taken up residence on weekends at two different speedways.

He explained, “We are running at Fonda and then going to Utica-Rome on Sunday. There just aren’t big-blocks where we are. Fonda is tough with a lot of good guys who can win.”

Mike has established a few goals for himself for ’17 as he noted, “I would like to get a few local wins and maybe come top tens on the tour.

Even though Mike Maresca has been behind the wheel of race cars for quite some time it is actually only his second full time in Big Block Modifieds.

Looking back at his career he said, “I was an asphalt late model driver and ran in Virginia, North Carolina and at Adirondack. Asphalt isn’t that big around here right now. I had come from a dirt background racing dirt bikes when I was younger and enjoyed it. So we moved over to the dirt cars.”

At the Hall of Fame 100 at Weedsport he finished sixth, missing an automatic qualifying spot in his heat, but rallied for fourth in the consolation.

Mike lined up 24th on the starting grid for the century grind and came home 21st.

Maresca is patient and so he does what racers do.

The 7m will load the hauler after competing at Utica-Rome on Sunday night and venture off to the next two tour destinations next week at Eldora and Sharon Speedway.

It is expected the results they desire will come and the team is solid enough to get it done.