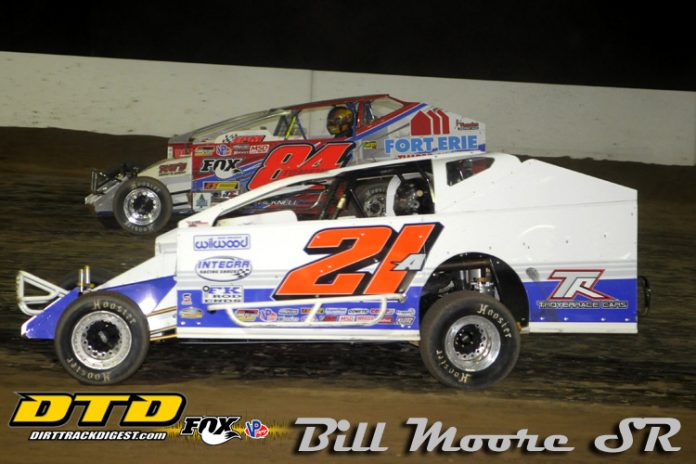 Tuesday night the Super DIRTcar Series invaded the Weedsport Speedway for the Hall of Fame 100. A total of 100 tours around the ultra-modern 3/8ths adding a little spice the night before with the annual Hall of Fame induction ceremonies.

Most of the headlines will either centered around the pioneers that were enshrined such as Alan Johnson and Steve Paine who traded induction plaques for helmets or the thrilling duel from start to finish between Stewart Friesen and Tim McCreadie.

The Stewart/McCreadie was a battle for the ages, two of the very best to wheel the heavies driving for mega-teams of Halmar International and Sweeteners Plus. It came down to last corner, last lap and was decided by half a car length. Who won? I’m sure you read that here in the pages of DTD already.

This piece is about an Australian that finished fifth in that 100 lap affair… Now a fifth place finish isn’t really headline worthy unless you are a Satutrday night privateer that took some of the money away from the tour regulars. Or…unless you are Peter Britten.


The 2017 season has kinda done a 180 for the likeable driver that spends most of his time now in the States over his native land down under. Gone is the help and resources from several which included financial and knowledge from HBR (Heinke-Baldwin Racing).

While he still has a place to work on the car, Britten stayed Troyer faithful with HBR turning their alegiance over to Bobby Hearn and TEO. Britten has a relationship with Billy Colton from Troyer and he continues to fly the flag from that camp. There is nothing wrong with staying loyal and driving a Troyer piece, it’s just Britten had to change things up a bit.

“I guess we are now what you call a small time team with me trying to build it back up again to where I can race the way I want too,” said Britten in that ever so familiar Australian accent. “This year you have to think if that one extra spot is worth it where you could chance wrecking your car. It’s not really what I want to do now, but what I have to. I need to keep some prize money coming back to keep myself on the road.”

With the changes, Britten set up his team to run the DIRTcar Series and just that. The off-season was full of question marks until the Romano family came along and gave him a ride at Albany-Saratoga weekly. That helped in needed home track bonus points where if you are going to run the Series and then also get a pay envelope at seasons end you need as well.

So far, so good on that end. As of this writing he is leading the points in Malta, NY. “Yea, we are going fiarly well there,” Peter said with a smile. “We still not quite where we could be but to lead the points against the competition that is there shows you we have a real good team”

Britten went to Florida and was at the tour’s point opener in Fulton. True to his word he was on the tour and hitting the events, but the finishes that he was accustomed to weren’t quite there.

“We started out on some older equipment, the car and motor had some laps on them and not really what you want to do but until the new equipment was ready it’s what was there,” Britten said looking back, “We were finishing but not where you like and also throw in some tracks like Bridgeport and Outlaw that I have never been too it made it a bit tougher.”

Then came Airborne Park and the reality of 2017… The tour regulars were all there in front of a huge crowd where the Plattsburgh, N.Y., facility made it’s return to dirt. Most were all there with an exception of the white #21A. Britten had to make the choice to stay home.

“That was tough, it was a combination of I couldn’t get help or what I could get would have made it too late to get there in time and just being ready,” Britten went on. “It’s definitely different when a lot of it is what you have to do by yourself and I have a daughter this year so your focus has changed also. I wanted to be there but I just couldn’t make the trip.”

But, Britten did reassure that the plan is to make all the tour races from here on out which includes the long trip to Eldora. “We are defintely gearing up for the rest of the tour, we got a good Troyer now and CC Performance has given me a damn good engine,” Peter continued, “So we are set up the best that we have been so far this year. But, your focus has definitely changed, you don’t worry so much about having a nice hauler and stuff to making sure the car is ready for the next race.”

While it has been indeed a 180 turn, what makes this story unique is that Peter doesn’t cry the blues or throw the “woe is me” out there. Instead he is spending every minute of every day getting the team built back up and he will tell you that he’s not scared of a little hard work. Also, if you swing by the pit area he is always greeting folks like he’s a lucky man with an ever so upbeat attitude.

There is indeed a plan for the future as well, “I’m trying to set myself up so hopefully someone would like to put their name on that blank quarter panel, help build my career,” Britten said confidentaly. “We keep the car looking professional at all times as you want to look good out there for people to see. Mandee Pauch is starting to help with some PR which helps in getting the word out.”

The fifth place finish is also a start of some momentum, “It was a good run at a track that I really wasn’t good at last year at so yea,” Britten went on about the night. “I had a good car and got Tim (Fuller) there on that restart. I didn’t have anything for the leaders but a good car and it’s nice to finally get a top five.”

“We are coming up on a stretch where I hope we can get some good finishes, tracks I’ve been too and usually they get slicker in the summer,” he continued, “It’s just a litte more of what I am used to and you need to taek advantage of that.”

Before we ended our brief convo, Peter definitely wanted to thank those that helped him. Billy Colton has been in his pits many times watching and learning, prodviding his knowledge to make not only the driver faster but his cars faster too. His main crew guy Tracy and Rich who gets the hauler down the track Peter knows are invaluable.

Peter Britten, from, Brisbane, Queensland, Australian like he said “We are just a small time team now but not afraid of a little hard work.”