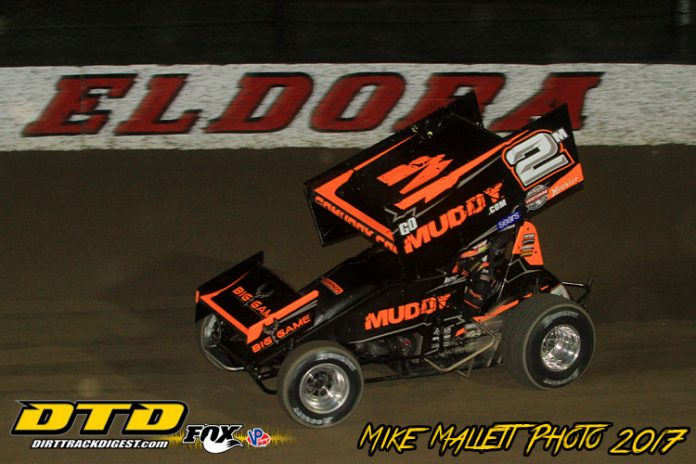 It’s no secret that Kerry Madsen loves the Eldora Speedway. The former Kings Royal Champion has always had a knack for taming the lightning quick half-mile speedway in Rossburg, Ohio. He simply has no fear of running the top.  On Thursday, the love affair continued for the Australian born driver as he picked up the Joker’s Wild win, only this time it came with some complications.

Madsen spent several minutes receiving treatment in the infield care center following the conclusion of the 30-lap, World of Outlaws A-Main.  Madsen had something come into the car causing a gash to his right hand. The results was a blood filled glove to go along with the feature victory.

“I had big rock or something hit it on lap five or something,” said Madsen after getting stitches. “I could see the blood in the glove. It was hurting, but I kept going.”

He added, “A couple times the car took off on me and I didn’t quite have the wheel, but you know, you just drive it hard.”


Madsen turned in a dominate performance as he used a slider through turns three and four to capture the lead away from Outlaw regular Brad Sweet. He got a spectacular run off the second corner which allowed him to carry the momentum through the next two turns.

The bottom seemed to be the preferred lane around the track after rains soaked the facility for nearly two hours pushing back the start of hot laps to well after 10pm. As a result, the moisture never gave up along the inside wall. Madsen went against the grain early and went to the outside. It’s a line that usually works for him at Eldora and it did again on this night.

“I just like running the top here,” joked Madsen. “Obviously you weren’t going to get to traffic and just pass them where they were running. I felt quick there and the car was working good, so I stayed up there. If you are running wide open you just stay where you are. I thought the bottom might slow down a little bit, but when we got to traffic it made the top so dirty it was just so hard to really get your lines. I went back to the bottom and felt really good. If the car feels good and you’re wide open you just keep doing what you are doing.”

It was Madsen’s fourth win as a non-regular with the World of Outlaws in 2017. He’s competed in just 16 events on the tour amassing 11 top five finishes in those races. It was another strong showing for the GoMuddy team.

Madsen’s weekend continues on Friday with the Knight Before the Kings Royal where there will be a $12,000 paycheck on the line. He’d love another victory as he gears up for a go at a second Kings Royal win, his last coming in 2014. Plus, a $50,000 check at the end of they day doesn’t hurt either.