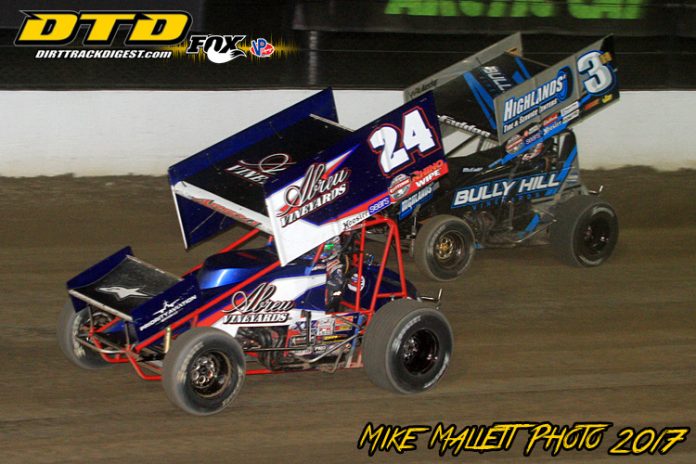 It was a good night for Tony Stewart…

Not only did the picture perfect night produced a mammoth crowd where the 50/50 was $14,250 but also he saw the TSR (Tony Stewart Racing) Team cars finishing one and two. To the crowds delight it was Norman, Okla., driver Christopher Bell besting Donny Schatz in what was a fierce battle.

A double-file restart put the third place starting Bell and sixth place starting Schatz side-by-side. Bell chose the low line despite running the extreme cushion most of the race. Bell did get he jumo but Schatz set himself up for an attempt to pass coming off turn two. Side-by-side down the backstretch with Bell just hanging on to the lead. Bell then opened up distance in the closing laps to take the $12,000 triumph.

Another person that was all smiles afterwards was Bell’s crew chief and long-time Stewart faithful Jimmy Carr. He is the man that keeps Tony’s and Tony’s other car for Bell race ready no matter where the team might travel to and sometimes on a very short notice.


Runner-up the night before was Brad Sweet, he was now a third place fnisher on what he would call an average car so far on the weekend. He’s been taking advantage of starting positions and redraws to make for some top finishes.

Brian Brown, who had us wing in what they would call “in the trunk” had another finish in fifth and he was surrounded by a pair of Madsen’s who also showed speed again.

If you were a betting person to see who will take home the $50,000 Kings Royal prize, Sweet, the Madsen’s, Schatz, Brown and Shaffer have been the most consistent over the first two nights. Bell of course will throw his hat in the ring and if he could get a good qualifying run Rico Abreu.

In talking to Rico afterwards you can sense the frustration even though he kept a smile for his long line of autograph seekers.

“We just need to qualify, it’s as simple as that,” Rico dead-panned.  “You can tell we have a good car but coming through the B-Main each night won’t set you up for a win. We will go over the car tonight, look at the track tomorrow and get this thing fast right from the start.”

Another driver that can use a good qualifying run is Pennsylvania’s Brent Marks. He was the hard charger river from both nights. He and Paul McMahan used World of Outlaw provisionals to start the 30 lap A-Main.

Schatz actually had a throttle linkage break during his hot lap session, he did make it out for a later session and then promptly set fast time for the night.

Chad Kemenah missed running his dash as he had to do and engine change.

After a rough first night, Shark Racing of Logan Schuchart and Jacob Allen were seeing wings being swapped as well as other parts. Logan was fast and made his dash, while Allen qualified fast but was a victim of not getting good original starts and was a DNQ.

Dundee, Michigan’s Dan McCarron is making his first ever trip to Eldora behind the wheel. While still looking for the speed he needs, he is taking in all what is offered by, well Eldora.

Surprising DNQ’s from both nights have been Parker Price-Miller and Trey Starks.

Tonight marks the 34th Annual running of the Kings Royal classic, Jac Haudenschild, Dale Blaney, Joey Saldana, Jason Sides, Donny Schatz, Daryn Pittman, Brad Sweet, Kerry Madsen and Shane Stewart are past winneres expected to be the in the field….or will it be a new driver wearing the crown and carry the sceptre?