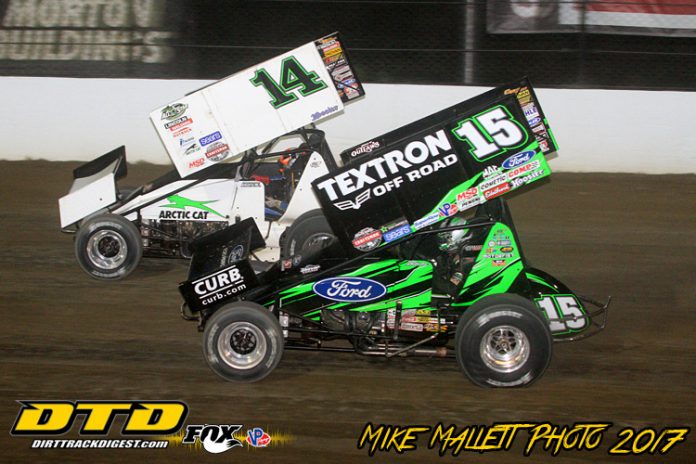 Christopher Bell has seemingly won in every kind of car he’s ever driven around the Eldora Speedway. The Norman, Okla., hot shoe has wins with a Midget, a Silver Crown car, a 360 Sprint Car and even with the Camping World Truck Series. One thing missing from the resume was a win in a 410 Sprint Car. Not anymore.

Bell added to the career win total on Friday by holding off Tony Stewart Racing teammate Donny Schatz to claim the Knight Before the Kings Royal 30-lap feature for the World of Outlaw Sprint Cars. It was a hard fought battle with the defending Outlaw champion, but one that he was able to overcome on his way to a $12,000 win.

“It’s a dream come true,” said a still smiling Bell from the media center after the event. “To be able to drive for Tony (Stewart) is a dream come true. To win at Eldora Speedway on Kings Royal weekend with the World of Outlaws, I’m just speechless. I’ve had a lot of good runs at the Kings Royal. I think I’ve been running in the top three the last couple of years and crashed, so to be able to win one is really special.”

He later added, “This place is my favorite race track in the world. I’ve had a lot of success here and I’ve had a lot of hard luck or bad luck. Some of it self-inflicted. I’ve been able to win here in a Midget, a Silver Crown car, a 360 winged car and now with the Outlaws, and a truck too, I forgot about the truck (NASCAR Camping World Truck Series). It’s been really good to me the last couple of years. I’m excited to try and get a big one tomorrow and a truck win on Wednesday.”


Bell started on the inside of the second row. He watched as Brad Sweet battled Brian Brown to get the lead at the start of the main-event. Bell quickly worked over Brown before setting his sights on leader Sweet. Sweet caught traffic and before he could defend Bell went by for the lead on lap 10.

Bell motored away from the field working the high-line to negotiate his way through the slower cars at the back of the pack. As he plowed through, Schatz was busy doing work of his own. Schatz moved to second on lap 20 with caution coming on lap 21 for a slowing Sheldon Haudenschild.

This setup the epic teammate duel for the final nine laps of the feature. Bell immediately went to the top at the green in turns one and two and again in turns three and four. Schatz pulled alongside and hung with him for two laps before Bell just squeezed in front of him coming down the backstretch to take the line and, more than likely, the win away from Schatz.

“I think the caution helped me out big-time because I was struggling in traffic,” commented Bell. “I knew I needed to get the wing back. I had just reached for the lever right when the yellow came out. At that time I didn’t know the bottom was where I needed to be. I got my wing back and went to the top. I was pretty good in one and two then Donny (Schatz) got back beside me off of four. I felt like I hit a pretty good corner. It was at that point that I needed to change my line down in three and four. Luckily I was able to get the momentum again in one and two to drop down in front of him.”

In the closing laps Bell was tested another time as the back of the field again played a factor. He made sure to be patient while keeping up the pace in order to not afford Schatz another opportunity to challenge him for the lead.

“I felt like I had a decent gap because every time I looked up on the big screen they weren’t showing me, which typically is a good sign when you’re not on the big screen,” Bell joked. “I figured out the bottom was good and then there were cars down there so I moved to the top. I think I caught Haud (Jac Haudenschild) and you know where he’s going to be. I kept trying to shorten up the top that way I didn’t get caught up in his air and end up crashing like I did last year in this race. I feel like I slowed down enough, but I knew if I could make clean laps and not make tremendous mistakes I’d be alright.”

The win came a day after he failed to qualify for the main-event. That is not something Bell is accustomed to at Eldora, especially when he’s behind the wheel of the No. 14 led by crew chief Jimmy Carr. He ended up finishing sixth in the Last Chance Showdown after a dismal qualifying effort put them behind the rest of the night.

“I felt really, really confident coming in here then yesterday I just struggled,” mentioned Bell. “Every time I’ve driven this 14 car, I guess I ran Kokomo, but I ran here and Volusia which are really fast half miles. Every time I hold my foot down I’m normally toward the top of the scoring pylon whenever it comes down to hot lap or qualifying. Yesterday, for whatever reason, we didn’t have the speed. Jimmy made some adjustments. I don’t feel like we have enough speed to qualify where we need to tomorrow. Obviously we can race okay, our car is really good when it’s slick. That is the most important part.”

Bell may have been questioning himself after Thursday’s effort, but there is no doubt Friday’s win gets Bell on track.  He knows he has the car that can win on Saturday night in the $50,000 to win Kings Royal.

Schatz challenged Bell over the final 10 laps for the win in final tune-up for the Kings Royal. Unfortunately, the Fargo, N.D., driver showed his hand a bit too early. As a result, Bell adjusted his groove and pulled away from the defending Outlaw champion in the final five circuits.

“I probably should have made sure that he (Bell) couldn’t see me under there until I could get by,” commented Schatz. “It forced him to change his line in three and four. He did that and it helped him win the race. That’s the way it goes.”

Schatz believed he used up his car a little earlier than he should have in the 30-lap race. That same mistake won’t happen again on Saturday night as the race is a longer distance.

“Tomorrow night is 10 laps longer,” cited Schatz. “We were good at the end and kept getting better. Where we slowed down was definitely from me over using the tires. I can manage that a little better tomorrow night because you know you got to go another ten laps. We’ll do our best and see if we can’t get it done tomorrow.”

Schatz is a three-time Kings Royal champion and the defending winner of the event. On Saturday, after his performance in Friday’s preliminary, he has to be considered among the favorites to be crowned on Saturday night.