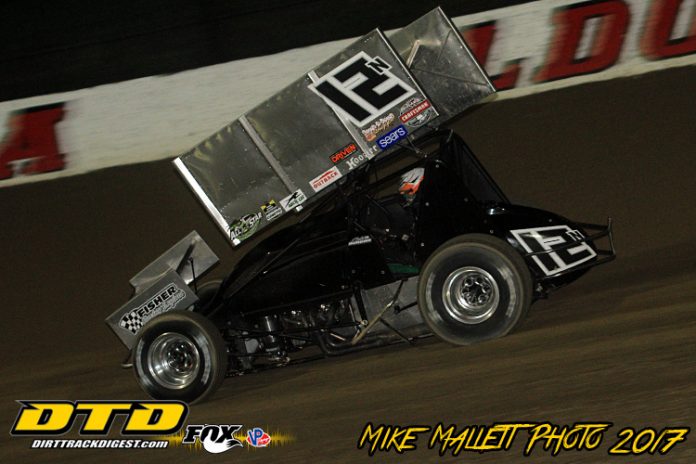 The 34th Annual Kings Royal went green to checkered with a fitting passing of the torch (septre) from Steve Kinser to the winner Donny Schatz. The Kings Royal is a part of Sprint Car racing’s Triple Crown along with the Knoxville Nationals and Williams Grove National Open.

35 years running and Schatz is the first time someone has gone back to back. As much as that seems hard to believe with names like Kinser, Swindell, Blaney and yes, Schatz himself so yes that is a story. Today’s “King” was quick to point out that receiving accolades from the original “King” was the coolest part of his $50,000 win.

The 40 lap non-stop affair had some cool stories to tell with Lockbourne, Ohio’s Cole Duncan and Kunkeltown, Pa’s Ryan Smith producing what we will talk about.

Duncan is Ohio’s blue collar worker. Has his own team and will go where he wants. A good ole fashioned product of hard work. Aboard the Ed Neumeister #12N wrenched and tuned by Charlie and James Fisher, Duncan won the sixth heat which put him om the pole for the Kings Royal.


Not only was one of Ohio’s own on the pole, it was Duncan’s first ever Kings Royal. He led until lap 14 where eventual winner Schatz took control and did his thing.

For Duncan, it was elbows up right until the double checkered flag where he crossed the line in fourth, behind Schatz, hard charger Christopher Bell and Brad Sweet. Was starting on the pole and finishing fourth a disappointment? At first, yea, but hey that’s the competitive spirit in Duncan.

“We were hoping to hold on and get a better result, but I guess to finish behind those three that’s not too bad,” Duncan went on. “You always want to do good when you start on the pole but I’m pretty sure we will wake up tomorrow and realize what we did as a team.”

Cole then went on about the race, “I’m not sure if going non-stop was good or bad for us. Schatz was just so good, no one had anything for him. I think I let Sweet get by me trying to do what Schatz was and Bell, man, he was so good on top.”

Duncan then discussed how thankful he was just to have the opportunity to make the race and be competitive against some of the best in Sprint Car racing.

“We had a good car though, Ed (Nieumeister) gives us a great car and the knowledge the Fisher’s give you how can you beat that? I so thankful to have this ride.

“I let James and Charlie get the car ready, they have a ton of experience. It’s kind of neat just to show up,” Duncan went on about the new endeavor. “They will ask questions though and I will give my opinion and we come up with a common set up. They have gotten me so comfortable.”

For Duncan, this will be a night to remember, it was hard work all week leading up to his stout finish.

“Our first couple of nights didn’t go quite as we want coming from the B-Main and such. But we learned on how we wanted to get the car,” Duncan went on. “It did help tonight as we were good from the start and put us on the position that we wanted.”

As for the future, Duncan isn’t quit sure.

“We will definitely get together again but just not sure where. We will sit down and look, we are race by race,” he mentioned on the ride, “I think I’ll be back in the 22 (his own car) here next week and then see what happens. That’s what is cool about my schedule, I can just show up and race, not worry about points and with the two cars I can do that.”

With the night winding down, Duncan was happy to great the well wishers from his home state. And with that waking up the next morning I am sure he will be proud of a job well done. Smith Comes from 24th to Fifth

“We actually decided on Tuesday night,” said Ryan Smith after his incredible 24th to 5th run at the Kings Royal. What Ryan was referring to was the decision by himself and car owner Mark Coldren to bring Coldren’s #07 to Eldora.

Doug Esh is the man that usually occupies the seat of Coldren’s sprinter and has done so quite successfully. Esh however, injured himself on vacation and has been out for several weeks. Coldren has given a few drivers seat time before Smith took over at Lincoln on July 3rd during Pa. Speedweek.

Success did come quick with three top tens. After 40 laps of effort from green to checkered and a top five to put in the memory bank, you can bet that he was all smiles after.

“This is just like a win,” exclaimed Smith, “This is pretty good, to come back from where we were and race like this. We made wholesale changes and where we started we said why not.”

Smith was running middle to low around the famed half-mile and while that could have hurt his qualifying efforts, it played into he hands come A-Main time.

“The track definitely came to me, that’s more my style. I’m not going to pound the wall down here and the car was good too. When I can run the bottom like that it’s good”

While many will give the young Pa. talent the just due, he was quick to point out it wasn’t only him.

“Jeremy and these guys got the car so good I was just driving around,” Smith went on. “We just kept getting better all week. Every lap means everything here, it’s all about getting more seat time.”

Ryan did point out that this is still Doug’s seat and he will be back in it next week, but he did give a hint that they might look at another show before then. Whether that happens or not, you can bet that driver, crew and owner will look back at the 2017 Kings Royal as one proud moment.