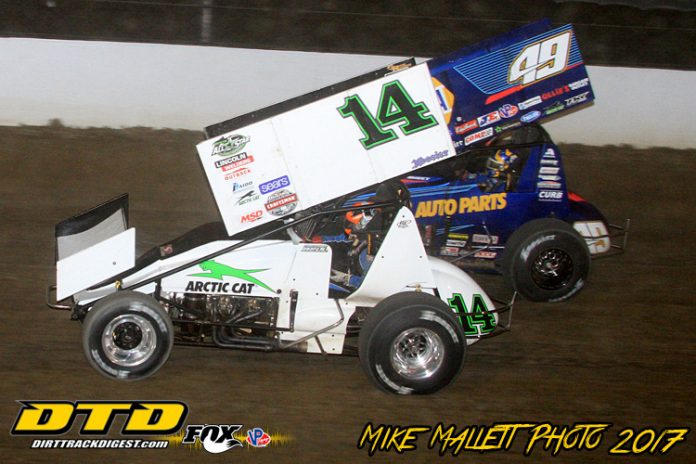 Christopher Bell’s night didn’t end with the $50,000 check or with a crown on his head, but the Norman, Okla., driver was quite possibly the star of the show. Bell drove his Tony Stewart Racing No. 14 from the 20th position all the way up to second in the non-stop 40-lap event.

Bell was obviously pleased with an effort even though he finished nearly four seconds behind race winner Donny Schatz. With that said, Bell indicated that he might have been able to make up more ground had he expected the race to go caution free, which is something that traditionally doesn’t happen.

“Starting 20th, you never know how the race is going to play out,” stated Bell. “You don’t know if there is going to be a lot of yellows or no yellows. I was just trying to run smart and take my time. I knew I had a really good car. Looking back at it, if I knew it was going to be green to checkered, I probably could have made a couple more moves to get through the field faster to give me a little more time to run down Donny (Schatz). To come from 20th to second, in a green to checkered race, is something I’m pretty proud of.”

The only real hiccup for Bell during the race was that as he battled with Brad Sweet for second the nose wing fell flat. It wasn’t an issue unless he got hung behind someone.


“I’ll be honest didn’t really matter,” commented Bell about the nose wing. “I was worried about it when it first happened. The biggest thing, it might have happened when I was racing him (pointing to Sweet), it hurt me when I was racing in dirty air because the nose kept coming up, but as far as running by myself, I don’t think it effected it.”

With Bell finishing in second, it gave TSR the top two spots in the A-Main reversing the results of the previous night’s action. Bell was very happy with crew chief Jimmy Carr and the adjustments they made to his car. Like Schatz, Bell’s car was initially strong in dirty air before the wing issues, if not better than it was in clean air allowing him to motor his way forward.

“I’m the teammate to 15 and TSR just has their program figured out,” cited Bell. “Obviously you see it year after year with Donny and the 14 car doesn’t get to run full-time so it doesn’t show it. It’s a fast car, like he said, when you get into dirty air it really shows how good or bad your car is. Because it is real easy to get stuck behind guys. My car was good enough that if guys were low I could kind of go high. If guys were high I could go low. I felt like my car was really good and I could get through traffic the way I needed to. I just wish I could have got through there a little bit quicker at the beginning of the race so that I would have had more laps to get to him (Schatz).”

Sweet Consistent; Holds on For Third

Brad Sweet continues to be consistent, unfortunately the consistency isn’t good enough to pick up feature wins. Sweet earned yet another podium finish on Saturday night in the Kings Royal. The Grass Valley, Calif., driver was in the mix early battling with leader Cole Duncan for the lead before Schatz rocketed by them both with only a third of the race complete.

“We did a great job all weekend as a team getting ourselves in great positions,” mentioned Sweet. “When the race track gets like that (slick), it’s a lot of car. You got to really focus on your car. Donny is the one that really showed everyone that over the years. He gets his car so good that it makes it hard to beat him. He can run different parts of the race track more than anyone else. That’s what we’ve been working on. We’ve got a lot of consistency in our cars but some of these races we haven’t hit it exactly right for the main-event. Donny was a good bit better. He just drove by us and checked out, and obviously, Chris coming from 20th, showed me we got to get our cars a little better.”

Sweet tried to find a lane that would allow him to pull back to Schatz, but it just wasn’t there. He knows where the team missed the setup. He’ll use this to get better moving forward.

“I searched around on the race track, but never found a spot where it was super, super good,” said Sweet. “We got some work to do, but we kind of know where we missed it. There is a lot of human element in decision making before these races and you got to make right decisions if you want to win them. I feel like we’ll learn from this and try to get better. There are a lot of good races coming up.”