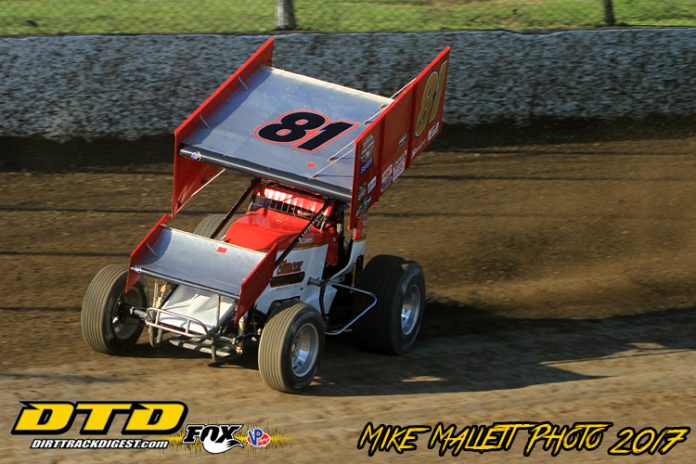 Cole Duncan and Ryan Smith were surprise finishers in the top five of Saturday night’s Kings Royal at the Eldora Speedway. Joining them, back in sixth, was Holmesville, Ohio, driver Lee Jacobs. Jacobs started the race from the seventh spot, worked his way into the mix for a spot on the podium before finally settling for sixth.

“What a night,” said Jacobs afterwards. “We qualified to put us in a good enough spot in the heat race and in the feature my crew chief AJ Havens gave me an incredible race car where I could absolutely run anywhere I wanted on the track. I can’t thank John Lewis and the entire Lewis family for giving me the opportunity to drive this race car. He’s become like a second dad to me. This operation, we want to win races, but it’s more about having fun and right now we are having a lot of fun.”

Jacobs’ night didn’t start out all that well as he had an issue with his neck that took away some of his mobility. He battled through the pain and qualified. He ended up getting treatment midway through the night which made all the difference.

“I went from barely being able to climb into the car in the heat race, people don’t know that I had something screwed up in my neck, and I couldn’t move at all,” commented Jacobs. “We had to put a pad in my seat to hold my helmet still so I couldn’t move. Thank you Tony Stewart for having an incredible care center here because they were able to help me out before the feature.”


Jacobs got rolling on the bottom of the speedway. That allowed him to pull into the cars racing at the front of the pack. He went past Tim Shaffer and Chad Kemenah before dicing it up with Duncan and Brad Sweet.

“I looked at the cars in front of me and I knew we had a shot,” mentioned Jacobs. “I knew Donny (Schatz) was going to be really good. When the track gets like this Donny is unbelievable. I knew we had a shot, maybe to get up in there and get on the podium for this deal. We just found a rhythm, found out where the car liked to roll and slowly started getting our momentum going keeping our car as straight as we could through the corner.”

His march forward ended when he got to Duncan. Duncan saw the lane he was running on the bottom and moved down to block his progress.

“Cole did a hell of job,” he said. “I got underneath him a few times down here in turns three and four where I was really good and catching the guys. He did a heck of a job moving down. He kind of took my line away from me. Then it was kind of follow those guys until one of them made a mistake. I think if that doesn’t happen we could have got up there and got to second. That is part of racing, especially in this deal. If you see someone’s nose you take off in the next corner. Cole did a good job, I’m proud for that team. That’s a small, low-buck team and what they did tonight too. It’s just a lot of fun.”

The sixth was Jacobs best career finish at Eldora. It was his first top ten and it was actually the first time he’s ever finished the Kings Royal in three tries.

“It was one of those great nights,” cited Jacobs. “I hope I have more of these in the Kings Royal, but tonight I’m going to celebrate this one.”