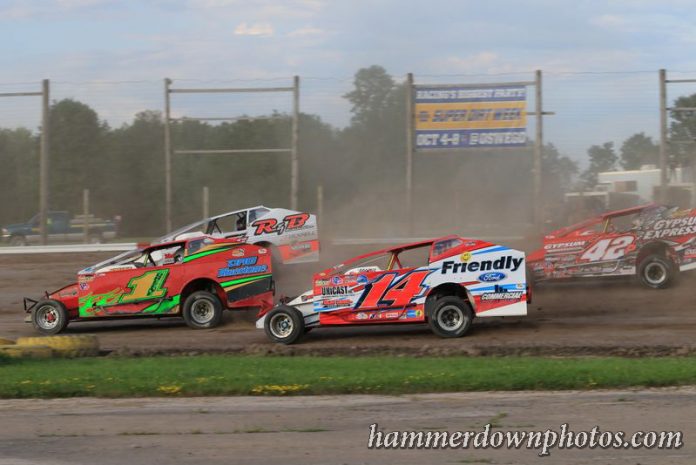 I was leaning toward another Friday night rainout as I left work. It was raining so hard in several places driving visibility was diminished greatly. I didn’t give up hope as the rain stopped and the clouds dispersed. I arrived at Brewerton Speedway at 5 PM under a mix of clouds and sun with clearer skies on the way. I was in the pits so much that I missed the Mod Lite and 4 Cylinder Stock Car features. I didn’t see a thing until a lap eleven yellow during the Modified feature.

Gary Tomkins had the race under control by that point. His experience gave him just what he needed on the restart, and every subsequent restart through the remainder of the 35-lap event to hold off anyone else’s advances. Larry Wight worked his way up through but didn’t have enough to catch Gary. Gary was elated in victory lane as he celebrated his first win of the year at Brewerton.

The Sportsman feature went pretty well until a mid race melee on the front stretch brought everyone’s hearts to their throats. Zach Sobatka maintained the lead on the restart following that caution, but Glen Forward had him in his sights. They raced side by side for a few laps as Sobatka inched ahead for the lead each time. Eventually Forward drove hard into turn one under Sobatka, made contact at the apex, and drove off the corner in the lead to claim the victory. He did apologize to Zach For the contact during the interview at the close of what I would call one of the most physical races I’ve ever seen.

Saturday I went to Rome NY to attend the family benefit for James Angell, who went home to be with the Lord on June 7th. I left after visiting with a few people and took the scenic route to Fulton Speedway.


With Can-Am and Canandaigua raining out Fulton’s pits jammed up with 48 Sportsman, 24 Novice Sportsman, 23 Modifieds, 15 Late Models, and 9 Four Cylinder Stocks. Needless to say, with one on one spectator races during intermission, it was a full show. Sean Beardsley race show way to victory lane in the Late Model feature that kicked off the night’s finales. Jimmy Phelps outpaced the Modified field to earn his first win of the 2017 season. Tyler Trump and Chris Mackey both won their respective Sportsman features, while Jimmy Moyer and Tom Juno won their respective Novice Sportsman features. Quinn Wallace won his first Fulton feature this year in the Four Cylinder Stock class.

Sunday was another beautiful day, and the double Modified features made it even better at Utica-Rome Speedway. The first Modified feature was make up feature from a few weeks ago. Claude Hutchings Jr. jumped out to an early lead, but as the field behind him found their rythym Pat Ward was able to take the lead which he never relinquished, earning his first Utica Rome win of the year. The Mike Martin Memorial Sportsman feature saw Dave Marcuccilli racing his way to the top spot and the $1000 purse. Mike Welch won the Pro Stock feature, while Jimmy Moyer swept the weekend by winning the Novice Sportsman feature. Matt Sheppard rebounded from a recent suspension to win the second Modified feature.

Over the weekend I saw a lot of great racing, but I also saw a lot of aggression in some of the divisions that led a few teams to the pits on the hook. Saturday during a driver’s meeting the Lord gave me a message that I boldly delivered. I’m not sure how it was received, but I did get one “thank you.” Since then the Holy Spirit has expanded it and clarified His heart in the matter.

The Apostle Paul must have been a race fan, at least for the Olympiad runners, because he wrote about racing a few times in his epistles. This passage resonated in my heart as the Holy Spirit began building this message in me.

“Do you not know that those who run in a race all run, but one receives the prize? Run in such a way that you may obtain it.
I Corinthians 9:24 NKJV”

In the driver’s meeting I reminded everyone that no race is won on the first lap. I also reminded everyone of the necessity of finishing a race in order to win it. You have to be there at the end to win. There is no other way to victory lane.

A lot happens between the drop of the green and the checkered flag. King Solomon, still believed to be the wisest man to ever live stated “I have observed something else under the sun. The fastest runner doesn’t always win the race, and the strongest warrior doesn’t always win the battle. The wise sometimes go hungry, and the skillful are not necessarily wealthy. And those who are educated don’t always lead successful lives. It is all decided by chance, by being in the right place at the right time. Ecclesiastes 9:11 NLT”

That’s how a race is decided every time, “being in the right place at the right time.” That’s rock solid truth from God’s Word. Wrecking is not an option if you want to win. You have to respect the equipment if you want it to go the distance. When you learn to respect your equipment and drive it to make it last, you’ll be able to push it as hard as you can within those boundaries. You’ll also learn to respect the equipment surrounding you driven by someone else.

Honoring your competitor creates an attitude of respect that makes the competition even better. There is a stark difference between hard racing and occassional rubbing, to blatant disregard for the other driver.

Paul went on in his letter to share his personal attitude about competition by saying “Now every athlete who [goes into training and] competes in the games is disciplined and exercises self-control in all things. They do it to win a crown that withers, but we [do it to receive] an imperishable [crown that cannot wither]. Therefore I do not run without a definite goal; I do not flail around like one beating the air [just shadow boxing].
1 CORINTHIANS 9:25‭-‬26 AMP”

How you run your race is more important to God than how you finish. Your attitude toward others isn’t hidden from Him. It’s not as hidden from them as you would like to believe either. The more integrity you exhibit on and off the race track the more God will be wiiling to promote you. As we learned from King Solomon, circumstances determine who wins by being in the right place at the right time.

You can create some of those circumstances by driving with your head, while listening to your heart before your foot engages the loud pedal. God will work with you throughout a race as you focus on your own character and attitude. He can create circumstances to give you an oppportunity that you can capitalize on.

I asked the drivers in that meeting to be mindful of God, and to cooperate with Him for their own safety and for their competitor’s safety. It comes down to the biblical principle of seed time and harvest, which states you reap what you sow. If you want someone’s respect, show them some. If you want someone to respect your investment, respect theirs. If you want to win, celebrate with the winners by honoring them with some congratulations.

Race cars always show up clean and leave dirty. Don’t be the driver that reflects that same pattern. Show up with a clear conscience, race your heart out cleanly within the realm of your own skills. Show that you have some respect for all the equipment on the track, and have a great time doing it. Victory lane is waiting.

We are always available no matter what comes up in your life. If you need anything just let us know. You can reach out to us at flchaplain@windstream.net, or on Facebook at Finish Line Chaplain.