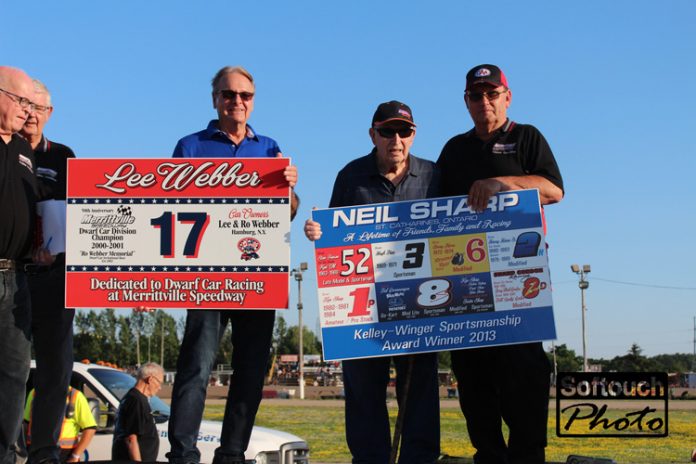 This past Saturday night, the Merrittville Speedway Reunion Committee gave two more legends of racing in the Niagara Region their place on the Wall of Fame, Neil Sharp, and Lee Webber. Neil got his start in racing in 1962 when he and Kurt Uhl fielded a car for Stan Friesen. For six decades, Neil Sharp has been a car owner and or sponsor of a list of future Hall of Famers including Friesen, Hughie Tripp, “The Canadian Blast” Davey Moore, Harvey Hainer, Doug “Flash” Gordon, Todd “Sparky” Gordon and now, grandson Justin Sharp, who competes in the Sportsman at Merrittville and Humberstone. Lee Webber got started in racing later in life when the New York Dwarf Car Association found a new home at Merrittville on Saturday nights. Webber and his late wife Rose were among a group that helped establish the division in the region. The Rose Webber Memorial was one of the highlights on the schedule, which has turned into the International Mod Lite Championships at Merrittville held each season. Lee Webber was the 2000 and 2001 Dwarf Car (Mod Lite) Champion at Merrittville.

In the second year of the Dedication Award, two more names will be added to the plaque, “The Sarge” Bill Sargent and Howard Schram. Bill Sargent would ride his bike from his house to get to the races when he was a young fan. Until son Ken became a multi-time Street Stock and Pro Stock Champion in the region, Bill was a fan until he was turning the wrenches on his son’s racecars. Today, Bill can still be seen at the tracks in the region as a fan, watching his son Ken compete at a high level. Howard Schram is dedicated to making things work at the track. Howard was involved on the crews for Al Wagner, Ray McIver, and Rob Pietz. Howard is still active at Merrittville as he has been part of the track preparation crew and helps with maintenance during the week.

Coming up will be one of the biggest weekends in the 60-year history of the Ransomville Speedway. On Friday, July 21st, the 60th Anniversary Celebration will be taking place. The speedway has invited every champion of the speedway to come and celebrate and to be thanked for making the “Big R” what it is today. FOAR SCORE Hall of Fame racer Billy Rafter will be on hand. Rafter was one of the all time greats that came out of Western New York. Two others that have also earned Hall of Fame honors include Ed Ortiz and “Marvelous Merv” Merv Treichler. Besides Treichler, Ortiz and Rafter, Don McGinnis, Sandy MacPherson, Doug “Flash” Gordon, Jim Stone, Doug Barlow, Davey Moore, Glenn “The Bomber” Baker , Ivan Little, Al Wagner, Andy Imbeault, Mark Elsie, and Terry St. Amand are just some that will be on hand. Terry Edwards, who won the inaugural event at Rolling Wheels and past Ransomville champion, will also be there, as will Pat McCoy, Rick Gorhan, Gary Waiter Jr and Jamie Woods, as well as past racers and chief starters Barry Davidson and “The Ransomville Rocket” Jipp Ortiz will be there as well.  The drivers from the past will be joined by the current and future stars of “The Big R” as well. The stars of the past will be near the front gate for a meet and greet opportunity prior to the racing program at 7:15 pm. A full program of Modifieds, Sportsman, Street Stocks, 4 Bangers and Novice Sportsman will all be in competition.

Then the attention turns to Sunday, July 23rd as the Craftsman World of Outlaw Sprint Cars return to Ransomville for the first time since 1997. “The Greatest Show on Dirt” will be joined by the Sportsman for a special $750 to win event. The best Outlaw drivers on the planet will make their mark on the historic Niagara County oval in competition on a track that most of the current drivers have never raced on and or have seen. As a fan, I am excited to be able to see the Outlaws up close and personal. As a working track PR Director, I am excited as well as I get to be in the best seat in the house seeing “The Greatest Show on Dirt” make their return to “The Big R” for the Big R Outlaw Shootout. I know that Ransomville management has been working on this event since it was announced in January and they are getting the track and property ready to host the Outlaws. The ticket booths and will call window will open at 1:00 pm, at the same time, the pit gates will be swinging open. The grandstand gates will open at 4:00 pm with hot laps at 6:00 pm and racing will get underway at 7:00 pm.


From seeing the heroes of yesteryear to the stars of today, it is time to “Remember the Past and Embracing the Future”. Seeing the all-time greats that started the sport, to seeing the stars of now going at it and then watching the future stars race at go-kart and microd tracks throughout the region, the present and the future is looking bright. When you are at the track this weekend or whenever you see a past racer, say thank you to them for starting something that you get to continue to enjoy. I say it when I announce that the drivers are the show. If it wasn’t for the drivers that started racing back in the day, who knows what we would be doing.