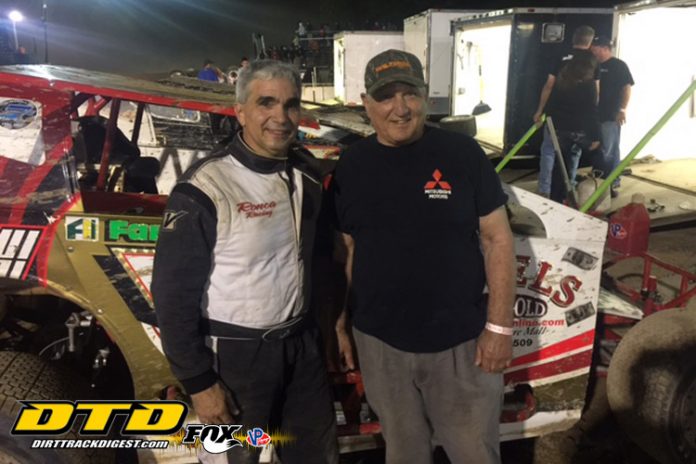 Our race week started early this week when Ed attended the Town Board meeting at Malta on Monday, July 10th.  Over the previous weekend, between Facebook and other online outlets we heard so many things about the future of the track so we wanted to see for ourselves just what the issue was.  The overflow crowd was welcomed by the Town Supervisor, Vincent DeLucia and the rest of the board.  The issued that brought about the meeting was listed on the agenda under New Business as Discussion: Noise Code- Speedway.  And that is exactly what it was. The Town Board had received four complaints about noise coming from the speedway.  Note: no complainants were in attendance.  It was great to see such great support from the racing community.  The discussion took up two hours and was well received by everyone.  The Town Board got to hear from the tracks most winning driver, Brett Hearn of New Jersey who came to lend his support.  Hearn has had his Big Show at the track the past few years.  Veteran driver and Malta town resident, Brian Ross reviewed the history of the track and its connection to the community.  Track promoter Lyle Devore said he had not received any complaints even though his number is on the big billboard out in front of the speedway.  He continued saying that he responds to every call he receives and is willing to do what it takes to resolve any issues.  The track currently employs 70 people.  A special part of the evening was when neighbors of the speedway who had never attended an event there spoke up in favor of the track.   As the crowd left the meeting is was clear that the Town Board had a better understanding of the track and its importance in the community.  Town Supervisor, DeLucia said, Malta has three unique entertainment venues, a Rodeo, Drive In, and the Speedway and he supports the continuing of all of them. Friday we were at the Great Race Place for the extra distance events that included extra money thanks to Mike Sowle of Sowle Trailer Repair.  The Pro Stocks ran 50 laps for $2000, Sportsman winner received $3000 and the Modified winner took home $4000.  The winners on Friday were Chuck Dumblewski, Pro Stock; Scott Duell, Sportsman and Don Ronca, Modifieds.  We spoke with Don Ronca after the event and he was ecstatic about the win and the extra money.  It had been nine years since he had stood in victory lane at the Great Race Place, his last coming May 9, 2008.  Ronca is tied on the Albany-Saratoga win list with Stewart Friesen and Dave Camara with 12 wins.   Don is the oldest of the racing Ronca brothers and standing with Don on Friday for this photo was his father, Nick who is also a veteran racer and Hall of Famer (see vintage photo).  The Ronca’s were especially proud on Friday of their win because it was in a 2014 Hig Fab chassis powered by a Ronca built engine with the help of Clifton Park Engine Rebuilders.  “This motor has been re-built twice within the past two weeks”, said Don.  And it was a small block on a night when we heard many say it was a big block track. Over the years we’ve met and spoken with many drivers in the sport.  This season we have had the privilege of spending more time with the driver of the No. 10 Modified, Jimmy Nagle.  Jimmy lives in Rotterdam and races at Albany-Saratoga on Friday nights.  He has been racing since 1999 when he raced go-carts.  In 2007 he moved to open wheel in a Sportsman and in 2014 made the ultimate move to Modifieds.  During his years in racing Jimmy Nagle has gained respect for his honesty and has a reputation that he is not willing to compromise for the sake of a ride.  His reputation and all around sincerity is why when this past week he put out a call for help on the car for Friday at Albany-Saratoga he got responses from Bill Menge and Tom Coughlin (N.Y.S.S.C.A. President) who were in the pits with him on Friday along with his girlfriend Julia Hudycynia doing whatever they could to help get him ready for the racing.  Jim’s sponsors this season are On Demand Handy Man, Rufus Dunright, Inc., Elite Motors and dh Graphics.  Jim is a welcome addition to any race program and we thank him. We speak often with many about what can be done to bring fans to our sport.  In just three weeks the two gentlemen at Glen Ridge have done some different things to make fans a large part of the show at The Ridge.  The first thing we saw this week was Ray Sefrin talking with some young fans with their racing flags.  The were mimicking starter Joe Kriss as he flagged the heats.  Ray then selected, by luck of a special draw, Noah LaMere, a ten year old would be flagger.  As winner of the draw, Noah was given the duty of flagging the Four Cylinder feature under the direction of Joe Kriss,.  Noah threw his first red flag of his career when his Uncle was involved in an incident on the track.  Noah’s only response after his first flagging job was, when can I do it again? Next we saw Mike Parillo throw tee shirts into the stands, always a crowd pleaser.  We approached one young lady who had caught one and found that she had just moved to the area from South Carolina.  Her name is Bianca Hoffman and it was her first time at Glen Ridge.  The only track she had been to back home was Charlotte Motor Speedway.  She plans to be at The Ridge every week.  The program at Glen Ridge was complete by 8:50 pm which means we were home in Duanesburg by 9:30 pm.

In closing we send our condolences to Kenny and Kerrie Hollenbeck on the death of their mother this past week.